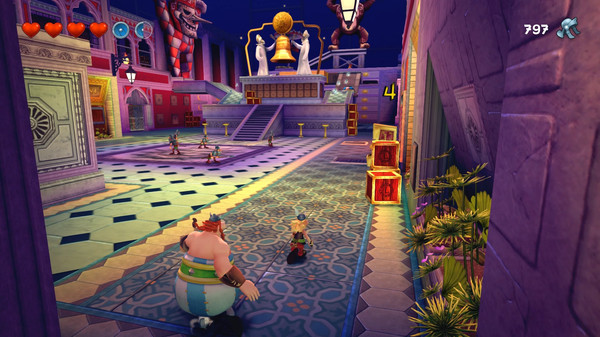 Microids has announced the release date for Asterix & Obelix XXL2 in North America.

Asterix & Obelix XXL2 will be out on the Nintendo Switch eShop on November 29, 2018. Although the special edition isn’t heading to the Americas, a retail release is in the cards, which we will hear more in the future.

The remastered action/adventure game Asterix & Obelix XXL2 is set for release, in digital only for North America on Nintendo eShop, PlayStation Store, Microsoft Store (Xbox One) and Steam on November 29th. New screenshots have been released, offering a glimpse of the game’s improved graphics and new features!

In Asterix & Obelix XXL2, players set off on an adventure to Las Vegum thanks to the inseparable Asterix and Obelix, and not to forget their faithful companion Dogmatix, who also does his bit to help fight the armies of Roman legionaries! Players will be able to freely switch between the two Gauls to make the most of their characteristics: Asterix uses the magic potion to help him overcome the Roman hordes, and can make his way through the smallest spaces with ease, while Obelix uses his incredible strength to destroy seemingly impassable obstacles.

New features of the remastered version

A new addition to the remastered version: challenges!

Asterix & Obelix XXL2 will be available in digital on PlayStation store, Microsoft Store (Xbox One), Nintendo eShop and Steam on November 29th. A retail version will be announced soon for North America.