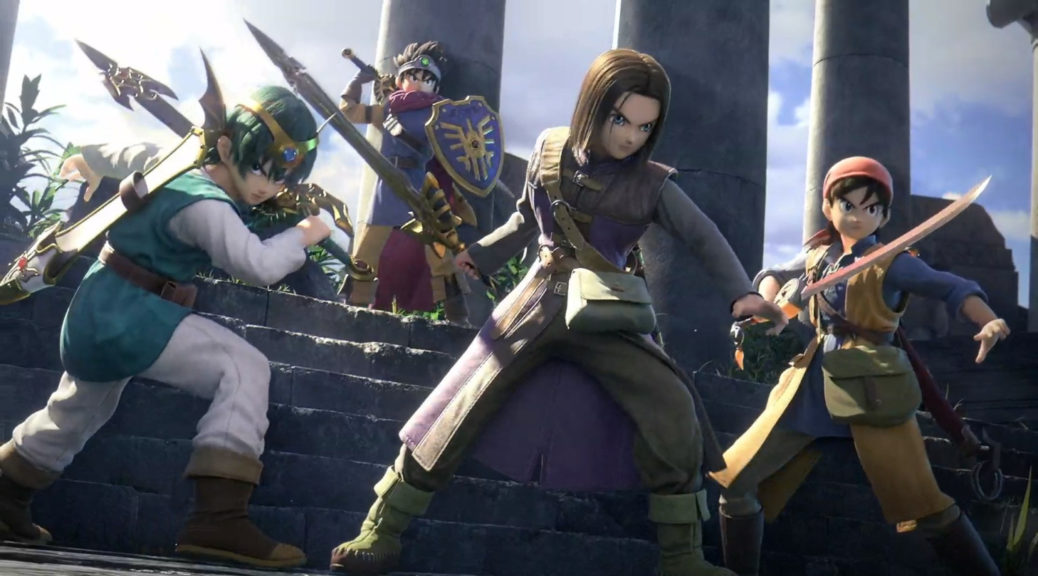 A few months ago, The Hero was released as the second DLC fighter for Super Smash Bros. Ultimate‘s Fighter’s Pass.

Although the character received a mostly warm reception, he has become a little controversial in the Smash Ultimate competitive scene. Most of the ire is targeted at his apparently “overpowered” kit, particularly the randomness of his Down-Special and Critical Hits.

Today, Nintendolife has published an interview they had with the developers of  Dragon Quest XI S: Echoes of an Elusive Age – Definitive Edition, whose main character is the face of The Hero fighter. During this interview, Nintendolife asked them what they thought about The Hero being called “Overpowered” in Smash Ultimate.

In response, Producer Hokuto Okamoto and Assistant Producer Hikari Kubota explained that although the “randomness” element of The Hero may make him a little too powerful, it also made him a great choice for beginners to keep up with veteran players, and that it could be one of the “good points” about the character.

You can check out their responses below, and find the full interview here:

NL: Okay…this is my most important question. Why is Hero so overpowered in Super Smash Bros.?

Assistant Producer Hikari Kubota: That’s because Mr. Sakurai likes him so much.

Producer Hokuto Okamoto: Is he powerful?

NL: A lot of the tournament players are debating whether or not to ban him…

Kubota: We thought that he would be an easy fit just putting him in Smash, but from Mr. Sakurai there were all these ideas that kept getting added in after the fact, like putting in a turn-based command window, as well.

Okamoto: You know, as somebody on the Dragon Quest team, we make games, like we said before, that we want people to get through from start to finish – anyone should be able to get through our games. But you get to Smash Bros. and you’re dealing with an action fighting game. As that skill ceiling increases, there are people who won’t be able to keep up, (as there are) people who can’t play at a certain level of difficulty.

So I think that with Hero from Dragon Quest XI, because that strength of his randomness is so powerful at times, that gives him the appeal of being a character that (for) somebody who’s a button-masher, (they) can get in and deliver some really powerful blows. And I think that’s kind of a good point about the character.

What do you think of their response? Let us know in the comments.