Recently, YouTube content creator Doctre81 found a job listing from EA Motive asking for a rendering engineer that has experience developing with the Frostbite Engine to help with development for an unannounced multi-platform game that will be available on Nintendo Switch.

EA Motive previously worked on Star Wars Battlefront II so this may be suggesting that the next major EA title could be coming to Nintendo Switch.

Check out the job listing below: 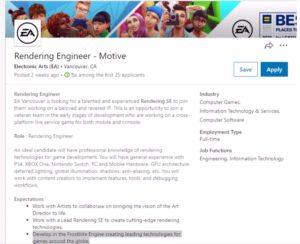 Frostbite Engine support for Switch has been previously mentioned on a former EA employee’s LinkedIn profile revealing they worked on developing the Frostbite Engine SDK for Nintendo Switch.