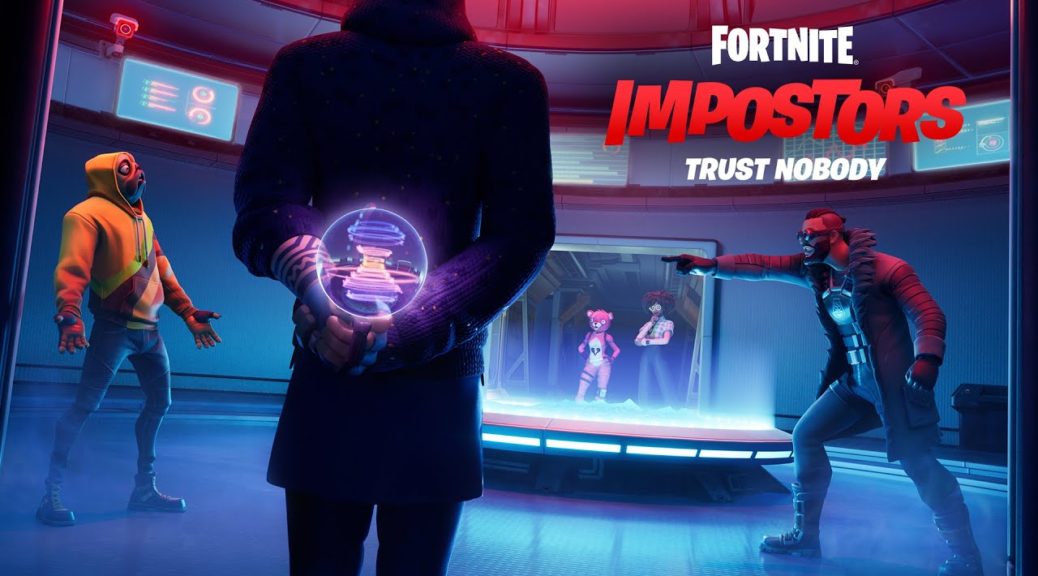 As one might probably guess from the name, this mode has players take on the role of either “Agents” or “Imposters”, with Agents having to complete various tasks on a map called “The Bridge”, while Imposters have to sabotage their progress and avoid getting voted out. This is of course highly similar to the popular werewolf game Among Us, although Fortnite Imposters does have a few differences.

You can check out a trailer below, along with the full details via Epic Games:

Fortnite Impostors is a mode for a maximum of ten players: eight Agents maintaining The Bridge and two Impostors out to overtake it. Let’s take a look at how these roles play out.

The facilities powering The Bridge are a well-oiled machine, and it’s up to Agents of the Imagined Order to keep it that way. Complete Assignments like calibrating chests and llamas, repairing the Battle Bus, and delivering Storm reports for analysis. Finish your Assignments quickly and be on the lookout for dubious Impostors or eliminated allies. Complete all Assignments or vote out all Impostors and claim victory for IO.

Work together to root out anyone masquerading as a fellow Agent, but trust nobody completely — anyone could be an Impostor. If you find a fellow Agent’s eliminated fragment, report it! Everyone will be teleported to The Bridge where you can inform Agents who you suspect might have betrayed the IO and vote them out.

The Impostors’ goal is simple — eliminate enough Agents to take control of The Bridge before being discovered. You’ll have plenty of tools up your sleeve to sow chaos along the way.

Like Agents, Impostors will have a list of Assignments they can complete to earn everyone’s trust. Be cautious, though: for every Assignment you finish, you inch the Agents closer to their completion goal.

Players can queue up with any party size and any remaining slots will be filled. To keep gameplay fair and fun, public voice chat is disabled in Impostors but you can still talk in party chat; use Emotes and the Quick Chat menu to communicate with all players.

Only want to play with your group of friends? Select the “Private” option when queuing into Impostors and as few as four players in your party can launch into their own custom game, though for the best experience we suggest 10 players. Starting a game with four to seven total players will only have one Impostor, while eight or more will have two Impostors. Also, you can change your party settings by selecting the Gear icon in your Friends list to:

Sometimes you’ll need to Force a Discussion to check in on fellow Agents and discuss the Impostor infiltration. Discussions can be called by finding an eliminated Agent and reporting it or by interacting with the Discussion panel in The Bridge’s center room. During discussions, Agents and Impostors can share information with each other via Emotes and a brand-new Quick Chat menu, asking contextual questions about who was doing what and accusing suspicious candidates for ejection.

At the end of each Discussion, Agents and Impostors will vote to either eject someone from The Bridge or to skip their vote for that Discussion. Consider others’ accusations and objections carefully: if the person voted out was actually an Agent, then Impostors are one step closer to eliminating everyone. Sometimes not voting is the best option.

The Bridge is the nexus of the Imagined Order’s power. With danger around every corner and the facility under constant threat — trust nobody.

The fate of The Bridge is in your hands.