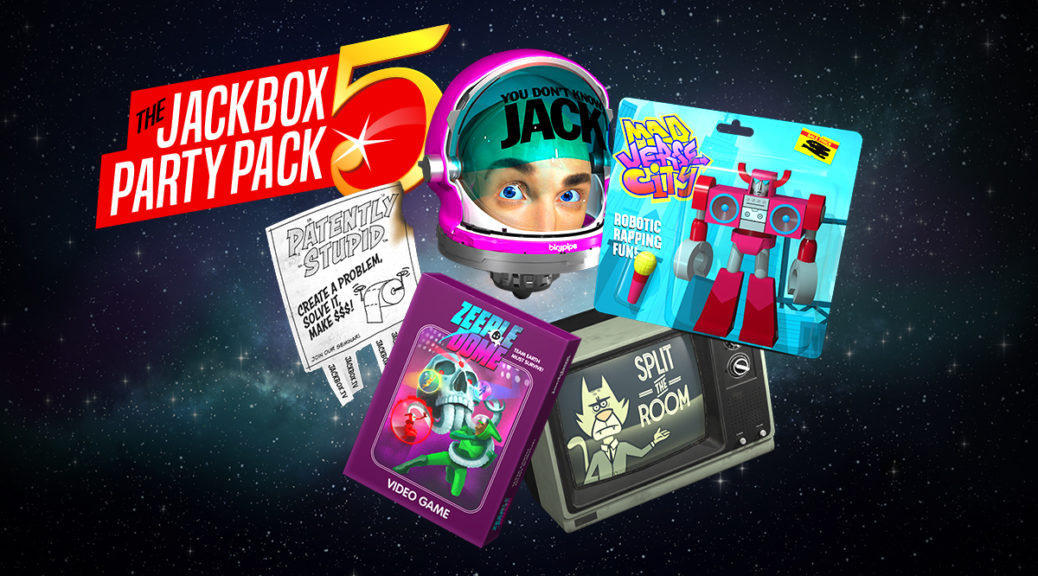 The Jackbox Party Pack 5 is the latest assortment of party games for Nintendo Switch. Fans of the series know what to expect: five funny new games in a single package to play with friends and family. So what does this latest Party Pack have to offer? 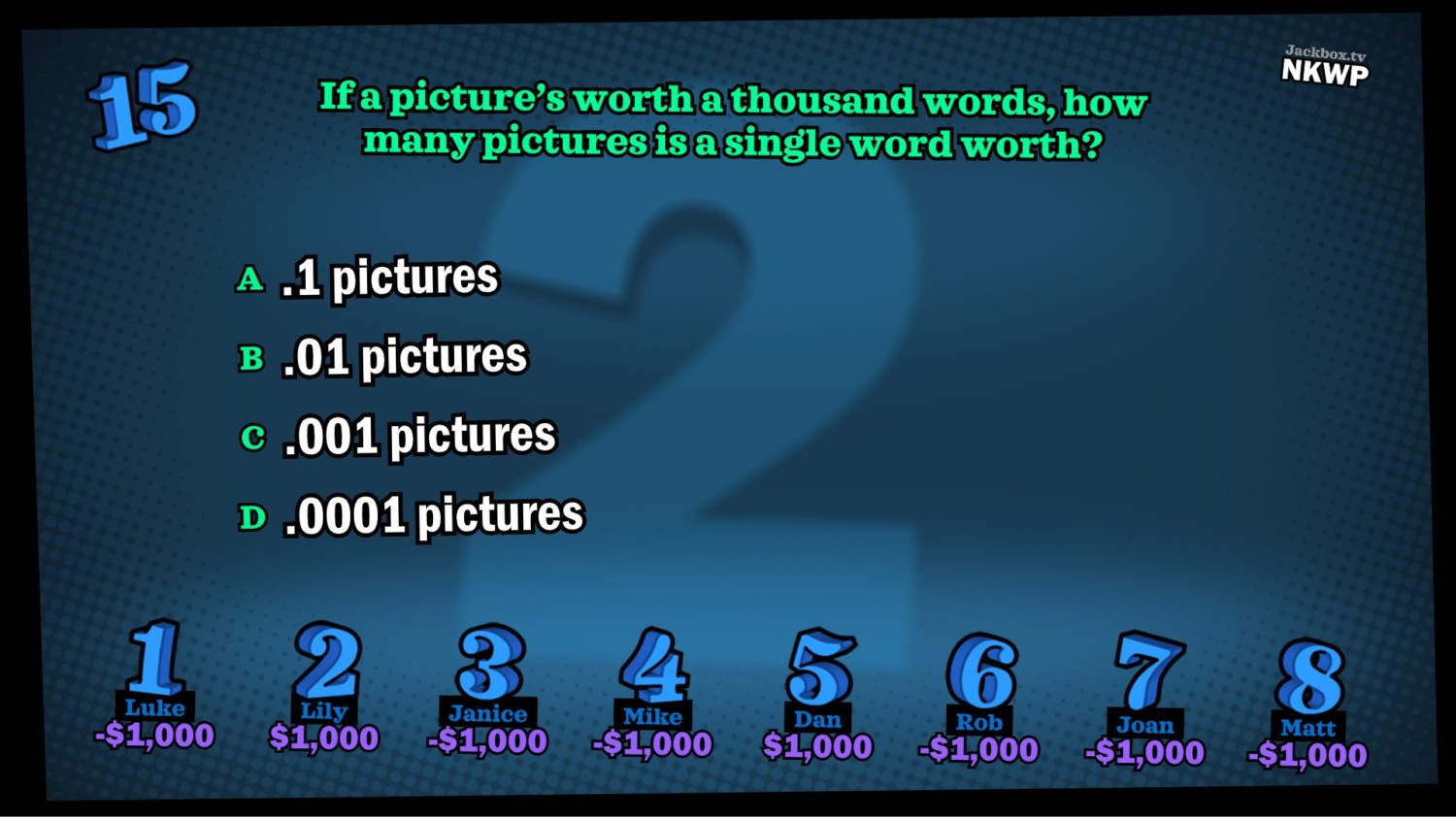 The first game, and the flagship of the bunch, is You Don’t Know Jack: Full Stream. For those not in the know, YDKJ is the storied predecessor of the Party Packs, and was originally released back in 1995! Like all Jackbox games, each player uses their own device (cell phone, tablet). YDKJ takes the format of a trivia game show hosted by the infamous “Cookie Masterson”, and players must answer his confusing questions on their device. Questions are always funny and often worded in an unexpected way. Normal questions are mixed in with the classic “Dis or Dat” and “Jack Attack” question formats, gibberish questions, and more.

The game’s presentation is top-notch as always, with hilarious narration and questions. The entire game is wrapped in the format of a video streaming service called Binjpipe, with services like Netflix being the butt of countless jokes and references. But don’t worry, long-time host Cookie Masterson is back in full force to poke fun at the players in his wry, sarcastic way. YDKJ is not only a triumphant return, but a damn fun party game that reminds us why we love Jackbox in the first place. 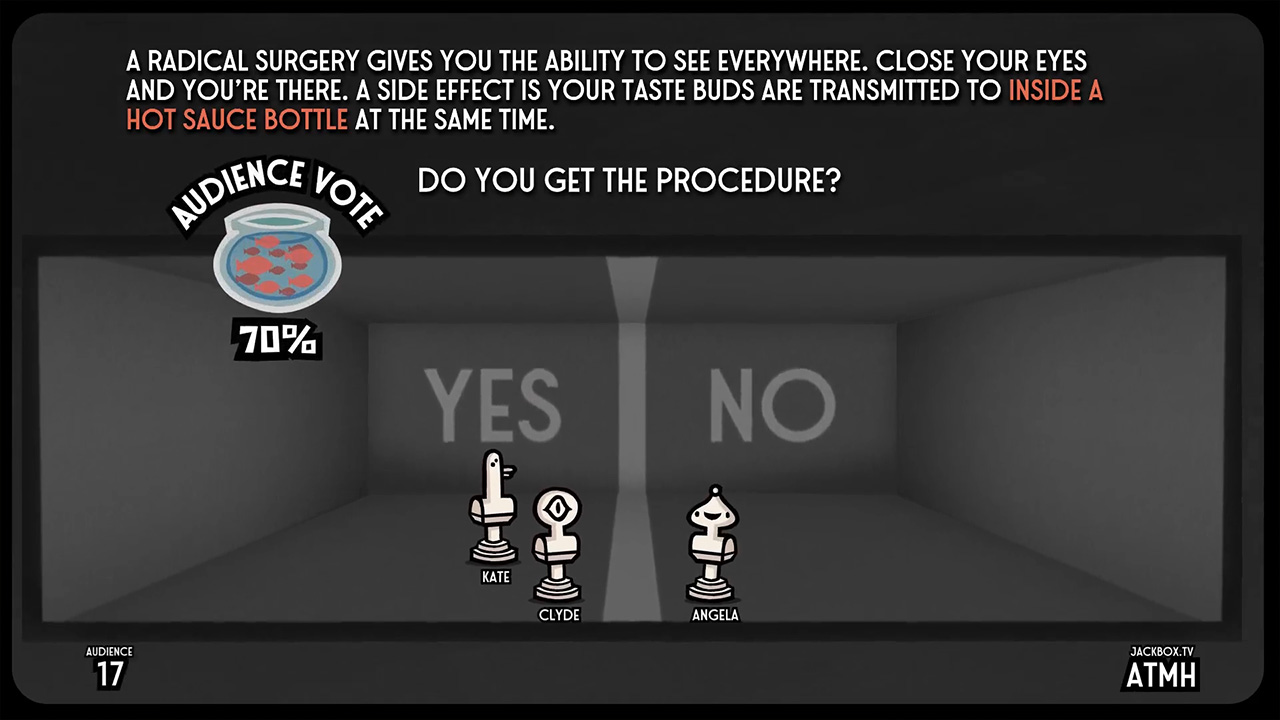 Split the Room is the second game in the pack, and offers a different strategy from most Jackbox games. Here, you are given an incomplete scenario, and must fill in the blank to create a “divisive dimension.” Other players pick sides whether or not they’d accept your hypothetical, and the closer to a 50-50 split, the more points are rewarded. It’s a game that’s difficult to explain but easy to pick up, and the Twilight Zone-esque theme gives the whole experience a mysterious feel. 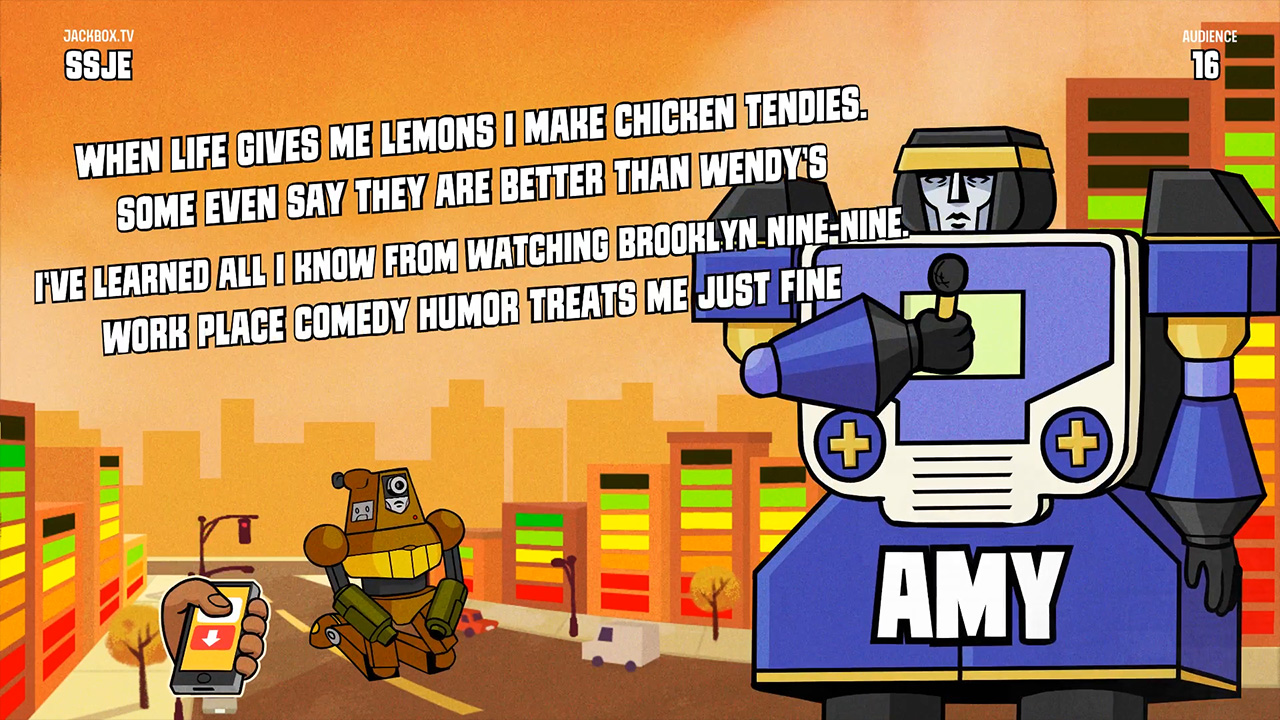 Mad Verse City might just be the best game of the pack. Players (depicted by giant robots) are paired off against each other in rap battles. It works like this: the game gives you a Mad Libs-style prompt (for example it will ask you for a food, a common noun, or an adjective) and use that to complete the first line of the rap. You must then write the second line, keeping flow and rhyme in mind. The third and fourth line are completed in the same fashion.

The best part of any game is roasting your friends, and you can specifically target your lines at your opponent in the current battle. Hearing your sick burns read aloud by a text-to-speech program is very enjoyable. Sometimes your rhymes will flow, sometimes they won’t, but that’s just the way the city crumbles 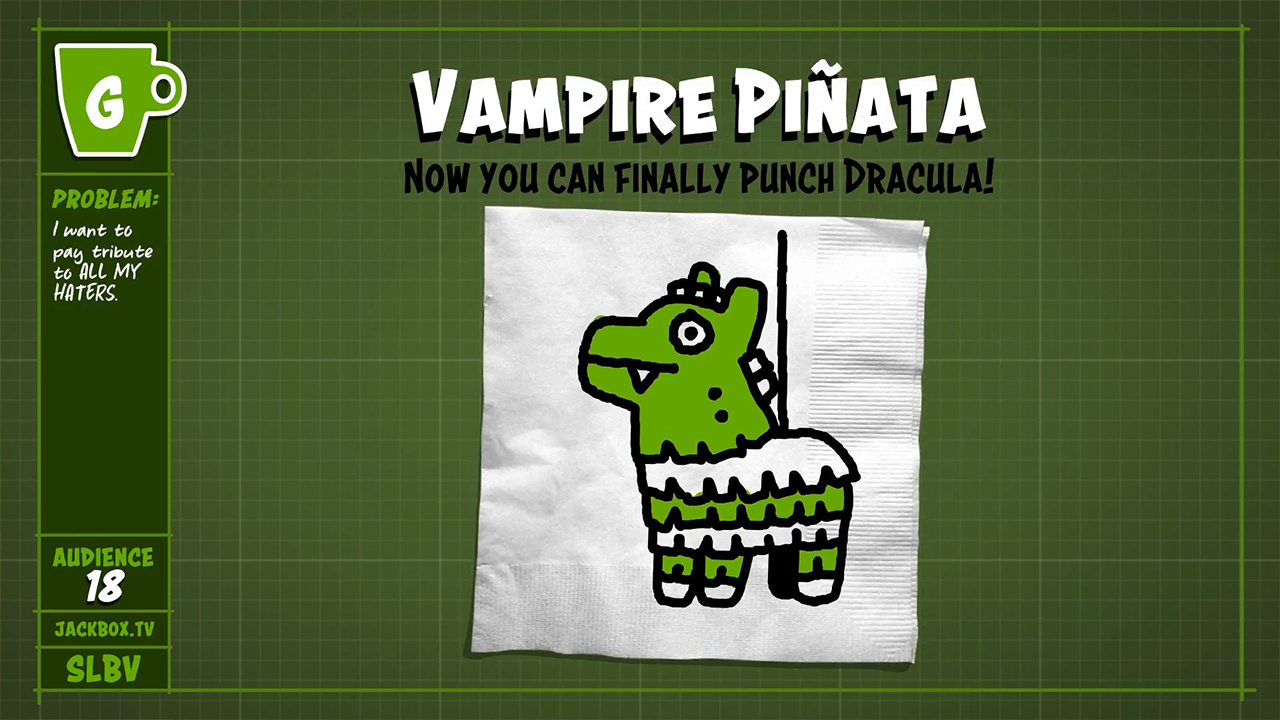 Providing this pack’s mandatory drawing game is Patently Stupid. Faced with a silly problem, players must illustrate an invention designed to satisfy this dire need, complete with a memorable title and snappy slogan. Players even have the option to stand in front of the room and present their product PowerPoint-style, planting the seed for plenty of improvisational comedy gold. Players can “invest” in the best products at the end of each round, and naturally, the most highly funded startup wins the day. 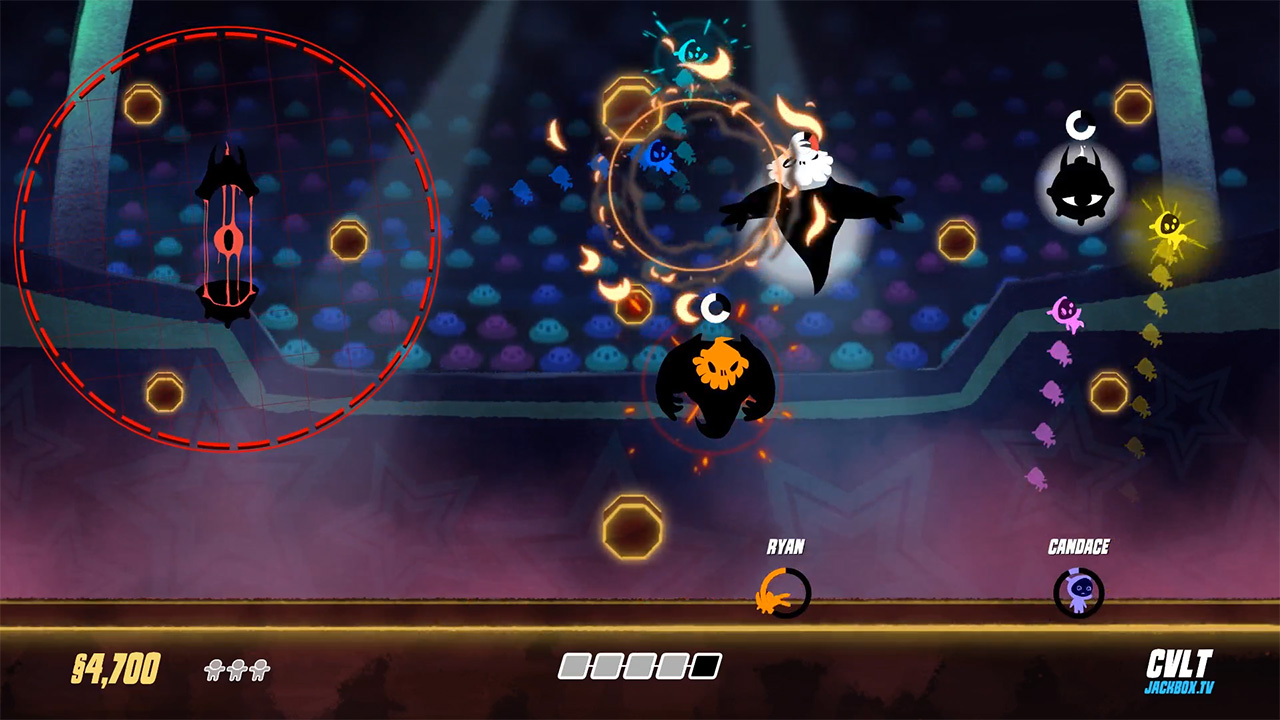 Rounding out the pack is “Zeeple Dome,” the most oddly unique game in any Party Pack so far. Rather than emulating board games or trivia shows, Zeeple Dome is a real-time action game played using your phone as a controller. Players use their phone to launch their character Angry Birds-style around an arena to smash into foes and avoid their attacks. If you have the maximum 6 players on-screen, the action can become downright difficult to follow. Each round introduces new power-ups and elements, often color-coded, that must be dealt with by a particular player. The chaotic action of Zeeple Dome is appealing and fun for a while, but likely won’t hold your attention for long. Using your phone as a controller works better than you’d expect, but it’s still not as responsive as a real controller when it comes to real-time gameplay.

The games here are an interesting bunch. Mad Verse City and You Don’t Know Jack are outstandingly fun, while Patently Stupid and Split the Room are a bit more middle-of-the-road by Jackbox standards. Zeeple Dome… it’s its own thing. Still, with excellent presentation and lots of laughs, The Jackbox Party Pack 5 is well worth picking up if you have friends and family to play with, and is sure to keep the party going at least until next year’s pack comes out.

A code was provided by the publisher for this review.