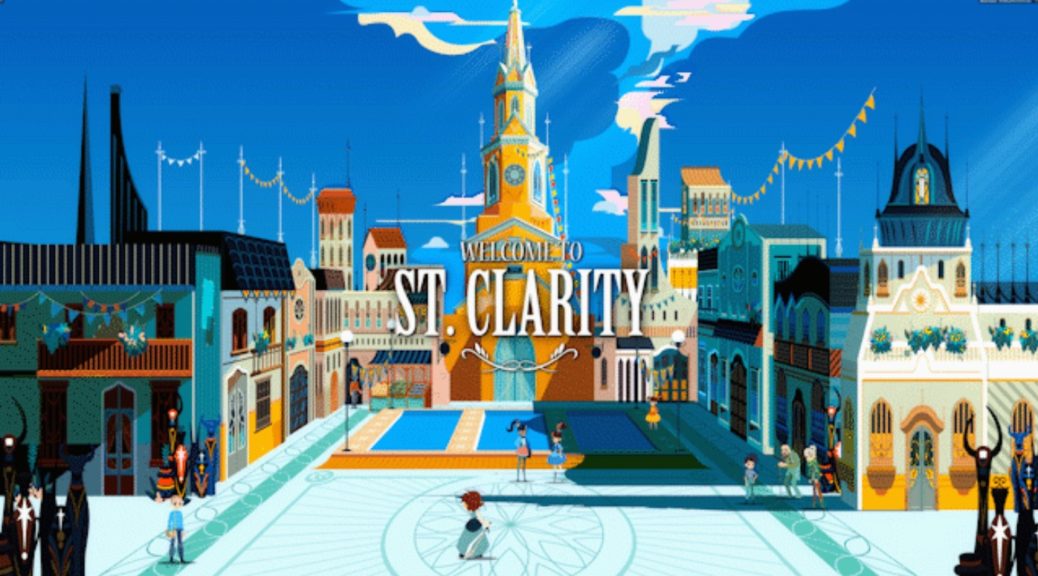 It has been months since we have been introduced by Modus Games on their upcoming charmingly beautiful RPG, Cris Tales.

Previously, a demo for Cris Tales was released via Steam ang GOG. That demo took the players to the quiet town of Narim, where the protagonist met Crisbell and her other team members.

Now, just recently, publisher Modus Games have published a developer blog to give more details about Cris Tales’ setting which is the Cristallis region. This developer blog discussed about a new town called Saint Clarity – place where players will continue their journey and experience a beautiful new area of Cris Tales.

Cris Tales will feature a unique combination of branching stories, innovative combat, and classic RPG progression as well as exciting and unforgettable exploration of how our actions echo through time. The game will launch physically and digitally for the Nintendo Switch in 2020.

Read more about it below:

If you’ve played the demo (available on Steam and GOG) for Cris Tales, then you know that your journey begins in a quiet town called Narim. This is where you’ll meet Crisbell and the first members of her team – her guide, Matias, the mage warrior Cristopher, and old/child-mage Wilhelm. At the conclusion of the demo, our heroes were on their way out of Narim to figure out where the assault on her hometown came from, and we can’t be happier to have more of the game to show now. So, without further ado – Welcome to Saint Clarity.

Saint Clarity is a coastal town where you’ll continue your journey and experience a beautiful new area of Cris Tales. The people of Saint Clarity live in two distinct districts – the lower slums where the workers and common people live out their days doing back-breaking labor, and the inner city where nobles and the elite experience a completely different version of life behind their high wall.

The fashions and architecture of Saint Clarity are inspired by several coastal cities like Cartagena, Barranquilla and many more from the Atlantic Ocean limits in Colombia. You’ll see the bright and flowing apparel that the city is famous for. The characters reflect much of the vibrant colors and unique architecture found in the country, as well as some of the inequality found all over the world in many locations that rely heavily on tourism for their economies. Some of this will be part of the quests and knowledge you’ll obtain in the town.

On your journey in Cris Tales, you’ll meet a number of memorable characters in Saint Clarity including Enzo, the local Mayor, known for his ruthlessness, and the clever and intelligent roboticist Adri, who dreams of a future that will bring prosperity to her fellow neighbors.

The town of Saint Clarity takes cues from Colombian coastal apparel and natural events that happen frequently in Colombia, like the surreal Arroyos – rain-fueled flash floods that can carpet neighborhoods and streets – you’ll have to find high ground to avoid getting carried away! This is just an example of what to expect in the new town!

Just like other areas of Cris Tales, you’ll get to see the past, present, and future of Saint Clarity and influence them based on the decisions you make when you play. We won’t spoil any of those decisions for you, but suffice to say – every version of the future might not be gilded and glistening with gold.

Of course, Cris Tales wouldn’t be much of an RPG if you didn’t have enemies to defeat along with those decisions you’re making, right? Let’s take a quick look at a new skill and enemy!

As you may have experienced at the end of the demo, Willhelm will be the next party member that will join you after Cristopher, and here’s a quick look at his abilities. Wilhelm’s ability set can be used for direct 1vs1 damage, but with careful planning you can sync his abilities with Crisbell’s abilities to have stronger effects.

He’ll have Yukadragoras that he can throw at individual enemies to enact various status effects (or just damage), or that he can plant to enhance their abilities across time – his poison creates an AOE poison effect when allowed to mature and explode in the future, for example. The possibility of mixing abilities with the different characters and how they interact with each other is at the heart of Cris Tales‘ combat system.

Throughout Cris Tales, you’ll acquire new skills as the party levels up, but also as part of quests and plot elements. We’ve still barely scratched the surface of combat, but it just wouldn’t do to give you all too much of a look into the future at this point, would it?