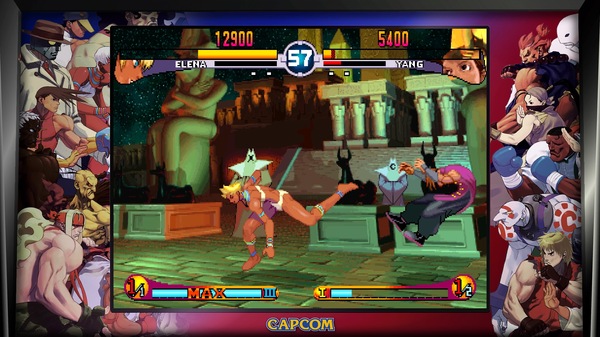 This morning, Capcom Unity revealed new details on how Street Fighter 30th Anniversary Collection’s Versus and Training Modes would work.

More details on both modes can be found below.

Having a dedicated Versus Mode where you can choose your characters and stage is a mainstay for modern fighting games on console. That’s why all 12 of these games will have a local Versus Mode where two players can duke it out against each other! Upon selecting which game you’d like to play Versus in, you’ll then be given a choice of which stage to play on. To add some extra flavor, each of these stages is labeled with which character originated from it. For example, in Street Fighter Alpha 3, the House of Mystery – Palazzo Mistero, Italy is labeled as Rose’s stage.

After each match, you’ll have the option to rematch, as well. If you choose to not have a rematch, you’ll be taken back to the main Versus screen where you can choose which of the 12 games to play. Invite your friends over to see who can really go home with the bragging rights!

As previously announced, Street Fighter II: Hyper Fighting, Super Street Fighter II: Turbo, Street Fighter Alpha 3, and Street Fighter III: 3rd Strike will all have online play! We’re happy to announce that all four of these iconic titles will also feature robust Training Modes, where you can practice combos, set ups, and master your character of choice in order to hone your skills for countless online battles. There are numerous training options available that weren’t in the arcade versions of these games that will enable you to customize your experience and train more efficiently than ever before! Some of the options that are universal amongst all four games are the ability to turn on damage display, input display, dummy controls, and more!

These aren’t even all the options available! Each of the four games also has its own additional training options that work within the gameplay mechanics introduced in the respective series.

After the initial announcement, we saw lots of fan feedback hoping for Versus and Training Modes, even if the collection is focused on the arcade versions. It’s because of this feedback that these modes have been added to the game. Since this is a brand new feature, Versus and Training Mode will be available as a day one patch on May 29. You must connect to the internet and download the patch in order to enable them.

We hope Training Mode will allow you to brush up on your fighting prowess before heading online to take on the world!

TITLES AVAILABLE IN THE COLLECTION