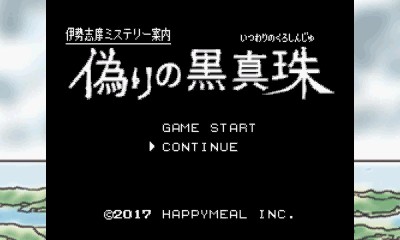 Happymeal announced this alongside publisher Flyhigh Works during the Flyhigh Express End-of-Year Special 2018.

The official website lists the following description for the game:

In Tokyo’s Ueno Park, a body that died of unnatural causes was discovered. The victim was a drifter that wandered the park. The player / protagonist (a detective) and junior detective Ken Kaimeiji discover a purse that reads “浜〇真珠” (the 〇 was chipped away and unreadable) at the scene. It turned out that the purse was made in the Ise region, as revealed by a smartphone search for “浜〇真珠.” And so the protagonist and Ken immediately left for Ise Shima…

Not only does the game emphasize the textures of the Famciom era, it is also built entirely based on the system’s specifications. Players will use commands to discover the truth of the case. Also, players can switch between dot-by-dot pixel and magnified graphics.

Here is the trailer for the 3DS version of the game.