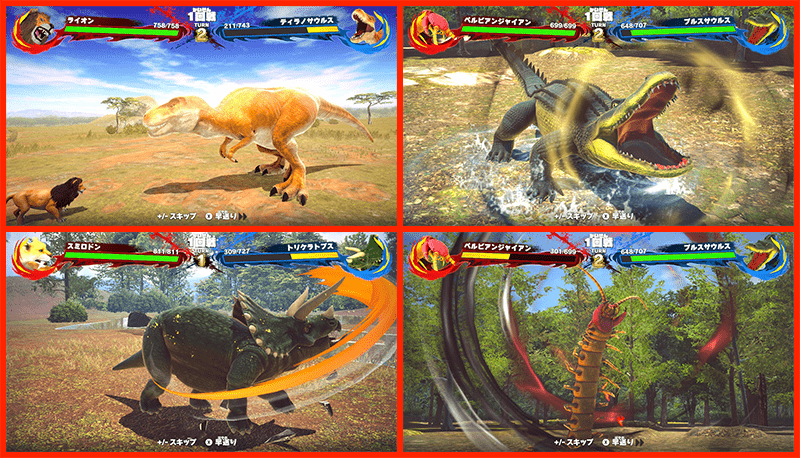 Based on a popular picture book series, Ishu Saikyou Ou Zukan: Battle Colosseum is a game where players can raise and battle various animals, prehistoric creatures, and mythical monsters, and others to determine which is the strongest of them all. The overall concept appears to be similar to Monster Rancher, although perhaps a bit more limited in scope. The game is set to launch on December 15th 2022 for Switch in Japan.

Check out more screenshots and details below (translated via Gematsu):

■ About the Saikyou Ou Zukan Series

Saikyou Ou Zukan is a simulation picture book series created with the concept of “who would be the strongest if all of the creatures in the animal kingdom, world of dinosaurs, and so on battled it out in a tournament?” So far, battles have unfolded in the realms of “animals,” “extinct creatures,” “dinosaurs,” “yokai,” “bugs,” “monsters,” and even “underwater” to determine the number one creature. The battles have extended to even “myths” and “dragons,” and the latest book Eiyuu Saikyou Ou Zukan has been a massive hit since its release! The momentum never ends!

Become a Researcher and Train the Strongest Creatures

“Lion vs. Tyrannosaurus,” “Asian Giant Hornet vs. African Elephant,” and so on are just some of the unimaginable battles that you will only be able to experience in Ishu Saikyou Ou Zukan: Battle Colosseum.

When the creatures you trained participate in battle tournaments, an intense battle scene will unfold. Your eyes will be glued to the heated scenes of fighting and defending as they battle it out for victory.

24 Different Species! Including Biological Data for Each Creature

A mass gathering of 24 species, including bugs, animals, extinct creatures, and even dinosaurs. The game also features real biological data for each creature, so you can learn about them in detail while playing.