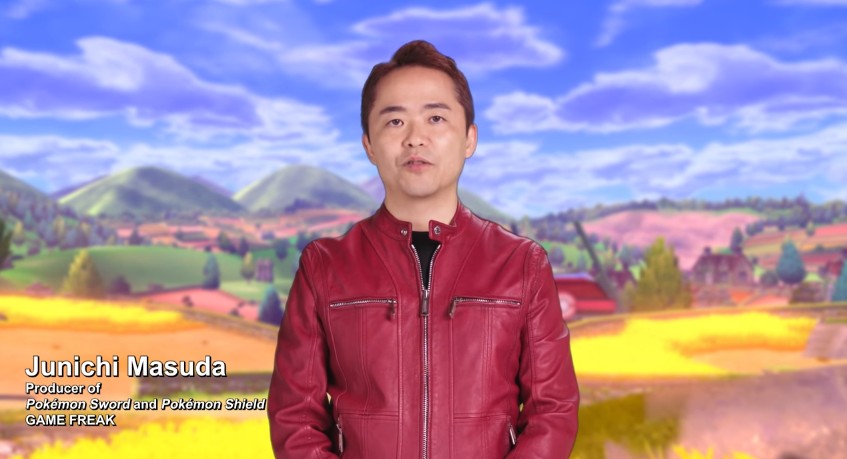 As we approach the launch of Pokemon Sword and Shield, the Japanese Pokemon community has started slamming Junichi Masuda, the producer for the games, for making a “heartless” tweet that is related to the cutting of Pokemon.

It all started when Twitter user @Hathuurui tweeted to Masuda photos of her Bayleef and Bayleef nails. She showed Masuda her Bayleef nails and told him she’s “looking forward to the launch of Pokemon Sword and Shield with my dear Bayleef”.

Junichi Masuda retweeted her post with the word “thanks!!!”:

While it may seem like an innocent reply, what @Hathuurui probably didn’t know was Bayleef and its entire evolutionary family have been cut from Pokemon Sword and Shield, meaning there’s no way to transfer Bayleef into the games. Thus, Japanese fans called Masuda’s response to @Hathuurui “very heartless”, as it could have raised @Hathuurui’s hopes that Bayleef made it into Sword and Shield.

Here’s what the Japanese players have to say, as compiled and translated by Redditor REDChReNiC: 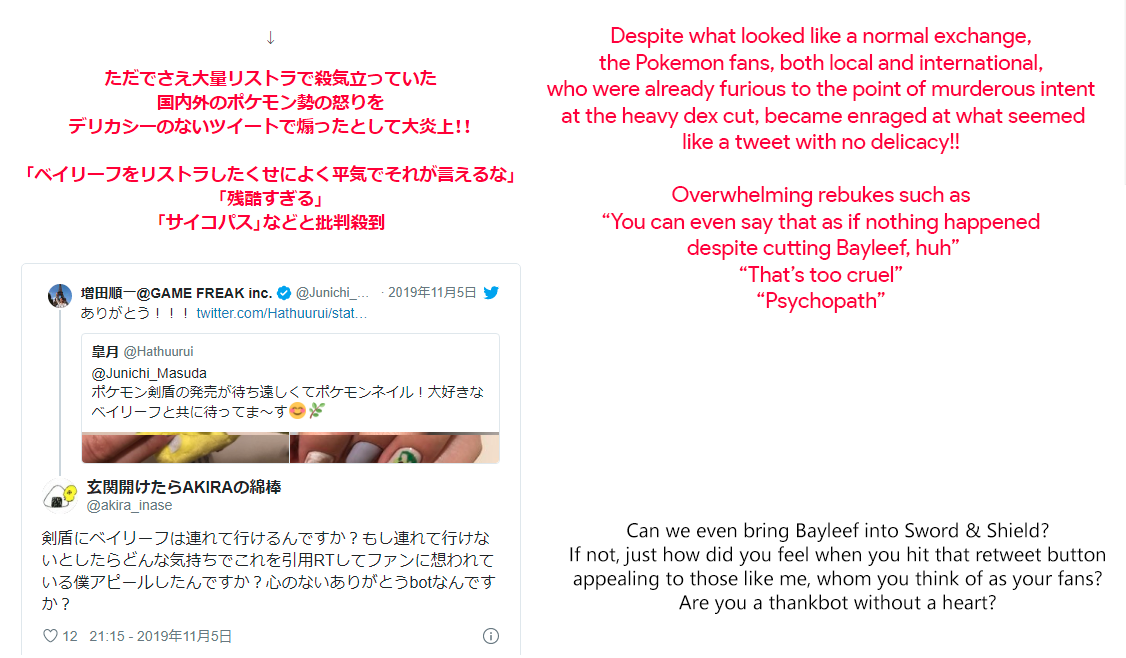 “You can even say that as if nothing happened despite cutting Bayleef, huh”

“Can we even bring Bayleef into Sword & Shield? If not, just how did you feel when you hit that retweet button appealing to those like me, whom you think of as your fans? Are you a thankbot without a heart?” 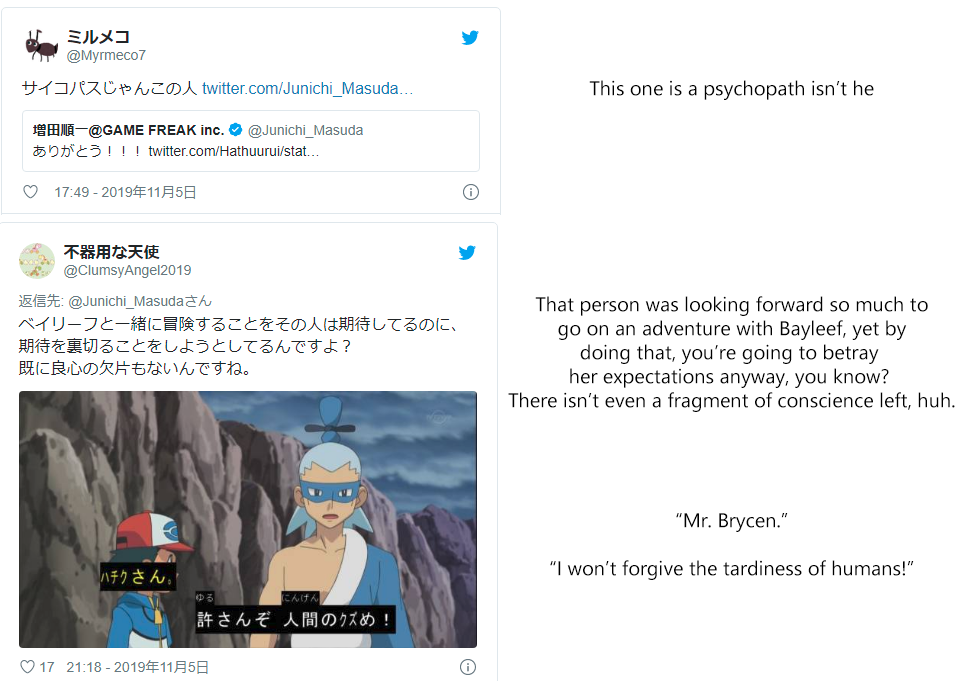 “This one is a psychopath isn’t he”

“That person was looking forward so much to go on an adventure with Bayleef, yet by doing that, you’re going to betray her expectations anyway, you know? There isn’t even a fragment of conscience left, huh.” 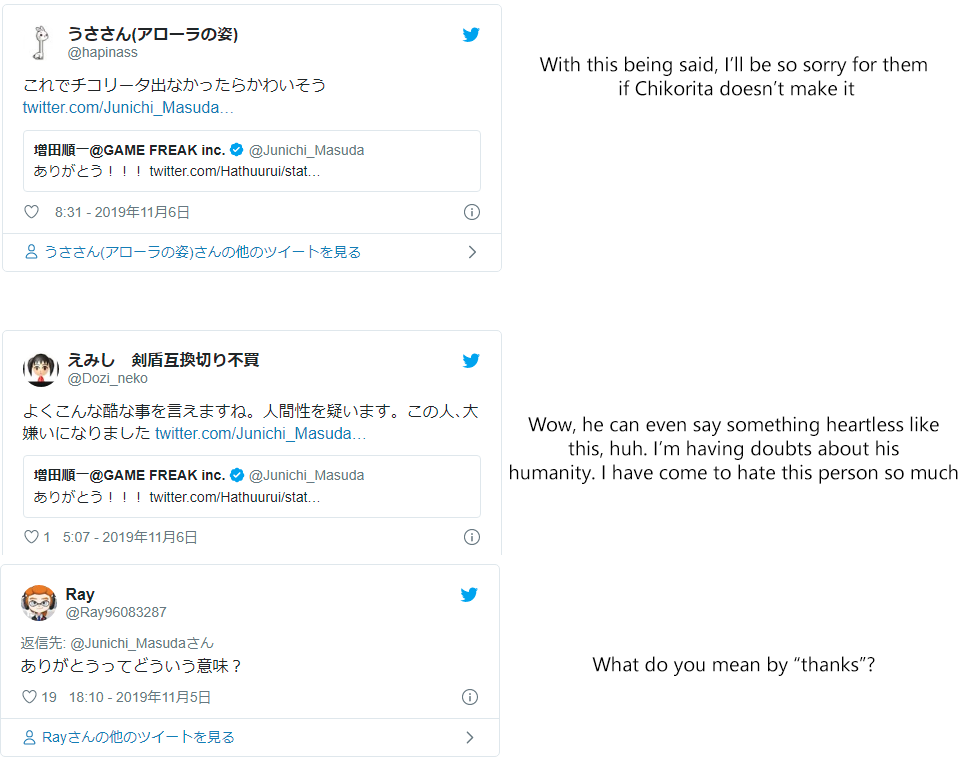 “With this being said, I’ll be so sorry for them if Chikorita doesn’t make it”

“Wow, he can even say something heartless like this, huh. I’m having doubts about his humanity. I have come to hate this person so much”

It seems that some players are still unaware of the cuts, which shouldn’t be surprising as The Pokemon Company has refused to make an official statement about it in Japan until now.

“Is this ‘confirmed list’ actually true? If that’s the truth, how about announcing it earlier? I bought both a Switch and the double pack just because these are new games. I saw the commercials and got excited and bought them, but this is really disappointing. The tall grass, the curry… those can be whatever, I don’t care. Just doing your regular work would have been good enough.”

“I’m so sad because too many Pokemon were cut… Why… Every Pokemon is loved by someone. It’s not even a stretch to say that their existence is vital to human lives. :'( I wanted to support the Pokemon series forever, but… this is something I have never though of even in my dreams.” 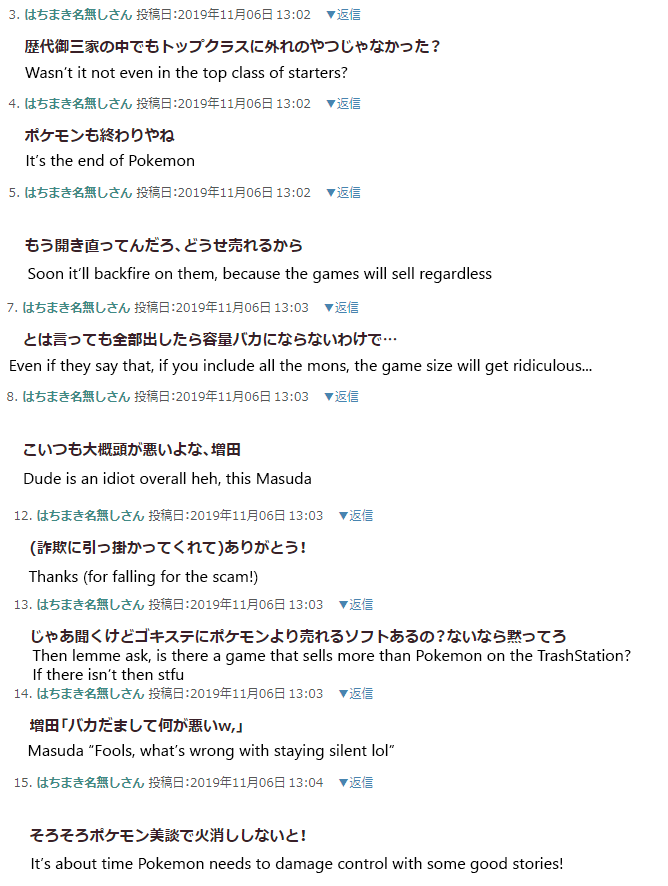 “Wasn’t it not even in the top class of starters?”

“It’s the end of Pokemon”

“Soon it’ll backfire on them, because the games will sell regardless”

“Even if they said that, if you include all the mons, the game size will get ridiculous…”

“Dude is an idiot overall heh, this Masuda”

“Thanks (for falling for the scam!)”

“Then lemme ask, is there a game that sells more than Pokemon on the TrashStation? If there isn’t then stfu”

“It’s about time Pokemon needs to damage control with some good stories!” 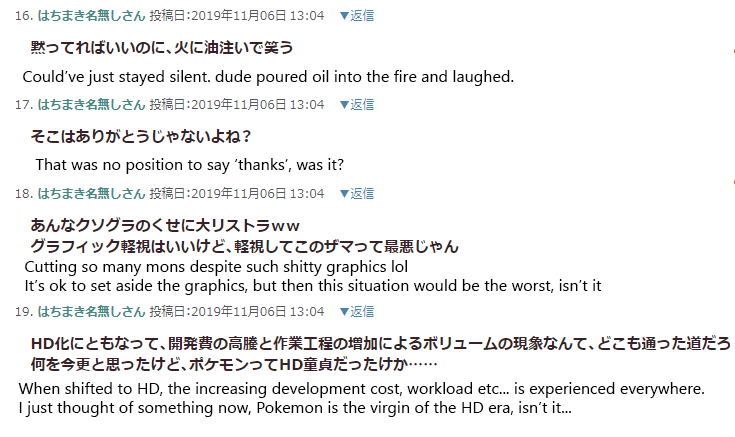 “That was no position to say ‘thanks’, was it?”

“Cutting so many mons despite such shitty graphics lol. It’s ok to set aside the graphics, but then this situation would be the worst, isn’t it”

“When shifted to HD, the increasing development cost, workload etc… is experienced everywhere. I just thought of something now, Pokemon is the virgin of the HD era, isn’t it…”