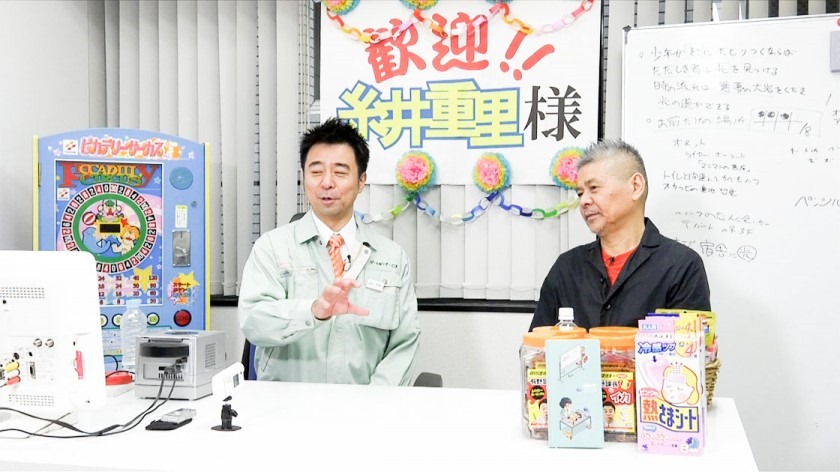 Earlier this year, Mother creator Shigesato Itoi appeared on the Japanese variety show GameCenterCX, where he was interviewed about his work on the Mother series in celebration of its 30th Anniversary.

The interview has since received an English translation online, revealing some interesting details about Mother’s history. Among the topics discussed by Itoi include how he was inspired to create the game, as well as the first time he pitched the idea to Nintendo:

Arino Kacho: “Had you made any other games before Mother?”

Shigesato Itoi: “You’re playing Mother 2 for the Super Famicom, but Mother for the Famicom was the first game I ever made.”

Arino Kacho: “Did you go to Nintendo and tell them you want to make a game?”

Arino Kacho: “I see. So out of all the game companies, why Nintendo?”

Itoi: “I owe a lot to Mario. I have asthma, and I start coughing when I lay down. I’ve always had a hard time sleeping, and for a while I had to sit up at all times or else I just couldn’t stop coughing. The only things I could really do while sitting up at night were read a book or play a game. So I’d wake up and grab a controller, and Mario would see me through my asthma at night.”

Arino Kacho: “And you can’t call on anyone in the middle of the night, so it was you and Mario. Did that make you want to work with Nintendo?”

Itoi: “It’s more like I felt indebted to Nintendo.”

Arino Kacho: “But feeling indebted to Nintendo doesn’t equate to “I want to make a game,” right?”

Itoi: “Well, one day I finally started playing a copy of Dragon Quest that someone had given me. It’d been sitting around for a while, but it was raining and I had nothing better to do.”

Arino Kacho: “What an awful way to put it. (Laughs)”

Itoi: “That’s how I felt about it before ever playing it. I started it with pretty low expectations, and before I knew it, I was having a great time.”

Arino Kacho: “Was that the original Dragon Quest?”

Itoi: “Yeah. I diligently made my way through it until I beat the game, and then I saw why everyone liked it so much. By then Dragon Quest 2 was already out and there was a copy at the office. I drove straight to work to grab it, rushed home, and huffed my way over to the TV to throw the cartridge into the console and queue it up.”

Itoi: “It was fun. At first I was simply enjoying the game, but then it occurred to me that there’s someone out there who’s entertaining me through this game.”

Itoi: “Yeah, it’s like laughing at a comedian’s joke and realizing, “Hey, that person on stage is the one making me laugh!” After a while I found myself thinking about what kind of things I’d do if I made the same sort of game. I wondered why all the role-playing games that were popular at the time had swords and magic.”

Itoi: “Games were more unpopular back then. I was defending them on TV, saying something like, “Manga used to be taboo — you’d be scorned for having manga as a college student. Video games are in the same position today, and although it sounds a little extreme, I think games will eventually be an even bigger part of our culture than manga.””

Arino Kacho: “So the President of Nintendo spotted you saying that on TV.”

Itoi: “Yeah. People at Nintendo wondered who I was after that, and Yamauchi said he wanted to meet me. They invited me to their office to ask me what I thought of a game, and after that, we chatted for a while. That’s when (Shigeru) Miyamoto came in.”

Arino Kacho: “The creator of Mario! Was that the first time you two met?”

Arino Kacho: “Were you excited to meet the man who made Mario?”

Itoi: “Yeah, I was so happy. We ended up becoming really close — we got along quite well from the start. I told him I actually had an idea of my own, and pulled out some copies of the notes I’d taken, asking him if he thought it would work as a game.”

Arino Kacho: “So you suggested making an RPG that starred a kid and didn’t have swords in it.”

Itoi: “I pictured them jumping up from their chairs, saying, “Wow, what an idea! We must try it!” It was a dream of mine that they’d make a game using that idea, but instead the conversation just kind of stopped at Miyamoto asking me how serious I was about it. He said, “Itoi, how involved do you plan on being in it? Being totally involved in a project can be very demanding.” He sounded very solemn.”

Arino Kacho: “So the mood changed a little.”

Arino Kacho: “You didn’t even know anything about the industry yet. You were still at the stage of making vague suggestions.”

Itoi: “I was also surprised that no one was remotely surprised by any of the ideas I presented.”

Arino Kacho: “You were probably thinking, “Isn’t this innovative?” while Miyamoto was thinking, “How ready is he?””

Arino Kacho: “So what happened after that? Did you tell him you’d keep your hands off?”

If you’re interested in finding out where the story went from here, you can read the full interview here.