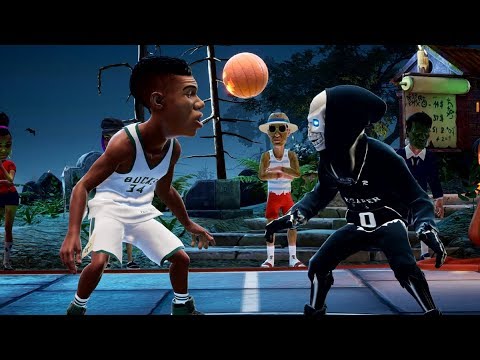 Players who have bought NBA 2K Playgrounds 2 should head on to the Nintendo eShop and update their game as a new Halloween themed DLC is now available for the game. Players will be able to get a variety of Halloween-themed outfits, a new lottery pick, and Kareem Abdul Jabbar as an unlockable player.

You can check out the trailer for the DLC below:

This new update, available today on PlayStation®4, Xbox One and PC, and on Switch at a later date, introduces an exciting Halloween playground, an assortment of Halloween-themed outfits (available via Swag Pack unlocks), a new lottery pick called the Ankle Breaker, and one truly frightful sight for your opponents: the addition of all-time great Kareem Abdul-Jabbar to NBA 2K Playgrounds 2’s roster of unlockable players. A new trailer released today shows off all the fun surprises players can expect.

Today’s free update also features a number of improvements and balance changes cultivated from player feedback post-release, including refinements for character speed, blocking rates, and three-pointer percentages, as well as a variety of minor technical fixes to address issues with lag, AI and the shot meter.

NBA 2K Playgrounds 2 is rated E (Everyone) by the ESRB.