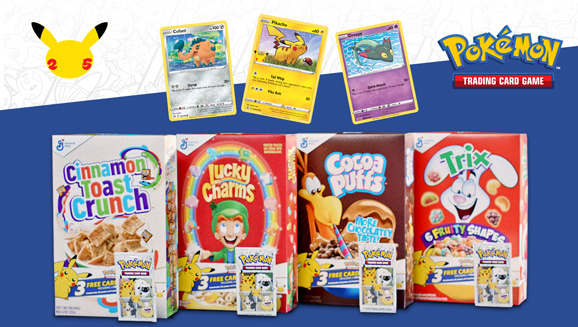 Last month, The Pokemon Company started a collaboration with General Mills to package some exclusive Pokemon Trading Card Booster packs in select brands of cereal for a limited time.

Much like the previous Mcdonald’s tie-in, these boxes of cereal have become the new target of Pokemon TCG collectors and scalpers eager to get their hands on these lucrative cards. Not only have there been reports of people buying up entire pallets worth of cereal to farm for cards, but some have even taken to ripping open the boxes inside stores, palming the cards but leaving the cereal intact.

The wealthy family in my hometown owns a card store and last week i went to their rummage sale. There were literally pallets and pallets of years old cereal boxes that came with free pokemon cards originally, but there was a sign that said all the card packs had been taken out pic.twitter.com/zOdrN6YM6d

Due to the latter, some stores have apparently started adding extra security packaging to their cereal boxes, they kind normally reserved for much more expensive and valuable items:

We’ve actually got to this stage? ??‍♂️ #Pokemon #PokemonTCG pic.twitter.com/DhPikSHA4t

Naturally, the cards have already begun to appear on auction sites such as ebay at absurd asking prices. At the time of this writing, it remains to be seen if The Pokemon Company or General Mills will be taking any further steps to mitigate this issue, as Mcdonald‘s did when it was facing similar problems with its Happy Meal tie-in.