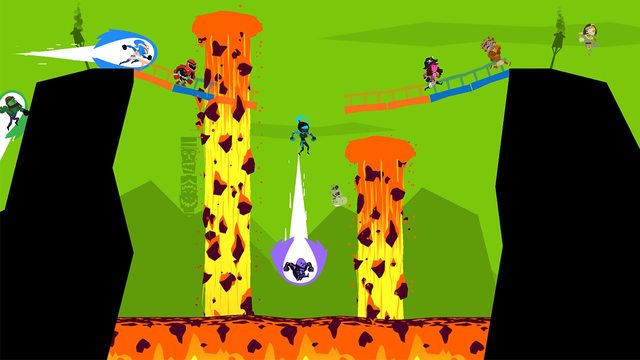 In addition, a new gameplay trailer has been posted and you can find the studio’s explanation for the delay below.

Alex Rushdy here, CEO and Creative Director at 13AM Games. I’m so glad that we can finally announce the release date for Runbow Pocket. It’s been a long time coming. It was almost exactly one year ago that I got up on stream at E3 with Geoff Keighley and Damon Baker and announced Runbow Deluxe and Runbow Pocket Deluxe. We’ve been receiving requests for a release date for Runbow Pocket almost every day since then, and we at 13AM Games are truly apologetic and sympathetic for the long delay in getting this game into your hands. We don’t like delaying games!

Runbow Pocket will be released June 20th in North America and Europe!

As part of our company culture, we don’t like keeping our fans in the dark as to why a game has been delayed or changed in some way since reveal, so I’d like to answer some of the questions that you guys might have about the game. It was a very difficult process to squeeze a large Wii U game into the New 3DS, especially when the engine it is built in is not our own. Being a pilot project for Unity New 3DS meant we had to face a cavalcade of technical difficulties, creating a new networking system, creating an e-commerce plug-in, figuring out how to maximize performance with significantly smaller CPU, GPU and memory compared to Wii U, and reorganizing all the UI and UX to work on the lower resolution dual screens.

Runbow Pocket has a built-in DLC shop. You can pick and choose the DLC add-on content however you like. We discussed including all DLC at a higher price download, but we wanted to give players the option to purchase only the DLC that they want, to keep cost down, while still allowing us to keep the same price structure as on Wii U. The Deluxe edition of Pocket from NightHawk includes not only all the DLC and a pretty retail box and cart, it also includes all four of the Nintendo 3DS HOME menu themes. So as a player you’ve got a choice to piece-meal the game on eShop or get it all in one big package at retail! The retail release is North America-only, however, but the game is coming to Europe as a download, of course.

The reason this stuff took so long was due to no one doing it before us. Luckily we had the support of Unity behind us, specifically Unity Games Japan, who assisted greatly in QA, tool development and overall engine support. We also had extensive support from Nintendo of America, especially Software Development Support Group. We are glad to have worked with the team behind the Unity engine and Nintendo of America to take on this ambitious project of bringing a native Unity game from Wii U to New Nintendo 3DS (and New 2DS XL!), something that was deemed impossible only a scant few years ago!

We especially wanted to make sure performance was strong across the game’s many, many single player levels. Given the portable nature of the game, most people will be playing by themselves on a commute or out in the world, so we made sure the game’s single player content runs at a smooth framerate (no small feat!). Being at the forefront of something means a lot of mistakes will be made and bugs will be found. So we missed our initial launch date estimates of late 2016 / early 2017 by a pretty wide margin. We also had to cut features such as StreetPass and local adhoc play in order to prioritize game performance and WiFi network play (up to 4 players), and finally get the game out. Certain engine features just weren’t ready early enough for us to complete the game feature associated with them. For this, we apologize deeply to our fans who were looking forward to these specific features.

But! We greatly appreciate all the love and support we have received from our fans over the years, and we want to do whatever we can to show we care. So, here’s what we’ve got planned: To thank all of our awesome fans, we’re running two cool campaigns across social media in the weeks following Runbow Pocket’s launch. The first is the Runbow Poster Fan Campaign! During the weeks after Runbow Pocket’s launch, we will be opening polls for fans to vote in, choosing favourite Runbow characters, colors, costumes and stages. Once voting is over, our art director Takashi (@13am_takashi) will produce a brand new print-ready piece of art based on the poll results that anyone can download for free and use as a wallpaper or even print off and hang on their wall!

The second is the Show Your Runbow Fan Campaign – after Runbow Pocket’s launch, anyone who send us a picture will be entered into a contest to win cool prizes! What kind of picture, you ask? It could be a photo of you with a copy of Runbow, wearing a Runbow shirt, playing Runbow, a piece of Runbow fan art, or just doing something Runbow-related (eating a rainbow-colored cake, maybe?). 6 winners will be randomly drawn to win eShop cards and other prizes, and everyone who entered will get their picture turned into a collage that will be hung at 13AM Games headquarters in Toronto! It is the ultimate way to become a part of Runbow history!

Also coming soon, I’m happy to announce the Runbow Vinyl Soundtrack double LP will be arriving in people’s hands starting on 6/20! Discs are pressed and will be sent out to those who pre-ordered! You can also order a disc for yourself from iam8bit’s website. It features a stylish new cover from Mario Graciotti and both volume 1 and 2 soundtracks from Runbow and Runbow: Satura’s Space Adventure!

And I’ve got one last announcement for 13AM Games fans everywhere: The team here at 13AM Games are hard at work on their next project… A brand new IP for a totally new game coming to Nintendo Switch! We can’t share many details yet, but we can assure you that it’s quite a different game from Runbow, but still distinctly “13AM.” It’s an action game, it’s single player, and it’s a bit… weird. Good weird, though. We look forward to sharing more details with you soon!