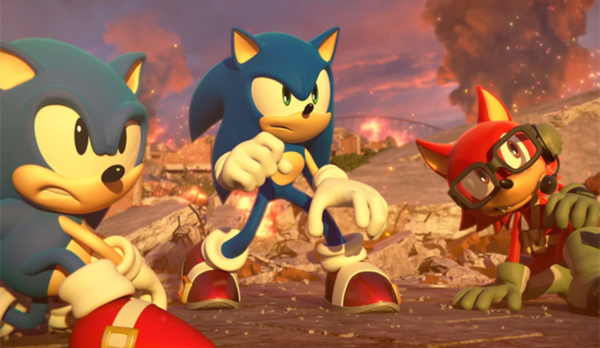 SEGA and Atlus will be bringing live demos of three highly anticipated titles to GameStop Expo 2017.

From SEGA, Visitors will be able to try out Sonic Forces, a brand new 3D Sonic adventure coming to Nintendo Switch. From Atlus, visitors will have the chance to play Etrian Odyssey V and Radiant Historia: Perfect Chronology.

SEGA and ATLUS are returning to GameStop EXPO 2017 at the Sands Expo (Booth #1213) with one of the best line-ups yet. Attendees will be treated to demos of Yakuza 6 and Yakuza Kiwami, alongside two highly anticipated titles featuring everyone’s favorite speedy hedgehog in Sonic Mania and Sonic Forces. 3DS owners can look forward to checking out live demos of Radiant Historia: Perfect Chronology and Etrian Odyssey V: Beyond the Myth. They’ll also be able to walk through Kamurocho gate from the Yakuza series and snap a photo alongside a mech from 13 Sentinels.
Of course, it wouldn’t be GameStop EXPO without some fun, free giveaways! Attendees will be able to grab oversized Yakuza bags, stickers with characters from Etrian Odyssey V: Beyond the Myth, Radiant Historia: Perfect Chronology and Shin Megami Tensei: Strange Journey Redux, art prints from 13 Sentinels and more (while supplies last).
Sands Expo, Booth #1213
Yakuza 6: The Song of Life and Yakuza Kiwami
Visitors will be able to reacquaint themselves with the legendary Kazuma Kiryu in a double header of hard-hitting Yakuza™ action, playable on the show floor: Yakuza 6: The Song of Life (early 2018), the latest entry in the long-running series, and Yakuza Kiwami (releasing August 29 for $29.99), a rebuilt-from-scratch HD remake of the original 2005 PlayStation 2 hit, Yakuza. Attendees who visit the booth will also have the opportunity to receive special Yakuza-themed swag (as long as supplies last).
Sonic Mania and Sonic Forces
If breakneck speed is more your thing, we’ve got you covered! The SEGA-ATLUS booth will feature playable stations for the ultimate celebration of past and future with Sonic Mania™, an all-new 2D adventure with stunning HD retro style graphics running at smooth 60FPS and featuring all your favorite classic characters, available now for $19.99 on Nintendo Switch, PlayStation 4, and Xbox One. The PC version of the game will come out on Aug. 29.
Sonic Forces™, from the development team behind Sonic Colors™ and Sonic Generations™, will be your second dose of speedy Sonic action where you will get to experience fast-paced gameplay as Modern Sonic, thrilling platforming as Classic Sonic, and powerful gadget action as your own custom Hero Character!
Two Highly Anticipated Nintendo 3DS Titles