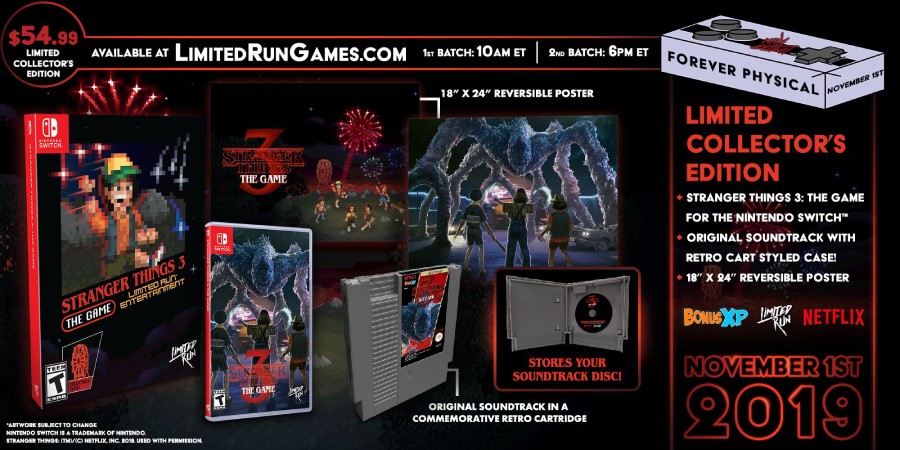 Looking to add some spooky Switch titles to your collection? Limited Run Games will be filling that niche with their next physical release!

The publisher has revealed that Stranger Things 3: The Game will be next in line for a limited print-run! Open pre-orders based on demand will commence from 1 November 2019 (10 am ET).

We're excited to announce that Stranger Things 3: The Game will be getting a Limited Run for the PlayStation 4 and Nintendo Switch. Standard copies will be available for a five-week open pre-order beginning at 10am ET on November 1. pic.twitter.com/xPYCKz25Uv

In addition to this, LRG revealed a Collector’s Edition bundle for the game which will open for pre-orders at the same time. The $54.99 USD bundle will contain the game, a poster, the game’s soundtrack in a mock NES cartridge case, and a retro-style outer box! Only 2,500 copies will be available, so fans of the series may want to stay alert.

Make sure you grab a limited Collector's Edition of Stranger Things 3: The Game from limitedrungames. com this Friday, Nov 1 at 10am & 6pm ET. Each CE comes with the game, a soundtrack in a case styled after your favorite console, and a poster! pic.twitter.com/TMaoTcEdCP

You will be able to grab a standard copy over here. Meanwhile, the Collector’s Edition bundle will go up for grabs over here.