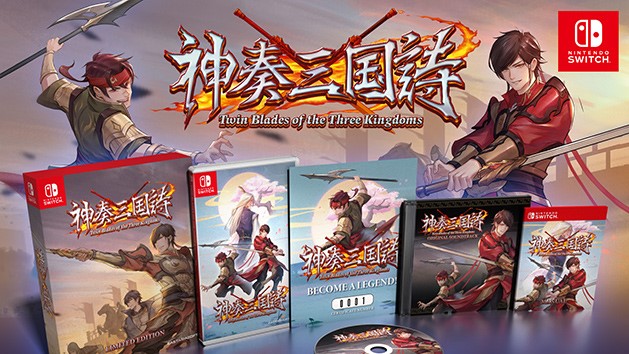 Hoping to add the horror thriller adventure Twin Blades of the Three Kingdoms to your Switch collection? Well, you’ll get your chance very soon!

Eastasiasoft has confirmed that they will be releasing physical copies of the retro-style RPG for Nintendo Switch. Standard editions will be available along with 2,000 Limited Edition bundles – the latter of which will contain the following:

You’ll be able to pre-order the standard edition here and the Limited Edition here, when pre-orders open on 27 October 2022 (11 am ET). Check out the trailer with more details below:

Today we are proud to announce that retro RPG Twin Blades of the Three Kingdoms will receive physical release for Nintendo Switch, with pre-orders starting later this week.

Inspired by classical novel Romance of the Three Kingdoms, this new RPG combines Chinese history and mythology presented in old-school pixel art style. Players will be able to recruit more than 120 generals in their army and rewrite legend in a “what if…” scenario spanning an epic single-player narrative adventure, all set to an original soundtrack by renowned composer BUNBUN, known for his work on Capcom classics like Mega Man 3, Breath of Fire, Final Fight 2 and more.

Twin Blades of the Three Kingdoms is originally developed by independent Japanese studio UNICO and will be published in physical release by Eastasiasoft Limited. Pre-orders open with online retail partner Playasia at 11pm Hong Kong time (11am ET / 4pm UK) this Thursday, October 27th. Only 2000 Limited Editions will be produced and include the game, manual, soundtrack CD and numbered certificate in a collector’s box at US$39.99 plus shipping. Standard copies will also be available as an open pre-order at US$29.99 each. Shipping is expected to begin in January 2023.