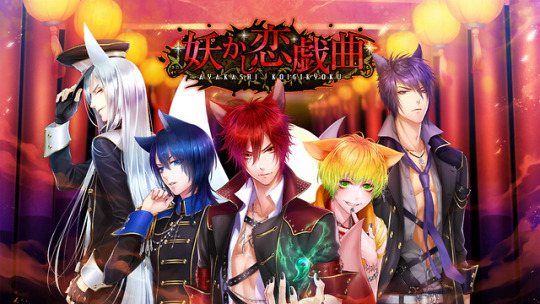 OperaHouse’s visual novel about dating fox ear guys is coming to the Japanese Nintendo Switch eShop next week, 26 April 2018. The game will be in Japanese, but nothing is going to come between you and fox-eared band members.

On a night when the stars and moon are sparkling――
The protagonist is visiting a club where a low vibration is rhythmically reverberating everywhere.
The band that’s playing tonight is a unique five member visual kei band where all the members have fox ears called “Fox Ear”.
When she hears their song the Magatama that she received a long time ago starts to give off a light.
Losing consciousness because of the light the protagonist is carried backstage to the Fox Ear dressing room.
They urge her to hand over the Magatama, but as if it’s protecting her it starts to give off a light again…
Realizing that stealing it is impossible the five of them surrender to the protagonist who holds the Magatama――