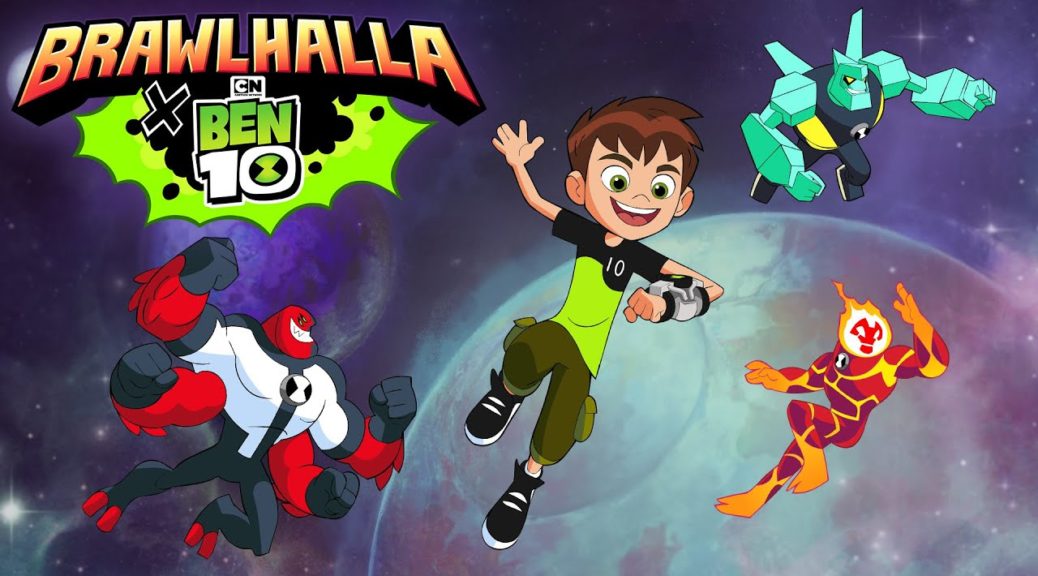 The cast of Brawlhalla have been joined by yet another crossover character in the game’s latest update.

This time, Ben 10 from the popular cartoon series of the same name will be joining the cast, specifically his alien forms Fourarms, Heatblast, and Diamondhead. The event also includes a new “Morph” game mode, as well as a number of other permanent features as part of the title’s Version 4.02 update.

Check out a trailer below, along with the full details:

Cartoon Network’s Ben 10 arrives in his alien forms Heatblast, Diamondhead, and Four Arms to battle in Brawlhalla! This Ben 10 Epic Crossover event features three new Epic Crossovers featuring custom Signature effects, Weapon Skins, and more. Vilgax also makes an appearance as a new KO Effect! The event also includes a new Morph game mode, a new Free-for-All and 1v1 Map, and a slew of other features that will be staying in Brawlhalla permanently after the event ends.
In addition, Xull has received an update to his base design. We’ve also made game improvements, bug fixes, and more.

In Brawlhalla, Heatblast, Diamondhead, and Four Arms mirror the abilities of Ada, Caspian, and Kor, respectively, and will be staying in Mallhalla after the event ends. Ben 10, Cartoon Network, the logos, and all related characters and elements are trademarks of and © Cartoon Network, a WarnerMedia company. All Rights Reserved.

Heatblast Epic Crossover – “Bringing the heat!”
– Heatblast will scorch his opponents with his Blazing Fire.

Diamondhead Epic Crossover – “You haven’t even scratched the surface.”
– With crystal shards and spiked balls, Diamondhead cuts through the competition!

Four Arms Epic Crossover – “Four armed and ready for battle!”
– Using the environment to crush his enemies, Four Arms brings his Concrete Slam into the tournament.

Vilgax
– “The conqueror of worlds will destroy you.”
– This KO features Vilgax rising from the depths to fire laser beams at your opponents before bringing them down with his tentacle arms.

Omnitrix
– “It’s hero time!”
– Let your Legends stand upon the Omnitrix itself. Features a green glow during selection, and for the first time, sound effects upon confirmation!

It’s hero time in this 1v1, 3 stock transforming battle! Choose one weapon each from 3 of your favorite Legends in character select. Activate your powers like the Omnitrix with the throw button to change forms. Weapons are always equipped and cannot be picked up or thrown. First to 3 KOs wins!

– New Morph Game Mode
– 1v1, 3 Stocks
– Choose one weapon each from 3 Legends.
– Morph into the different Legends with the throw button.
– First to 3 KOs wins!

Updated Xull Base Design
Xull’s base design has received an update to better fit his proportions compared to more recent Legends. This update also features a few added details to his base design, like his shoulder pauldron, while better showing his brute strength physique. Xull’s Skins have also received minor updates to better match his new proportions.

– We’re rapidly rotating through chests. See the in-game timer to know when the next chest will rotate.
– Check out the new Sales items!

User Interface
– When changing servers, the region icons have been updated in the UI to better geographical location. US-East is now Ohio and Europe has been moved to Frankfurt.

Sound
– While in “practice” mode searching for a matchmaking game, the music from the Legend Select Screen will continue playing until a match is found.

– Lucien – This mysterious highwayman is always scheming for gold, and now has come to Valhalla to take part in the tournament wielding Katars and Blasters!
– Vector – Transforming into a jet with his Rocket Lance and wielding his Bow to fight, Vector travels through time and space to battle crime!
– Koji – Armed with his ancestral katana, Koji slices his way through the battlefield with Sword and Bow!
– Thor – Finally entering the ring, Thor, God of Thunder, makes his appearance in the Grand Tournament with his trusty Hammer, Mjölnir, and his powerful Orb.
– Onyx – The powerful Guardian and Protector of Castle Batavia, Onyx has been offered a place in Valhalla and now defends it ruthlessly with her Cannon and Gauntlets.
– Jhala – Given the title “Exalted Lion” by Apollo himself, Jhala “The Unbroken” takes the glamor of Valhalla in stride while having fun slaying her foes with Axe and Sword.
– Brynn – Competing for the pure joy of it, this Valkyrie has seen many victories due to her skill with the Axe and Spear.
– Nix – Led by a thousand year hunt, this reaper, armed with both Blasters and Scythe, has found herself a new bounty in Valhalla.