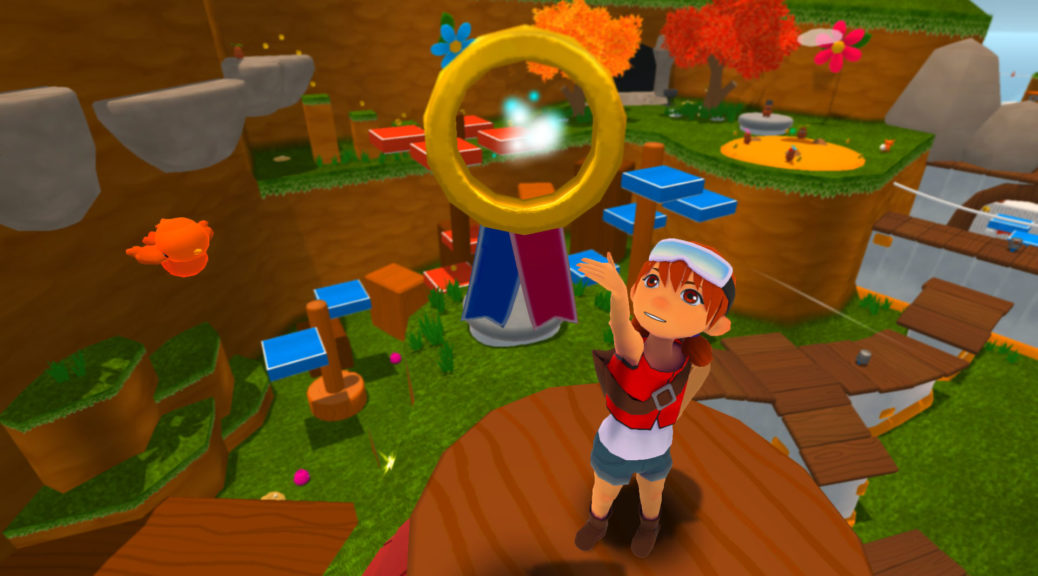 The Internet is abuzz with discussion around Nintendo’s latest 3D platforming masterpiece, Super Mario Odyssey. What many people don’t know, however, is that another 3D platformer, an indie gem called “Poi”, was released onto the Switch’s eShop just a few days before Odyssey’s big launch. This game is what we’ll be looking at today. So is Poi a joy, or a ploy? Read on to find out. 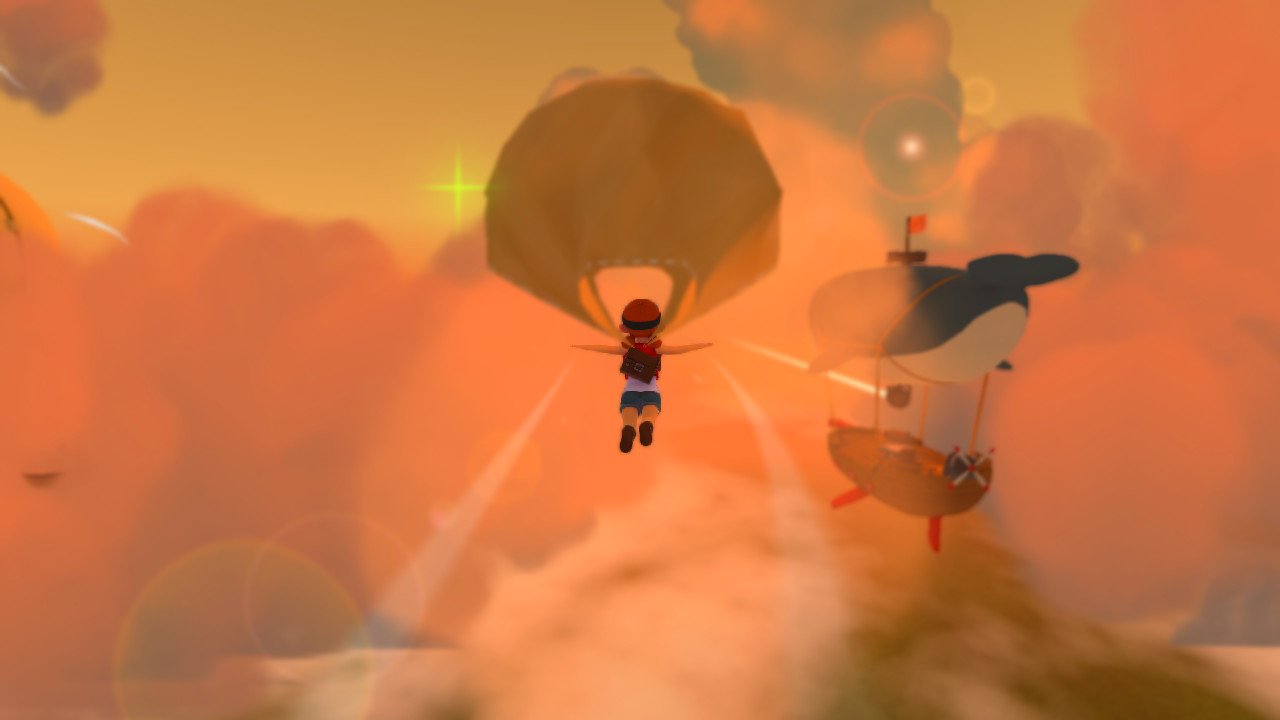 The game’s story is simple and serves to set the stage: a pair of runaway orphans are found by an old veteran explorer who recruits them to help collect his missing Explorer Medallions, which were scattered from his airship during a massive storm. Once you pick your character (the nameless young boy and girl play the same, so it’s a matter of which design and voice you prefer) and complete a tutorial stage, you take to the skies in the airship and that’s where the journey begins. 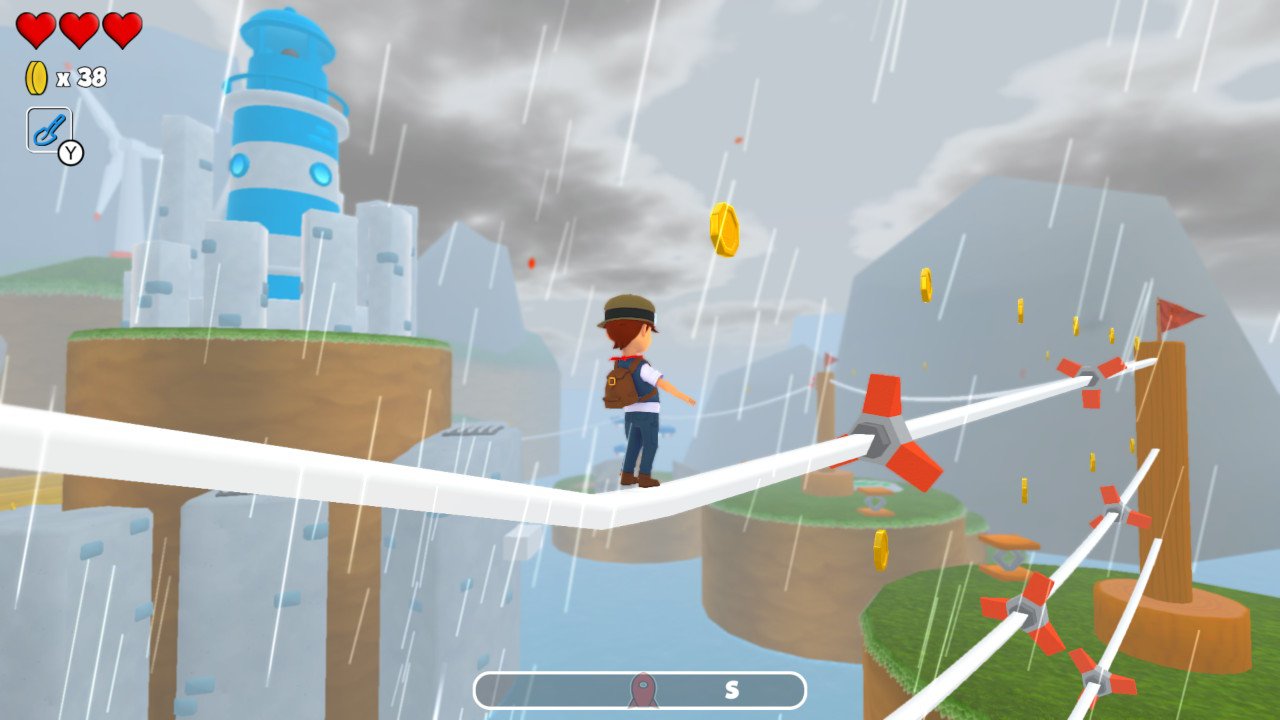 The Sky overworld starts out as an empty expanse of clouds, but as you progress through the game, your ship will be joined by many other airships and floating islands, bringing new characters and challenges. Gliding through the sky gives Skyward Sword vibes, but once you travel to a platforming challenge or one of the game’s four main worlds, the gameplay is more Mario. Your character can roll, sprint, jump, air jump, wall jump, triple jump, roll jump, side-flip, dive, and more, in a manner that’s reminiscent of a certain former plumber. That’s not to say Poi doesn’t feel unique; it just wears its inspiration on its sleeve. It’s easy to get a grasp on the controls and start jumping through the world with reckless abandon. The platforming here just feels good.

Well, for the most part anyway. No game is perfect, and Poi contains some minor irritations in the gameplay. For starters, the combat: jumping on enemies’ heads is easy enough, but some common baddies cross the line into frustrating. Taking a hit from some enemies and obstacles sends you flying in unpredictable directions, occasionally turning one hit into a game over. And then finally, the bosses are a bit of a mixed bag. One of them is great, one is awful, and the rest are playable but below average. 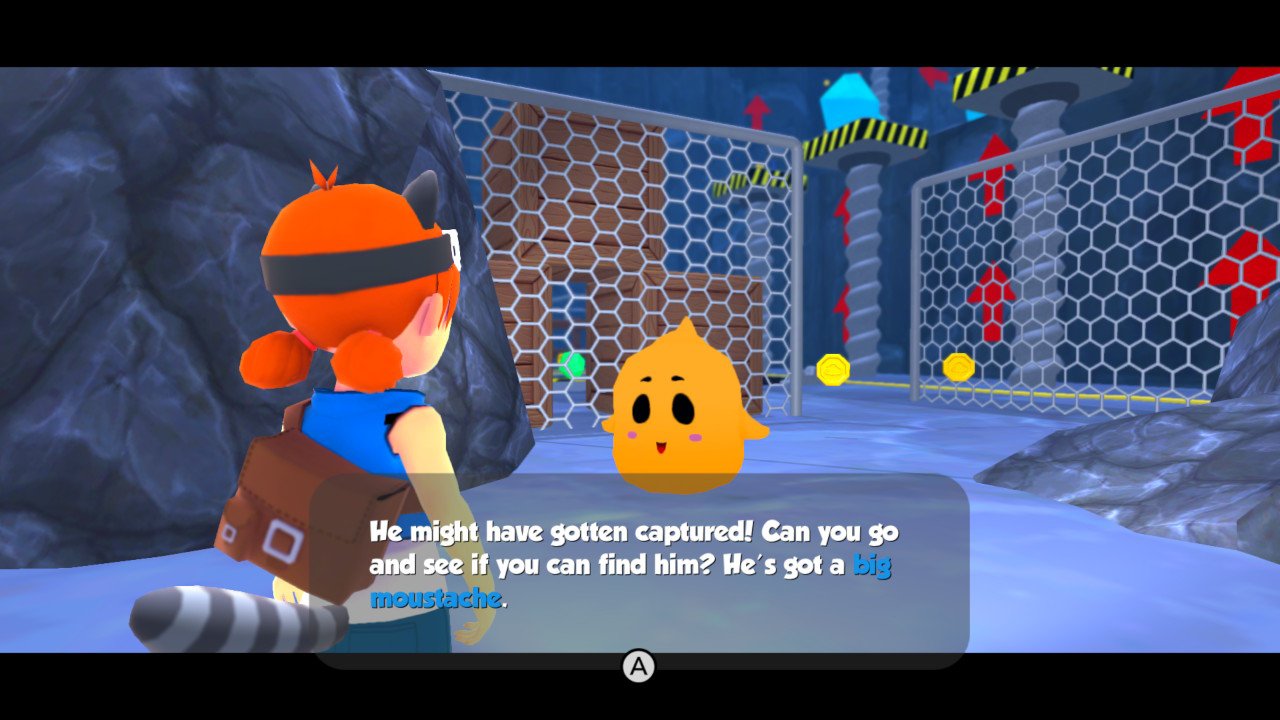 Jumping through the game’s colorful worlds is a joy, once you get a handle on the nuances of the controls. There are 7 Medallions to collect in each. Some of these are the same in each stage: collect 7 keys, buy a medallion with 100 coins. But the rest are challenges unique to the stage, and are usually based around solving the problems of the local residents. The Rooty Boys need you to turn on the power to the windmill, or find out why the lighthouse isn’t lit. My favorite stage, the Crystal Cavern, is populated by the Orange Ghoulies and Green Ghoulies, sworn rivals who are constantly sabotaging each other’s mining operations. On your way to each objective, there will be platforming to be done, yes. But there are also fossils and Golden Gears to collect, as well as locations to find. Finding all of these will reward you with more Medallions, given out by NPCs in the Sky overworld.

There’s a lot of content in this game outside the four main worlds. From the Sky, you can also access challenge levels, secret challenges, and two smaller snow-themed worlds. There are 100 Medallions to collect in all, and getting 100% can take about 9-12 hours depending on your skill level. There’s even a New Game+ option that allows you to replay the game with mirrored levels and just one heart. 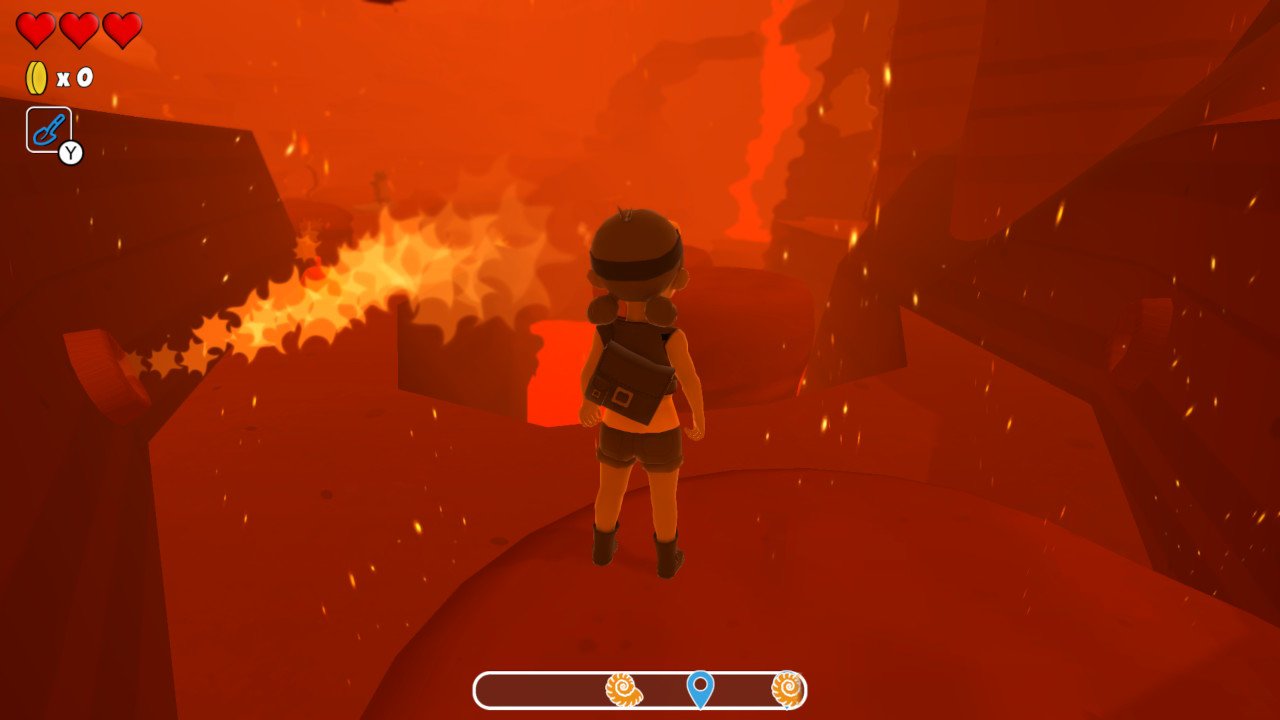 The game’s fully orchestrated soundtrack composed by Lyndon Holland is absolutely fantastic. The standout tracks are the game’s sweeping main theme (which shows up as a motif in many other tracks) and the soaring theme that plays in the Sky Overworld, but from start to finish, the OST practically steals the show. I can’t lavish enough praise on this game’s music. And exclusive to the Switch version is a jukebox that lets you play any track. (In fact, I’m listening to the music as I write this review.)

The last thing to note is the price point. This is the “Explorer Edition,” exclusive to the Switch, which includes an unlockable soundtrack, art book, and some exclusive hats and costumes. However, it’s priced at $29.99 USD, which is $10 more than the PS4 and XBox One version, and $15 more than the PC release. In the opinion of this reviewer, the added content does not justify the price hike. (The portability factor, on the other hand, might be worth it.) 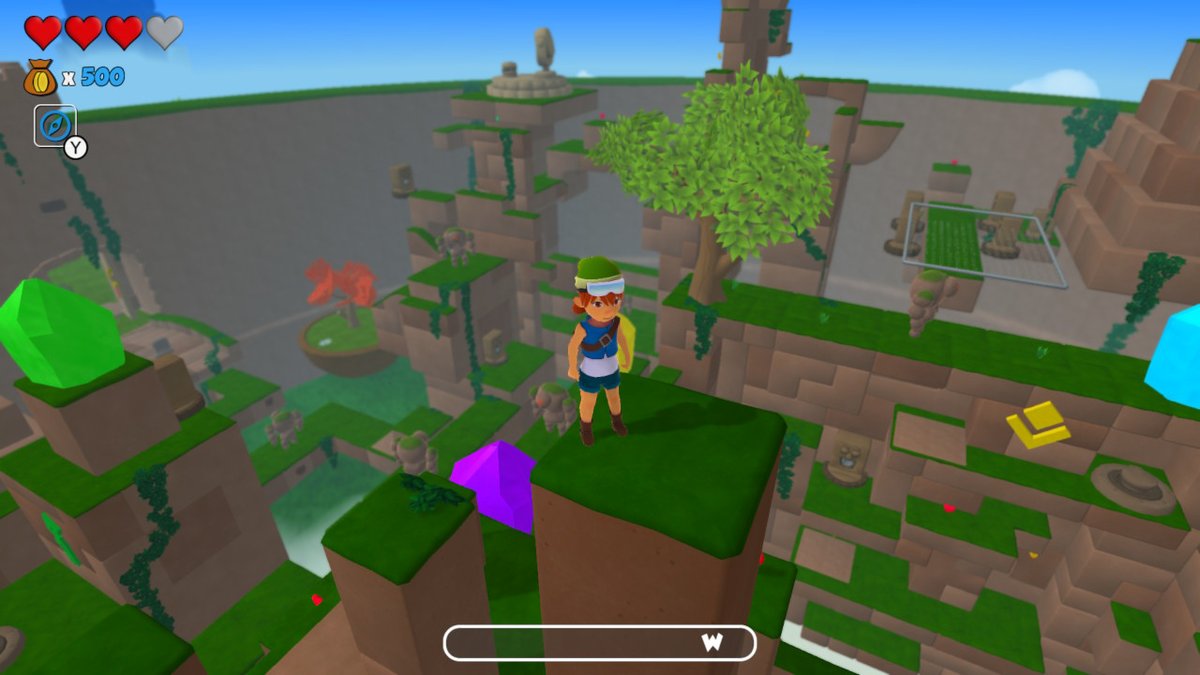 Minor quibbles aside, Poi is a very solid 3D platformer. If you’re a fan of the genre, you can do a lot worse than picking up Poi. It’s obvious that the small dev team put a lot of care into the game, and it’s a fun adventure well-deserving of your time. You may already be playing Odyssey, but consider collecting some Medallions once you’ve gathered your fair share of Power Moons. You won’t regret it.

Soup Verdict: Poi: Explorer Edition is the soup from your childhood, just as tasty as you remember it.

A review code was provided by Alliance Digital Media for the purposes of this review.