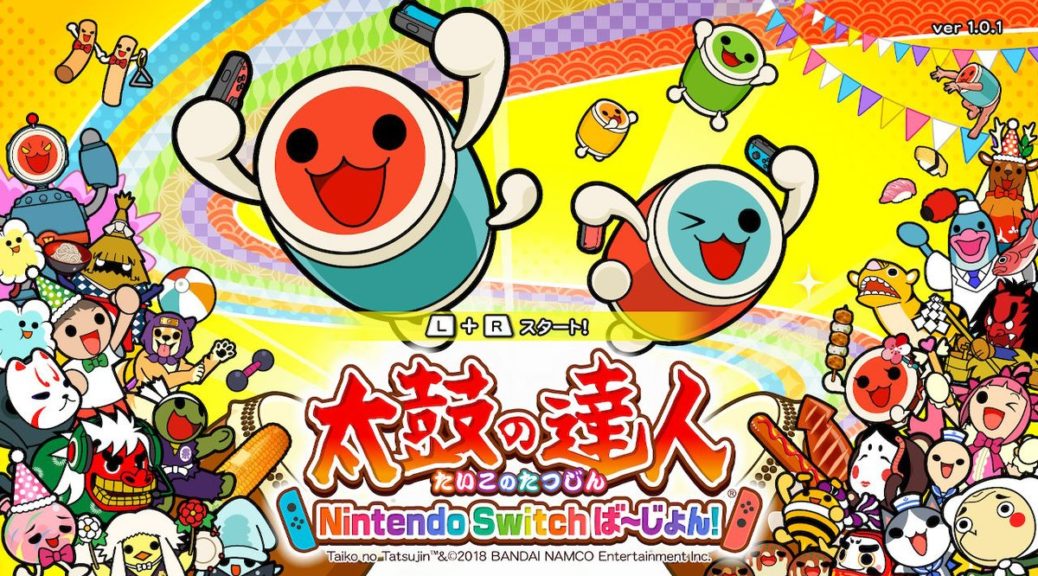 In Taiko no Tatsujin, the goal is simple – hit the notes as accurately as possible to play and complete the song. There are different types of notes to beat, but the primary ones are the Red Don note, which requires the player to beat the face of a Taiko drum, and the Blue Kat note, where the player has to hit the rim of the drum. 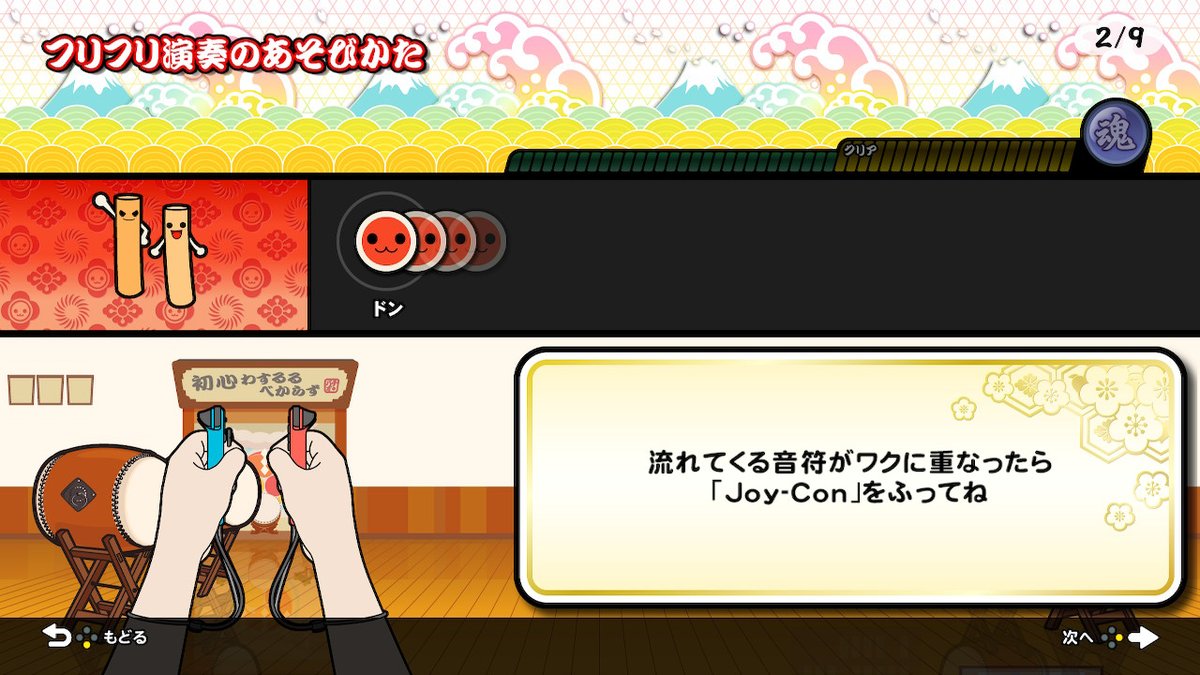 Upon starting the game, it will become apparent that there are many control options supported for Taiko no Tatsujin: Nintendo Switch Version, something which I hope more developers will learn and follow. The recommended way to play is Furi Furi Ensou, where players move the Joy-Con as if they’re beating the Taiko drum.Furi Furi Ensou is a fun and easy to pick up control scheme, as all you have to do is pretend beating a Taiko drum. To add on to the experience, HD Rumble is utilized, which made me feel I was really pounding on a drum. The problem comes when trying to hit Blue Kat notes, as the game may not recognize the motion to hit it correctly. It takes time to fully master Furi Furi Ensou, especially when playing in higher difficulties or faster songs.If you’re playing in Handheld Mode or with the Nintendo Switch Pro Controller, button controls are also an option. I personally like button controls as they’re more precise than Furi Furi Ensou. In fact, thanks to the button layout for Taiko no Tatsujin, you can actually completely play the game with one hand (if you’re right handed, you can simply press B to hit the Red Don notes and R/ZR for the Blue Kat notes). Sharing the Joy-Con (aka playing using one Joy-Con) with another person also works with button controls. 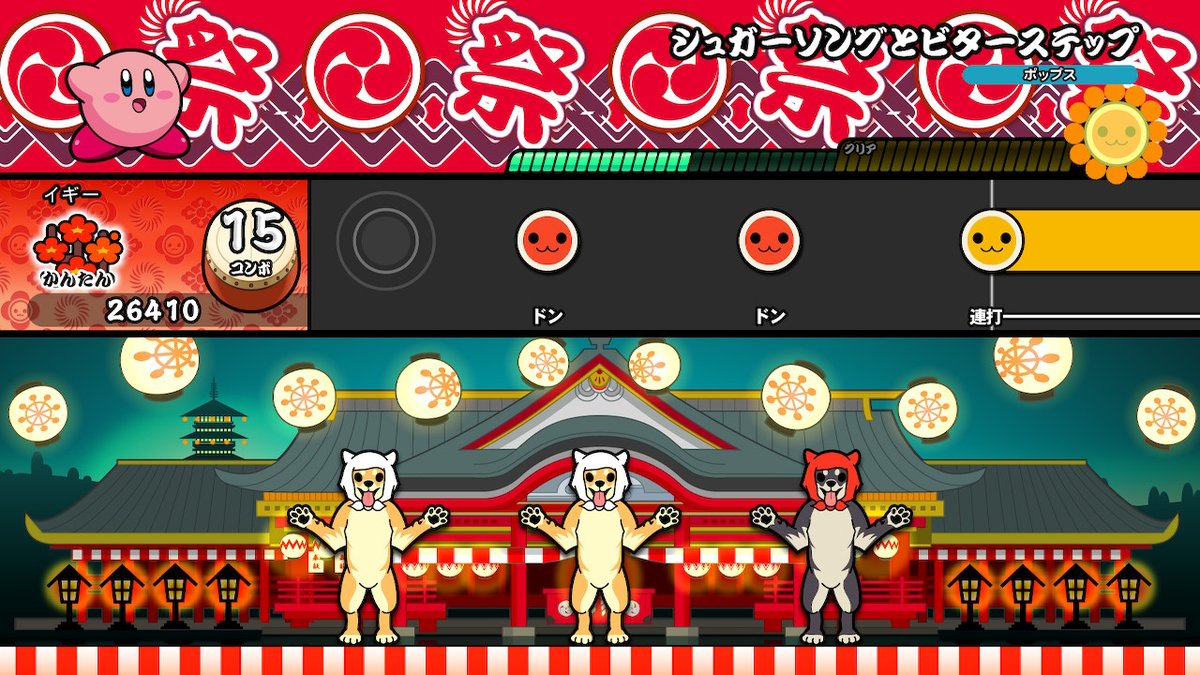 Another way to play the game is through touchscreen controls, only possible when playing in Handheld Mode. A virtual drum appears in the centre of the screen, and you’ll have to use your fingers to tap and play. It is fun but best played when your Switch is laid on the table. The last way to play is by using HORI’s Taiko no Tatsujin Drum Controller. It’s said that the Drum Controller offers the best and most authentic Taiko experience ever. As we do not have a Drum Controller, we are unable to comment on how it plays at this point of time.

Every song has its own notechart and there are four different difficulties for players to get into, the hardest being Oni (demon). If you’re new to the series, the easiest difficulty will help smooth you into how the game works, while there’s the Oni difficulty which takes a lot of time to master. It’s going to take a lot of time to master every song at Oni level, for those of you aiming to complete the game with the best possible scores. 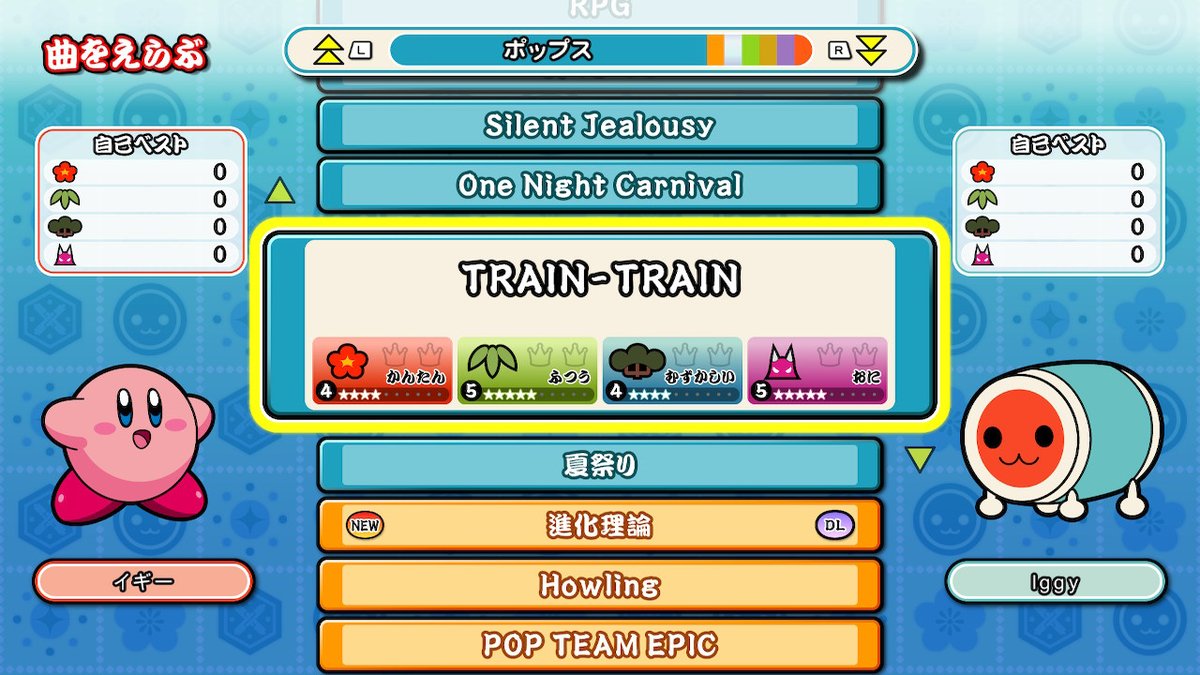 What makes Taiko no Tatsujin fun is the simulation of beating a drum to the rhythm of the your favorite songs. The Nintendo Switch version of Taiko no Tatsujin comes with 74 songs, and 64 are unlocked right from the beginning. One song lasts about 1 to 2 minutes.

As Taiko no Tatsujin is obviously geared towards Japanese players, those who are familiar with J-Pop, anime, and other types of Japanese music will feel right at home with the song selection. Popular J-Pop songs such as RPG, Zenzenzense, and many more are included. Those expecting a more western selection will probably be disappointed, as there are only a handful of classics and movie songs from the west. The voice and music quality for each song are also remarkably high.

Nintendo and Bandai Namco have worked closely together for Taiko no Tatsujin, with the addition of Nintendo songs from Super Mario Odyssey, Splatoon 2, and Kirby’s Dreamland. You can even play as Kirby or the Squid from Splatoon, who will cheer you on while playing the songs. If you’re a hardcore Nintendo fan, this is probably something you’ll appreciate while playing Taiko no Tatsujin Switch, but I don’t think it makes or breaks the entire game. 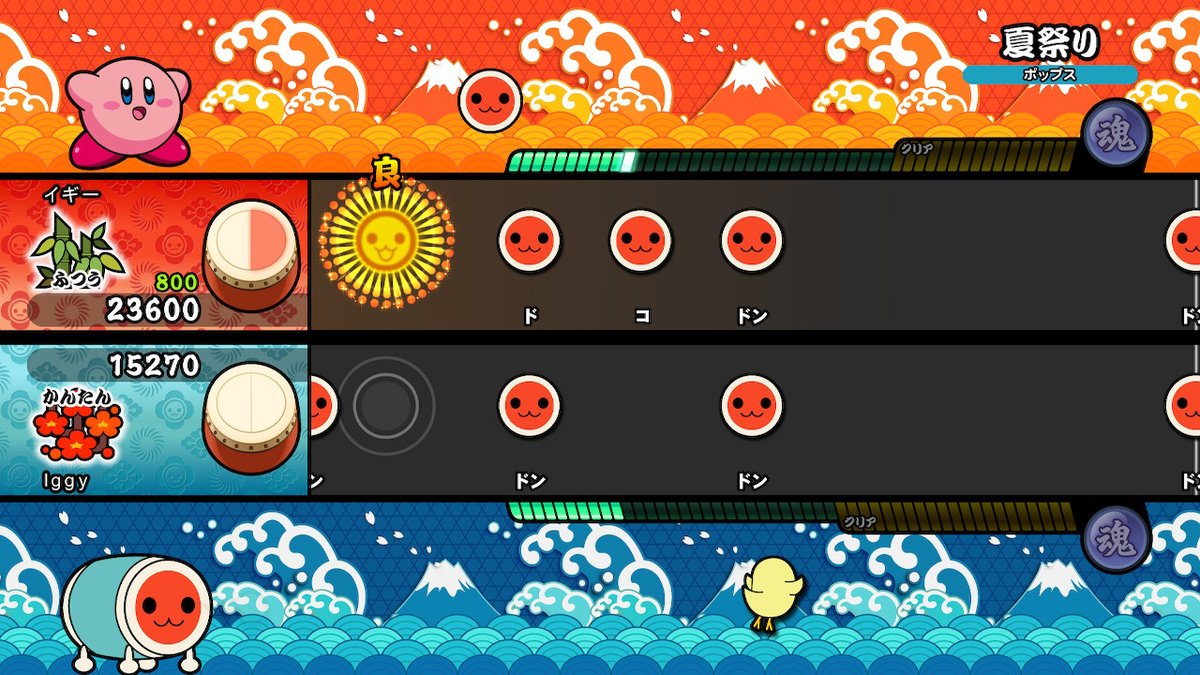 Speaking of which, the characters that you can choose to play as in Taiko no Tatsujin Switch have special characteristics that will enhance or lower the difficulty level of your game. Extra characters and songs are unlocked once you reach certain milestones. It shouldn’t take you more than a few hours to unlock everything in the game.

In Performance Mode (aka playing the songs you want), you can play with another friend by simply sharing another Joy-Con, using up to 2 Drum Controllers, or using two pairs of Joy-Con or two Nintendo Switch Pro Controllers. There are no strict rules on the controllers you have to use, so feel free to mix and match. You can change the rules for each song. At the end of the song, you get to see who has the highest score, and that’s it. Multiplayer works as it should be but it’s really bare bones, similar to how it’s done at the arcades.

Taiko no Tatsujin Switch also supports Performance Mode for up to 4 players, but you’ll need at least 2 to 4 Nintendo Switch consoles in order to play. We couldn’t comment on how the local wireless multiplayer option plays until we get to try it out with more players. 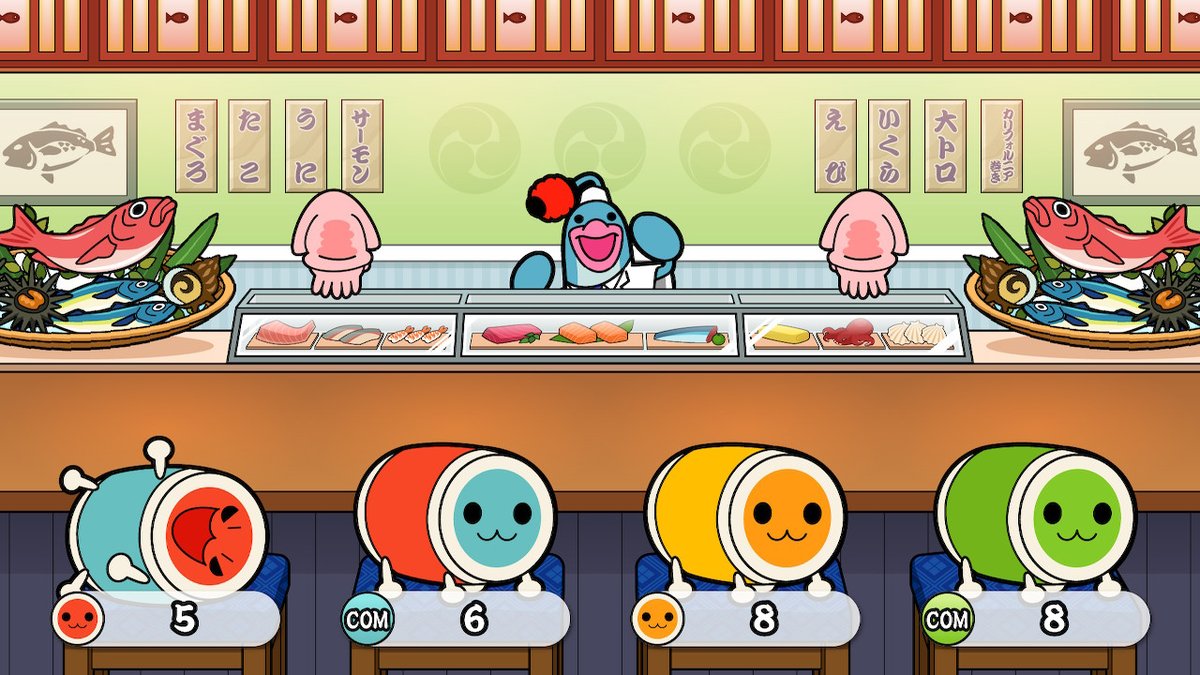 Besides Performance Mode, there’s also something called Party Mode, a mode where up to 4 players can participate on a single Switch. In Party Mode, you get to play multiple mini games against other players, most of which are inspired by Japanese culture. Vacant slots are filled up by CPU players, which are a hit or miss in different games. The mini games are pretty similar to the ones found in Rhythm Heaven, whereby you need to hit the button at the right time by looking or hearing for cues. The player who achieves the highest score wins.

For instance, there’s a mini game where waiters will serve up ramen, so players have to hit the button at the right time in order to eat it. If you’re too fast or too slow, you’ll fail. In another mini game, you’ll need to time when and how you wave your flag based on the conductor’s instructions. 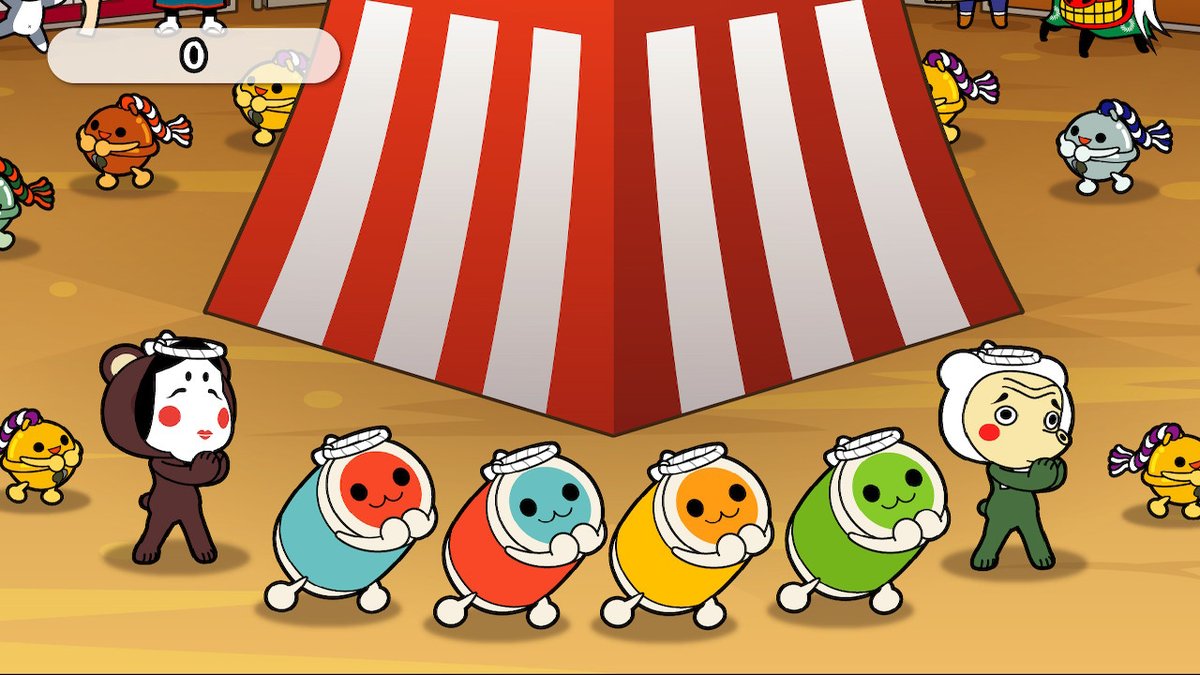 Party Mode mini games are generally fun to play, and there are over a dozen of them. There are three types of mini games – competing against everyone else, competing against a team, and everyone working together. You unlock more mini games (usually tougher versions) as you get better at them. Again, control schemes such as the touch screen, button controls, and Furi Furi Ensou are supported.

I’d say that the Switch version of Taiko no Tatsujin is superior to previous titles, given that this is the first Taiko no Tatsujin console experience that’s portable. Multiplayer is a huge plus, and so are the 74 Japanese songs included with the game (unless you don’t like Japanese songs). More songs will probably be added in the future in the form of paid DLC. 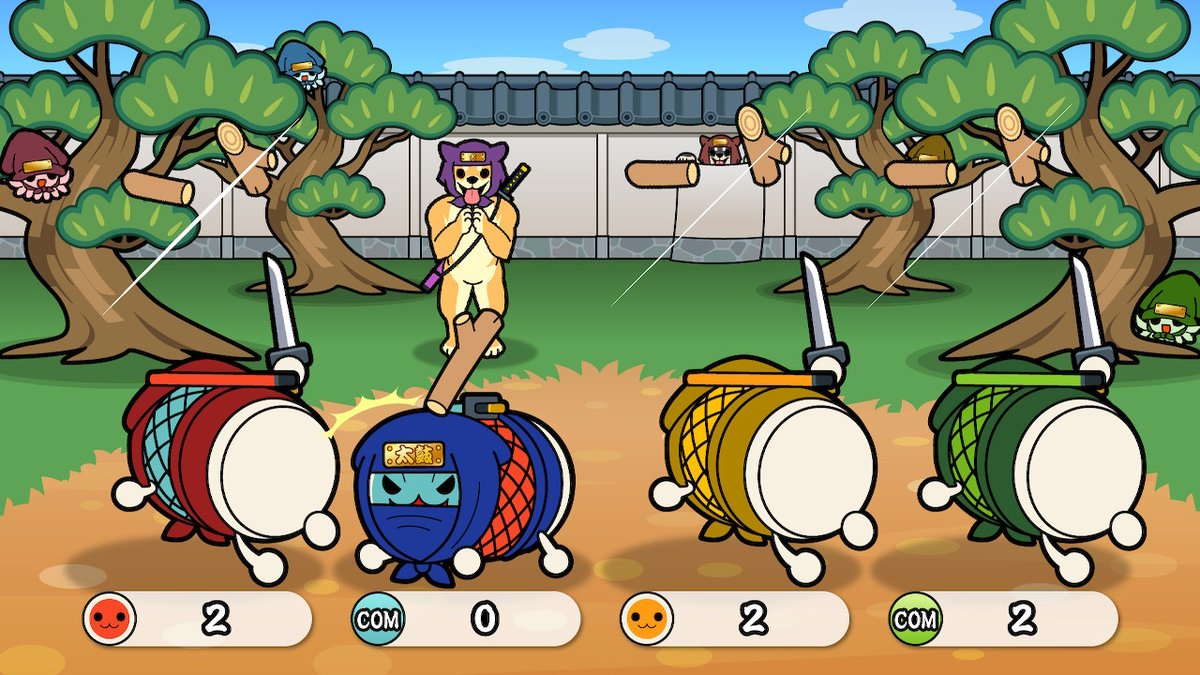 There’s really no excuse not to pick this up as a free English patch will go live on August 9. Even so, Taiko no Tatsujin: Nintendo Switch Version is understandable to those who don’t understand Japanese, as it’s pretty much self-explanatory even through the game’s instructions.

Soup Verdict: The best Miso Soup you’d ever have.

The physical and digital versions of Taiko no Tatsujin: Nintendo Switch Version and the Drum Controller are now available for purchase via Amazon Japan. Read our guide to find out how to purchase.