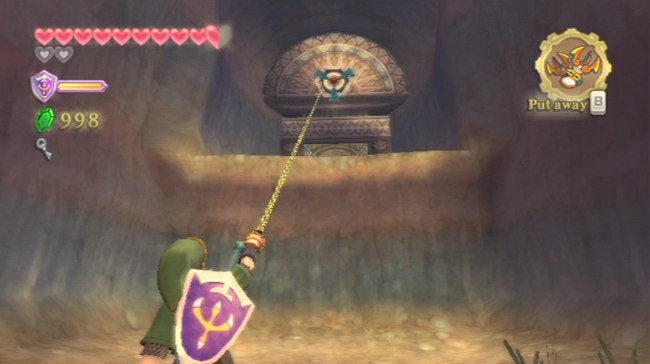 When The Legend of Zelda: Breath of the Wild was in development, Nintendo was considering implementing the Hookshot in the game.

However, they ultimately decided going against it as players could climb or parasail to reach anywhere they wanted. Check out what Eiji Aonuma and Hidemaro Fujibayashi have to say below.

Aonuma: We did consider using [the hookshot] to climb, and then you’d parasail down, but initially when we had the hookshot [in previous Zelda games], it was always that you target something, and that was a game mechanic of itself. But that kind of defeated the purpose of what we wanted to accomplish in Breath of the Wild. With the hookshot, we always had to give it towards the end of the game, or else players could just go anywhere. But in this game, you could do that by climbing and parasailing.

Fujibayashi: In the early stages of development, we did actually do some tests with double hookshots and just being able to kind of go anywhere, like Spider-Man. Your mobility and your speed was just kind of incredible. We did do some tests like that.

Honestly, the hookshot kind of completely breaks the climbing mechanic. There’s lots of fans in the staff, even at pretty high levels, who really like the hookshot and they kept bugging me about it. I eventually just had to say ‘No! Hookshot is gone. There will be no hookshot in this game. If we put the hookshot in this game, it’s not going to work.’ We were just going back to what we did before, and [Breath of the Wild] is all about doing new things.