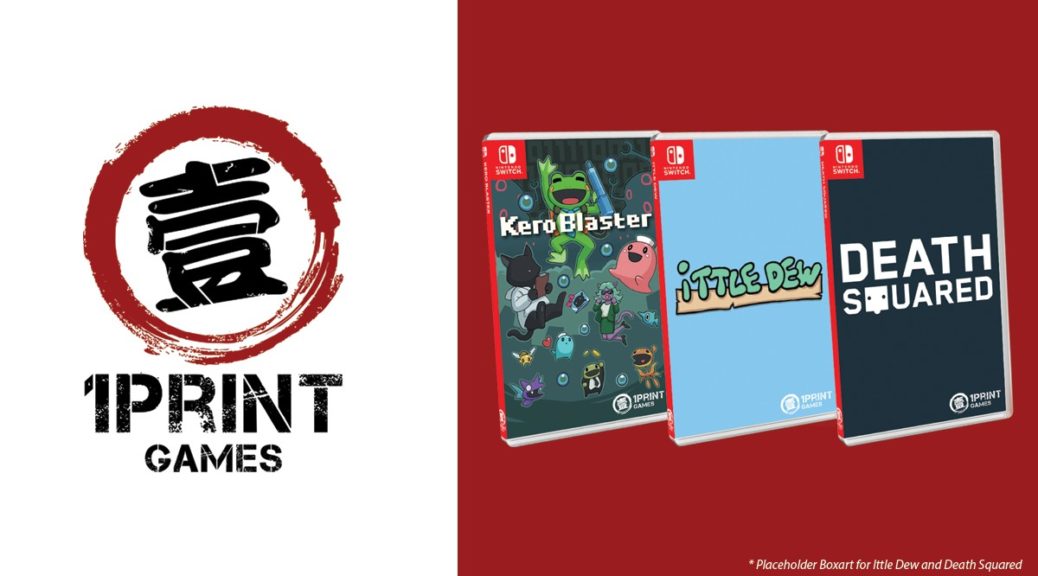 Earlier last week, 1Print Games officially revealed that it would be publishing a physical release of Kero Blaster on Switch. If you’ve been curious about the company and its mission, you can finally learn more here!

In a recent interview with NintendoSoup, 1Print Games’ co-founder Iggy indulged us with further details for what we can expect from the physical game publisher – as well as its first three physical releases. Check it out below!

1. First off, please tell us how you came up with the idea to start 1Print Games, Iggy.

Iggy: Earlier this year, Nitro and I came up with an idea to help and broaden the reach of indies and their games. We felt the idea wasn’t ready at that time, but the concept of “celebrating indie games” stuck in our heads.

In the last 2 years we also toyed around with the idea of publishing video games (digital and/or physical) but never really acted on it. After the previous idea earlier this year we assessed the feasibility of publishing physical games for the Switch and we decided to go all-in as we felt it fits with our concept of “celebrating indie games” and we think we could provide high quality and new products to the market.

2. 1Print Games’ first line-up includes Kero Blaster, Ittle Dew, and Death Squared. How did you guys settle on these three as your debut titles?

Iggy: We wanted a strong launch lineup with games that people love and play, and all three games are equally important for the both of us and other gamers that we know. Kero Blaster is made by Studio PIXEL, one of my favorite developers. It’s also one of my favorite games too. Studio PIXEL is well known for Cave Story and I feel Kero Blaster deserves more recognition as it’s a pretty good and fun game, even though it’s not the same as Cave Story.

The first Ittle Dew came out this year on Switch and Ittle Dew 2+ is well loved by fans on the Switch, so why not make a physical release for the original on the Switch since it has never happened before? In my opinion, it’s a pretty enjoyable and charming game. I think the Ittle Dew series definitely deserves to be “physically complete”!

3. Could you elaborate on why 1Print Games made the decision to have Kero Blaster in-hand first, instead of opening pre-orders in advance?

The inspiration to go in-hand actually came last year, I liked how Apple announces and offers their new products (such as the Watch and iPhone) a week before they launch. We don’t want to keep people waiting and we want everyone to get their games as quickly as possible so it’s a similar line of thinking.

4. Each copy of Kero Blaster will include bonuses such as a full-color booklet and soundtrack. Will it be similar for Ittle Dew, Death Squared, and future releases?

5. How often can we expect 1Print Games to release titles physically? On a monthly basis?

Iggy: The first three games will be spaced out by 1 – 2 months, but we are expecting to have shipped the first three by Q2 2020. We already have a rough idea of when everything will go out but I don’t want to make any promises as we could move things up. We already have a good feel of the processes that go into making Kero Blaster which, internally, had absolutely no delays, so I believe we should be able to follow our internal schedule.

We’ll limit ourselves to a maximum of one release a month, that is if we could get all the games we want. Personally, I’d be overwhelmed if we release anything more than one a month as there is a lot of effort that goes into making everything that comes in our Limited Editions. We are going for quality, not quantity. So if we don’t hit one a month, it’d just be more spaced out.

6. Some collectors might feel overwhelmed with the many limited-print companies out there already (e.g. Super Rare, Red Art, etc.). Will this present any challenges for 1Print Games, moving forward?

I feel the only similarity between us and the other “limited print” companies is the fact that we all sell our games on our respective websites, rather than retail.

7. If there was one dream game that you could publish physically, which one would it be?

8. Any closing remarks for Switch collectors out there, Iggy?

Iggy: I hope our customers will look forward to what 1Print Games has in store this year and beyond. We have poured a lot of heart and soul into making these limited editions. There’s not just the game but all the other little components that make it surprising and special.

That’s all we have, for now! Stay tuned for more news on 1Print Games in the future!

Still haven’t grabbed your copy of Kero Blaster by 1Print Games? The game is already in-hand and will start shipping on 29 November 2019 – so head on over to 1Print Games and order your copy today! (while stocks last)