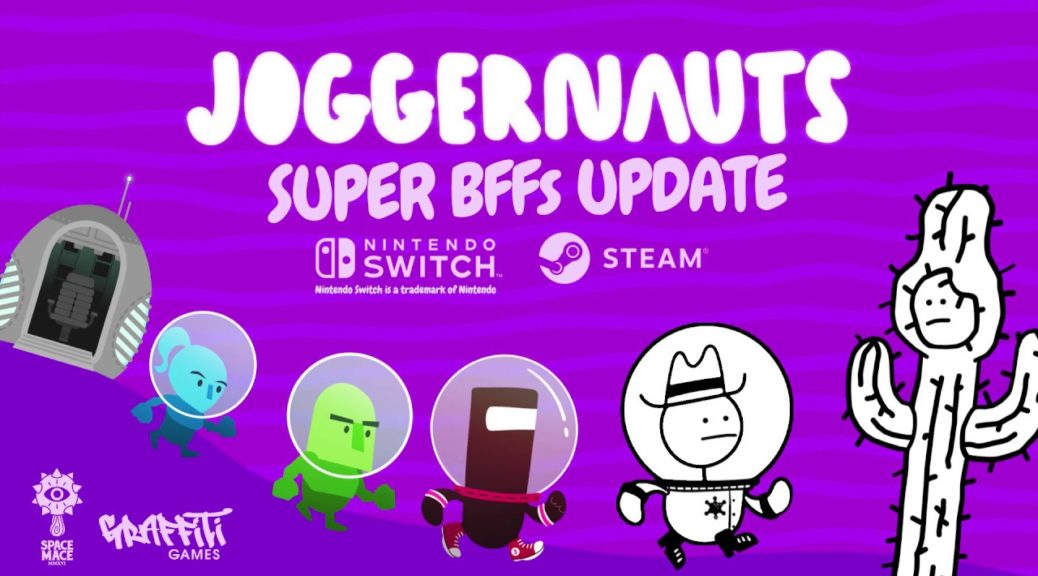 Joggernauts is now blazing forward with new friends in the mix!

Additionally, the update will add three new levels along with new difficulty options. Check out the update trailer below for more details.

Just in time for Christmas, Space Mace and Graffiti Games are providing gamers with the best present of all – amazing new guest characters and levels for autorunning party platformer Joggernauts (Switch, PC, Mac)!

The awesome guest characters include:

Cowpokes from West of Loathing. He was found in a makeshift saloon, which is odd because normally space ships don’t have saloons, and definitely not in their cargo rooms. I mean, there was that one TNG episode, but… well, nevermind.
Hue and Val from Runbow. They were discovered trying to turn a box of Switchalizer 5000s into some sort of color-based racing game.
CommanderVideo from BIT.TRIP Runner. He managed to climb a set of stairs, slide into an escape pod, and land on the moon Splizorp. He should be easy to find in one of the new levels, though.

Additionally, Joggernauts has three new levels. These are all escape pod rescue missions where you won’t find more trophies, but you will find unlockable characters.

Update Modifiers Menu – In Joggernauts you can modify certain aspects of the game, such as the game’s speed and the number of shared hearts for your team. In the update you can now access the Modifiers menu during level play from the pause menu. You will have to restart the level from the nearest checkpoint, but it is a lot more convenient than having to go back to the world map to make changes.

Game Difficulty Updates – Even with these Modifiers, we’ve had feedback that some levels had sections that were too difficult for even the best runners. We agreed! We’ve made some minor mechanical changes you might not even notice visually, but that will hopefully make the learning curve not so steep.