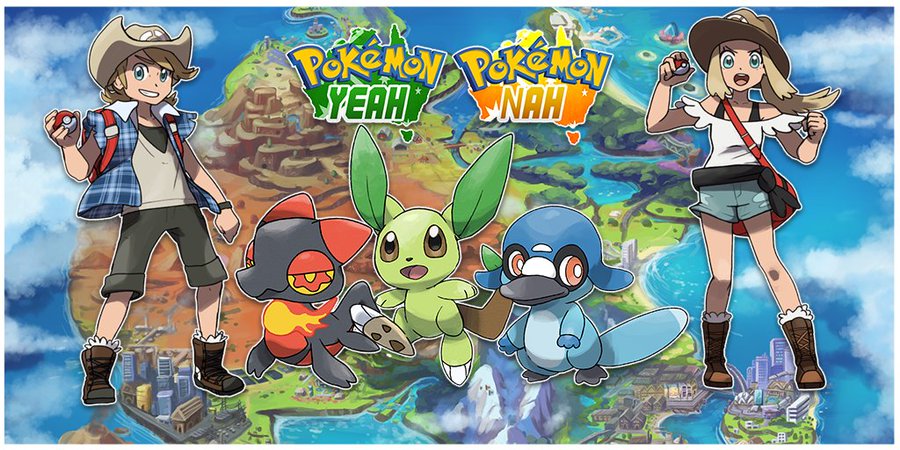 Now that Pokemon Sword & Shield have been released, many Pokemon fans are already looking forward to what the next games could be like.

One such fan is VivinkArt, an artist who has been posting his own take on the next big Pokemon games on Twitter. Titled “Pokemon Yeah & Nah“, it takes place in VivinkArt’s own original region based on Australia. VivinkArt has funished his creation with a great amount of detail, including an original world map, player characters, starter Pokemon, and much more.

You can check out some of his posts below, or view everything on his Twitter account here.

G'DAY. With the hype of #PokemonSwordShield right around the corner, care to have a look at an Aussie Pokemon game, Pokemon Yeah and Pokemon Nah?
Set in the region of Straya, players will experience the unique land of down unda.

This thread will have art for Yeah and Nah! 🇦🇺🦘 pic.twitter.com/olDqXQUD5a

Here's a higher res, clean version of the map for those who were asking!
A location version will be posted later today. pic.twitter.com/iqmYsbWxYD

Meet Skippee, the completely legit and real Kangaroo Pokemon 🍃 With incredibly strong kicks and a powerful boomerang tail, Skippee and their evolutions are a fantastic companion to have in the outback. pic.twitter.com/UvXnntsv61

Meet Pladdle, the too-good-to-be-real Platypus Pokemon 🌊 Pladdle and their evolutions are helpful Pokemon with a beaut' of a mullet. They can be found saving tourists from beaches and reminding people to "slip, slop, slap". pic.twitter.com/YEjvVzWBnH

Not everything is out to get you in Pokemon Yeah and Pokemon Nah. Meet Gallopoli, the Nurse Joy's companion for the Straya region.
A dedicated Pokemon that will truly never give up when trying to help other Pokemon and people.

I'll be posting up concept sheets in the replies! pic.twitter.com/RbYhNh5jr3

Dropbare are a terrifying Pokemon, not many live to tell the tale of this Pokemon that drops from trees. A distant cousin to Komala, people are unsure how such a thing is related to the softer, cuddlier one.

DROPBARE IS BASED OFF A VERY REAL ANIMAL. YOU'VE BEEN WARNED. pic.twitter.com/TaI8XyzEbh

Yowies are both terrifying outback monsters but also sweet chocolates with hidden surprises in them.

No worries, Yowinji is a friendly Pokemon who will help you carry your heavy luggage. Don't anger Gamonsta, however. It won't end well. pic.twitter.com/eIwL8xMYaA

The Strayan Regional of Sandile. They are red, to match the searing hot, red sand of the Aussie outback and deserts.
Sandile open their mouths when lying around in the outback and create small flames, looks sort of like a lighter.

"Oi, can ya give us a lighta" pic.twitter.com/ugyVnP4y7b

During the Gold Rush in Straya, a miner brought over a Sableye from the Hoenn region. Overwhelmed by the abundance of gold and gems, the Sableye lost it's mind and indulged itself with riches. They're quite rare, but are considered pests due to their manic behavior. pic.twitter.com/jRrJ9hbmpQ

The 15th of November is #SteveIrwinDay and I had to celebrate with something. He's an absolute legend, the perfect candidate for the Champion and Professor of the Straya region. 🐊 pic.twitter.com/OMi0ml2Kq2