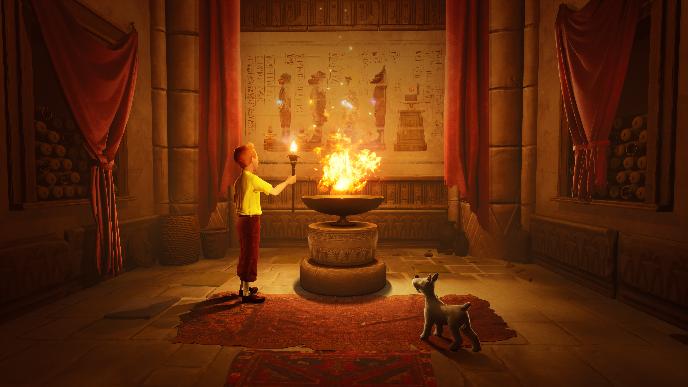 Fans of the popular Adventures of Tintin comic book series can now look forward to a new adventure, from Moulinsart and Microids!

Both companies have announced Tintin Reporter: Cigars of the Pharaoh, a new adventure game launching for Nintendo Switch and other major platforms in 2023. Namely, the game will see players follow Tintin and his companion Snowy into the depths of Pharaoh Kih-Oskh’s tomb!

Here are more details and a teaser trailer below:

Bruxelles & Paris, August 22 2022 – Moulinsart and Microids are delighted to reveal the very first screens for Tintin Reporter – Cigars of the Pharaoh’s video game adaptation. Developed by the Spanish studio Pendulo Studios, renown for their adventure games spanning over three decades, Tintin Reporter – Cigars of the Pharaoh will be released on PlayStation 5, PlayStation 4, Xbox Series X|S, Xbox One, Nintendo Switch and PC in 2023.

Inspired by an iconic adventure from the comic book series “The Adventures of Tintin” created by Hergé selling more than 275 million units worldwide, this new video game will sign the return of the famous reporter to the interactive medium thanks to a dynamic co-production by Moulinsart and Microids.

Tintin and his faithful dog Snowy will set sail for incredible adventures! After meeting with the Egyptologist Sophocles Sarcophagus during a Mediterranean cruise, the famous reporter decides to investigate the Pharaoh Kih-Oskh’s tomb. What terrible secret does the tomb hide? From Egypt to India and Arabia, Tintin and Snowy will follow a lead on narcotics trafficking all the way to the far east.

This new adventure game will immerse players into the captivating comic book’s universe and make them the heroes of an epic action adventure masterpiece. With an art direction faithful to Hergé’s drawings, this game is lining up to be a jubilant adaptation!

For Stéphane Longeard, CEO of Microids: “Being able to work on an adaptation of the famous Belgian reporter’s adventure is a delight. We started working on the game a few years ago and we cannot wait to show more to our players worldwide. If I had one thing to add, I’d say that we’ll do everything in our power to pay tribute to Hergé’s work and offer the fans the adaptation of their dreams”.

Nick Rodwell: Director of Moulinsart adds “The production of a new immersive video game for PC and consoles carries the adventure legacy of the most famous reporter. Our ambition is first and foremost entertaining and friendly to please the whole family. Microids is the perfect partner to accompany Tintin for this new adventure!”