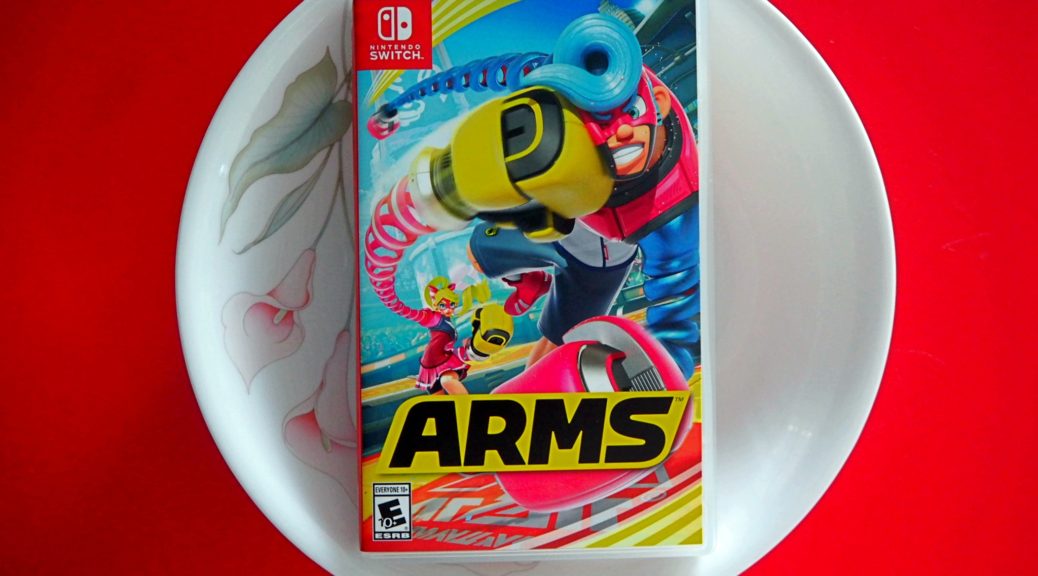 It is not very often that you see Nintendo come up with brand new IP. Two years ago they saw considerable success with Splatoon, but will they see the same success with ARMS? Let us find out.

ARMS is a straightforward fighting game. Other than the three other side game-types, it is hard hitting and fast paced. While I’m inclined to say that ARMS is a spiritual successor to the 80s PunchOut titles or even Wii Sport’s own wrestling mini-game, ARMS stands out in a whole new league of its own. Gone are the 2D arm flailing madness of those old games; to do well in ARMS you need to learn to jump and dodge as much as you punch. It is a fresh take on the wrestling-esque games, giving slightly more depth to a game that can get repetitive very quickly. 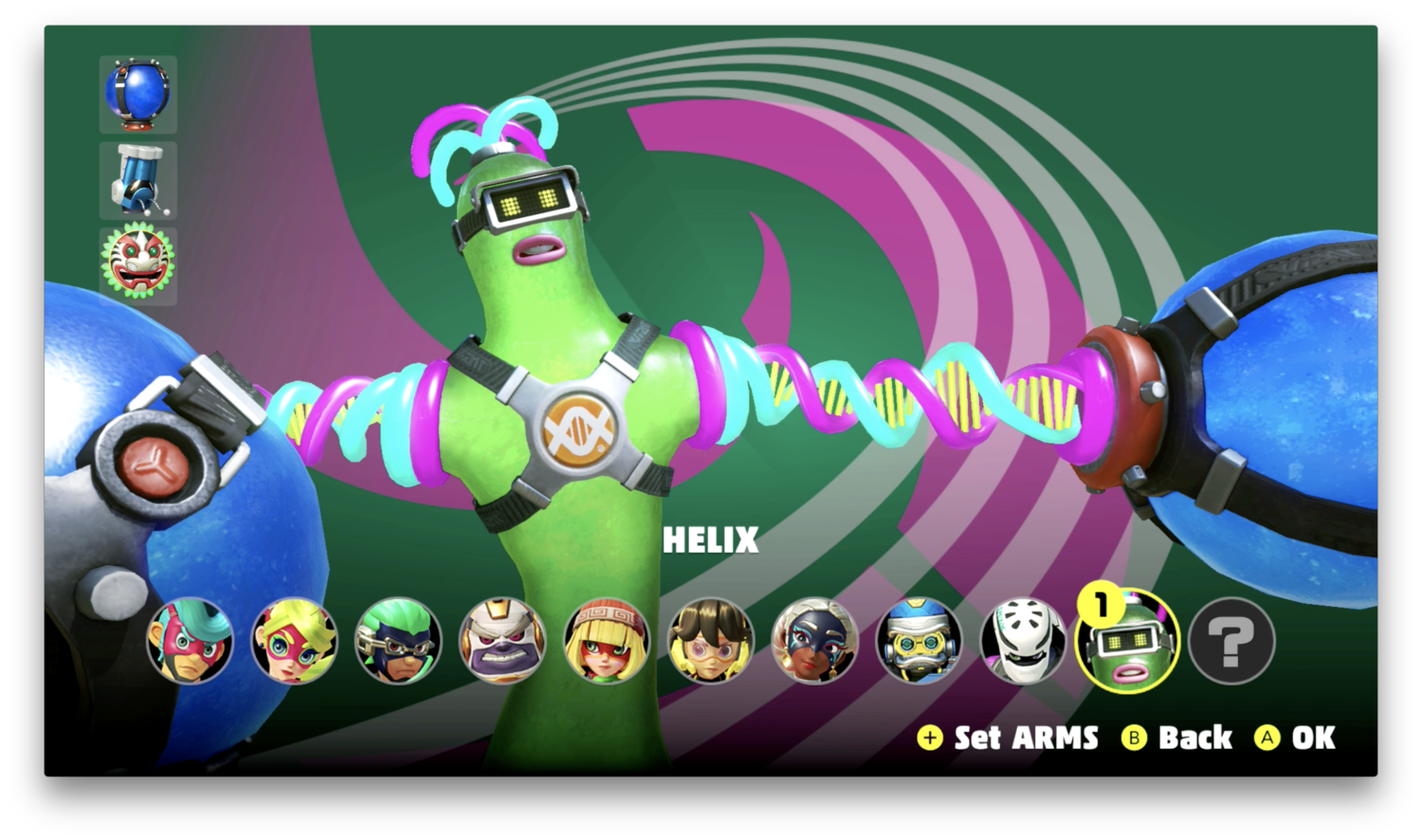 You start off the game with all 10 characters already unlocked, something that most gamers from this millennia will quickly appreciate. Some of the fighters are faster while others are heavier and each of them has their own unique abilities. As I’ve mentioned in the Test Punch before, each of the distinct characters will require some getting used to, therefore, do not be surprised if you find yourself suddenly losing a whole lot after changing out from your main.

Each of the characters also come with their own unique set of arms. Though all of the arms are unlocked from the start, they cannot be readily mixed and matched across characters. To allow one character to play another character’s arms, you have to cash in hard earned coins to play a “Target Practice” like game mode for a chance to win a random arm. This makes for some good replayability but can get tedious very quickly, especially considering that it takes around 10 matches in the arena – if you’re good – to even try for a non-guaranteed chance.

Narrative wise, there isn’t much to expect. Other than the small introductions in Grand Prix mode, there is hardly any storyline. While it is true that one does not buy a game like this to look for plot, the backstory advertising campaign that came before the game got me a little hyped up for a full story narrative, or at least greater backstory exploration. Perhaps I was expecting too much, maybe I ought to be content with the small snippets of lore in the load screens, but I was indeed a little disappointed. Even the multiplayer centric Splatoon manage to squeeze in a story-based campaign and ARMS would have been exceptional with one too. 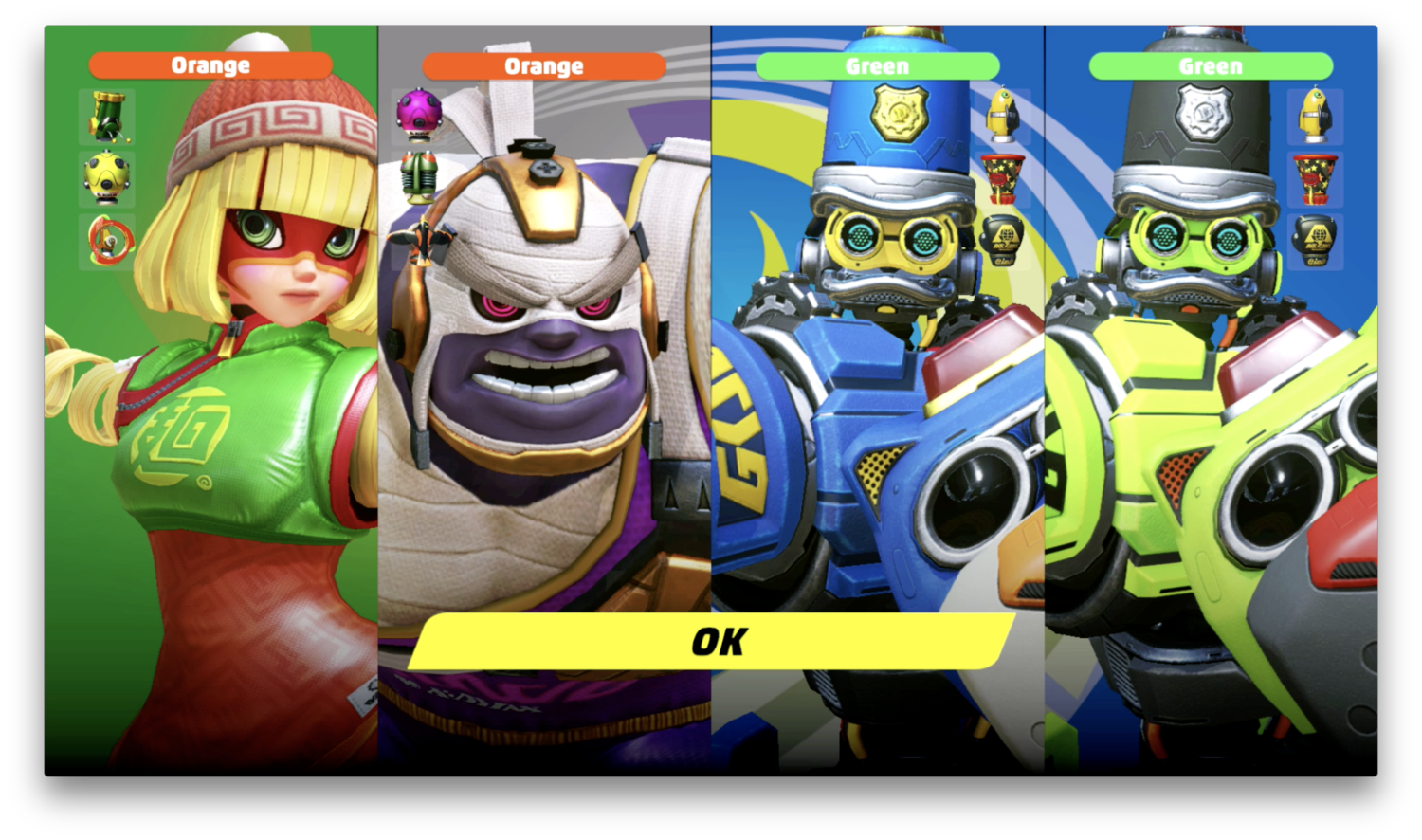 The main feature of ARMS is its multiplayer and boy is it good. Though you might find fun playing with a friend split screen on the TV or Switch’s small screen, the real fun only begins when you go online.

Just like Splatoon, there are two types of online matches, Party Match for filthy casuals like you and me, and Ranked Match for the hardcore fighters amongst us. The online lobby was fast and snappy and even if was not for you, the handy Warm-up section in the lobby is a good place to practice your skills while you wait for your match.

In my review, I had teamed up with a friend to take on people from around the world. A few things we quickly realised was how important chemistry is between you and your teammate, especially for 2V2 matches. Friendly fire is a thing in the game, unlike most 2V2 fighter game. In 2v2 matches your partner is your blood brother, chained together leg to leg. If he/she gets grabbed and tossed in the air, don’t expect yourself to be standing around.

One thing great about ARMS online mode is the allowance for variation. Being a relatively physical game (if you’re using motion controls), the game intelligently rotates between the two members for single player type matches, allowing the other to rest and catch a breather, something I truly appreciate. Also, the rotation among game types such as the Basketball inspired Hoops and Volleyball inspired V-ball, allows you to shake off the fighting fatigue for an alternative. 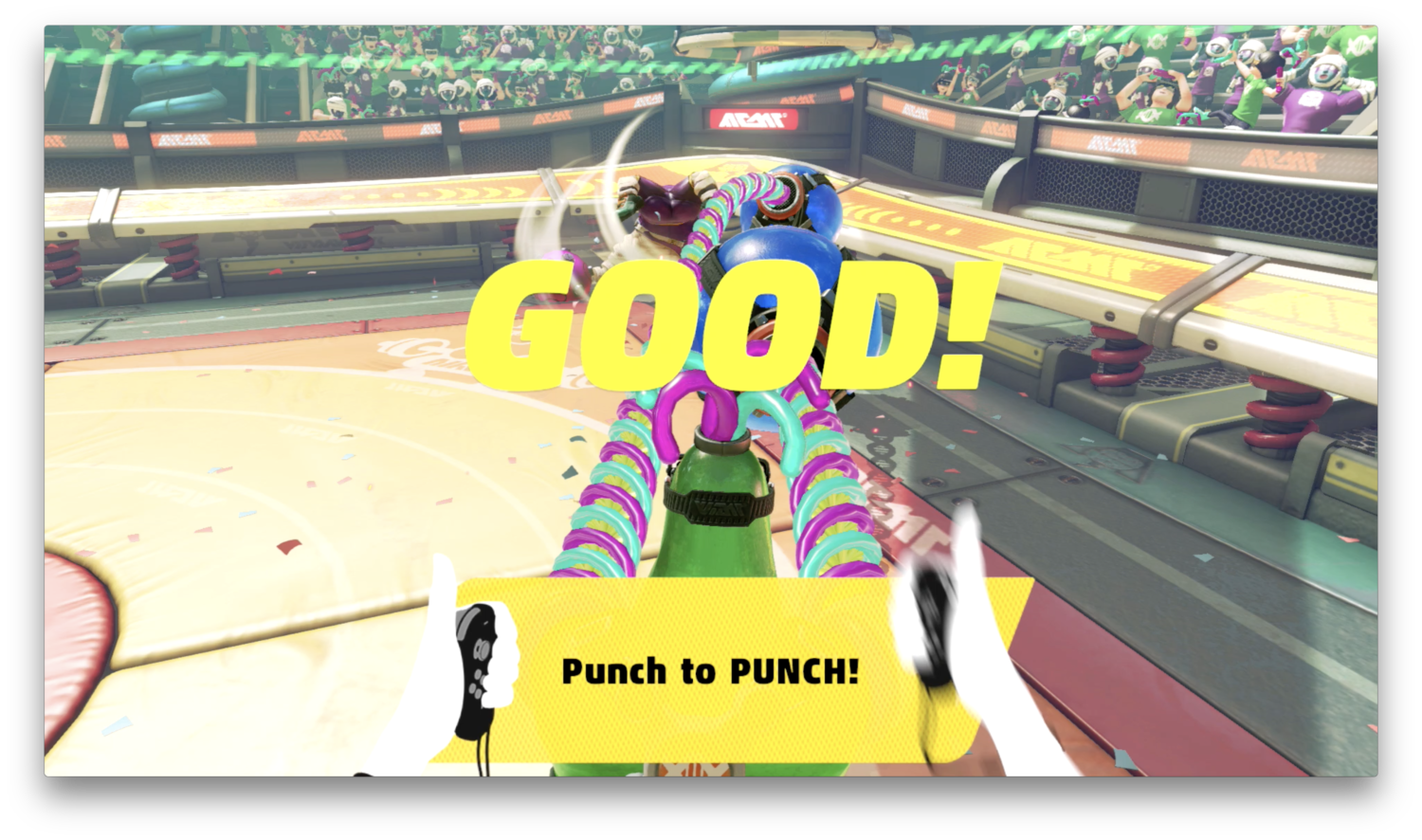 ARMS recommends you to use what they call a Thumbs Up grip, which is what their marketing department is calling motion controls. Motion controls are generally accurate and are more intuitive than the conventional button controls provided. Even ARMS producer, Kosuke Yabuki, said it himself the best players play with motion control; the intuitive aspect of motion control really makes a difference. Though fair warning, train up on those little hamsters you call muscle, you will feel the jelly in them after prolonged hours of play.

Button controls are quite messy, pressing down the left joystick to block is very unconventional for a fighting game and so is pressing two buttons for grab. Even so, it is still easily learnable.

There is no button smashing combos in this came so there is not much to worry or remember. However, appropriate techniques like blocking, dashing and punching have to be used in combination to allow for a more effective attack.

The graphics in this game is stunning. Being classically Nintendo, it does not try hard to jump over the uncanny valley towards realism. The colourful and sometimes cute aesthetics is readily appealable to anyone from young to old and can even cross gender boundaries. Some characters, however, may look stereotypical or even familiar to those in other fighting games; No one is going to fault you if you think Master Mummy looks like Zangief from Streetfighter. However, individually, they still produce a rather unique flair in each characters’ style. For a fighting, it’s art direction is unexpectedly friendly. More incredibly, the game runs at full 1080p 60fps on TV mode when playing alone, and it keeps its frame rate at 60fps for split-screen multiplayer (except 4 player split-screen). Punching feels smooth and even when a lot is going on during the match, the frame rate holds up. Though when playing split screen multiplayer, the game lowers its resolution to maintain the frame rate, it was the right trade-off to make.

Audio is very catchy as well. The earworm of a main theme will stick deep “woah oh oh oh” in you head even after just a while of gameplay. One thing I’m disappointed with, however, is the “voiceover” for Biff. If you have watched the Nintendo ARMS direct, you will be led to believe that Biff will be an awesome commentator for the game, or at least an awesome narrator. But what you get for Biff in the full game is a gibberish sounding piece of mess. In the grand scheme of things, it is a small point in the whole game, but it is something that annoys me quite a bit.

ARMS is an excellent motion controlled fighting game that is multiple times an upgrade from the Wii Sports era wrestling. It’s well-tuned motion control, gorgeous graphics and superb multiplayer support really deserve praises. It is a fighting game that finally adapts well to everyone’s play style, be it on the sofa with the TV, standing up with motion control, lying down as a button masher or outdoor wireless multiplayer on handheld mode.  Though the lack of depth in narrative and gameplay can make replayability hard at times, it is perhaps the best fighting game for everyone in the house to stick their ARMS in.

ARMS is now out for the Nintendo Switch and is available in both physical and digital.