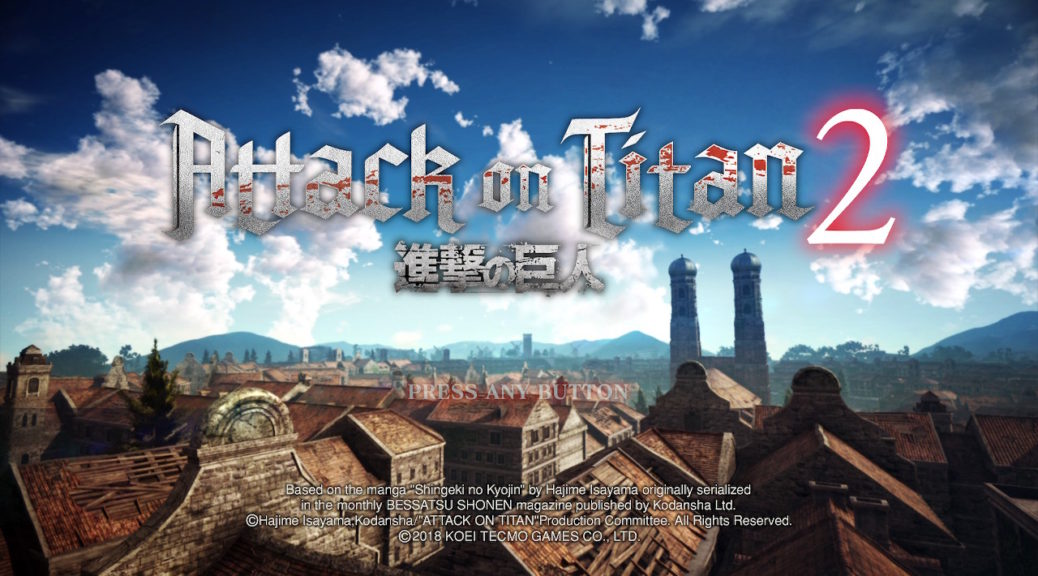 Every now and then we get a game adaptation of an anime or manga franchise. Sometimes such games do well, sometimes they just do not do the source material any justice. Attack on Titan 2 enters with high ambitions for itself, let see if they succeed at it. 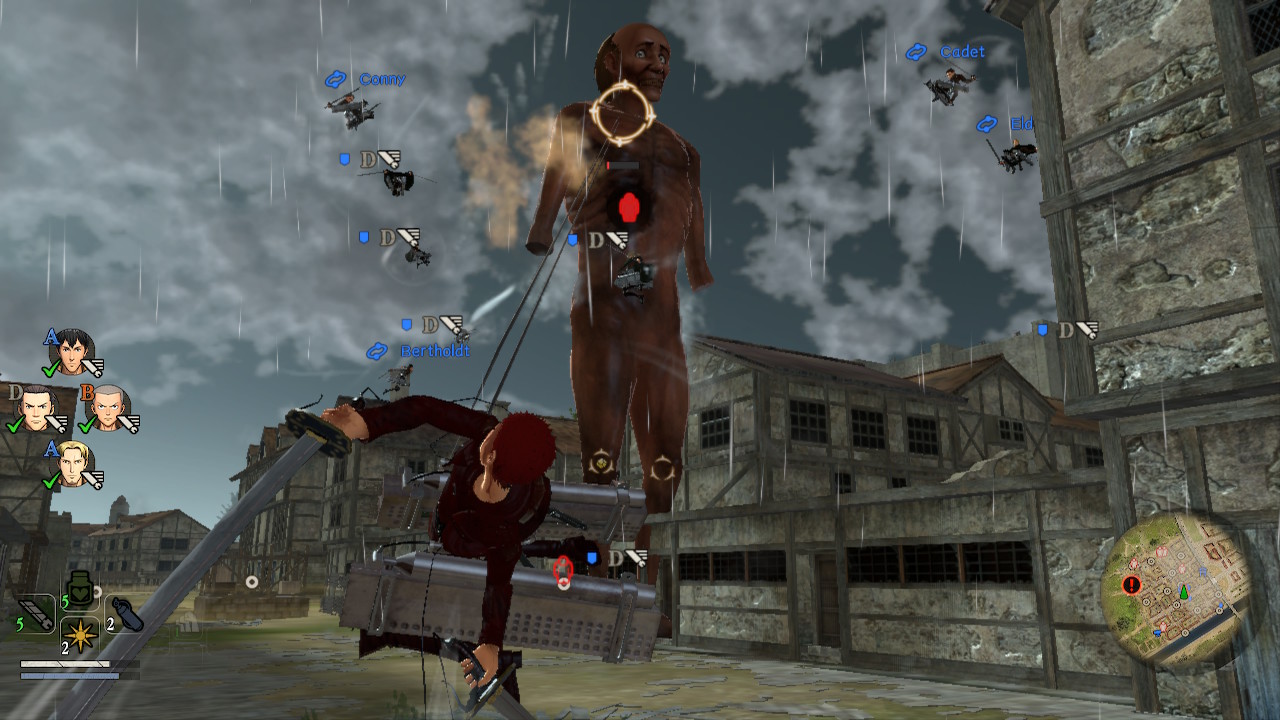 First, I would just like to declare my experience with the Attack of Titan series. I may not have played the first Attack on Titan game, but I have watched the first season of the anime. I’m familiar with the story but not an expert in it.

In any case, I did go in expecting to swing around the environments slaying titans. In that aspect, Omega Force really did not disappoint. Although the fight controls may take some time to fully master, especially the timing of slashes, flight controls were surprisingly intuitive. Swinging around the environments were something I unexpectedly enjoyed and the experience never got old. Even when horses were made available midway into the game, the sheer speed and “adrenaline” of swinging on the Omni-Direction Mobility (ODM) gear, will make you leave your steed for the air. 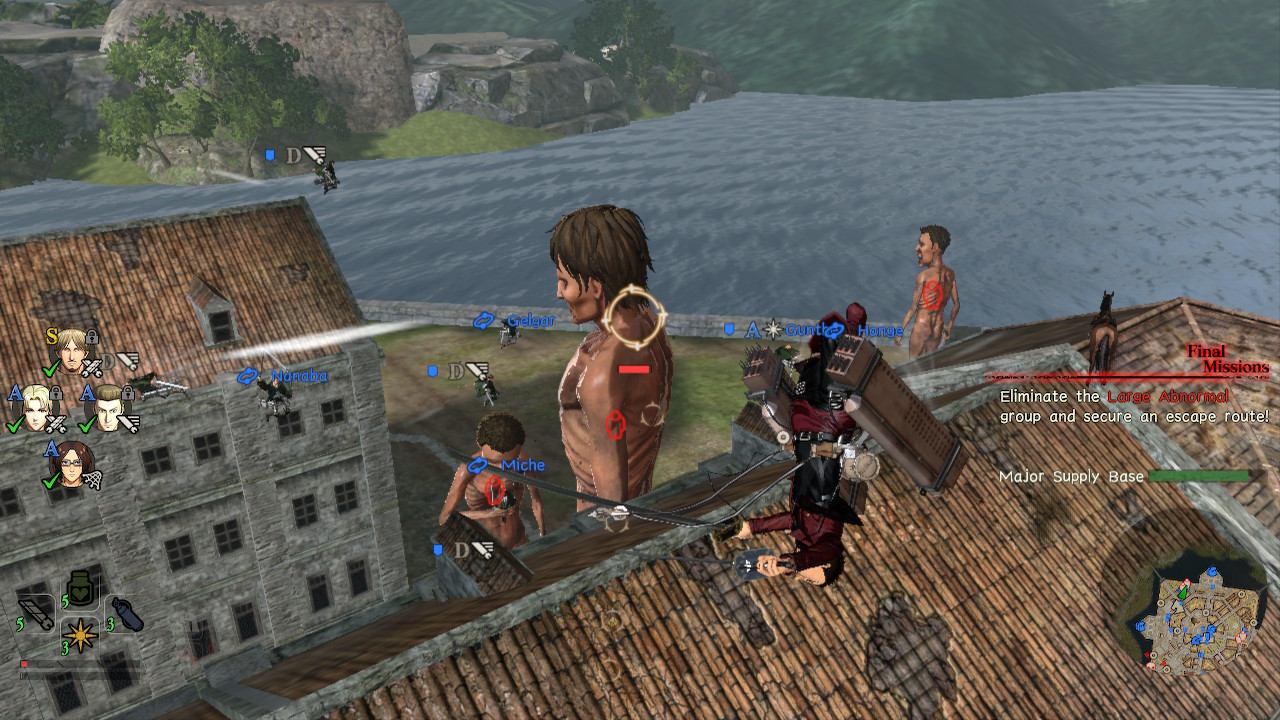 However, things are more than just plainly swinging around and slaying titans. The game places a good deal of emphasis on strategy as well. From recruiting and directing AI team mates, to strategic placing of bases, it is a game of brains as much as it is brawn. At times this may be a little overwhelming, especially as the controls continue to get complex as the game progresses, however, if you are able to master the strategic aspect while controlling your character’s high paced movements, the game is certainly yours for the taking. 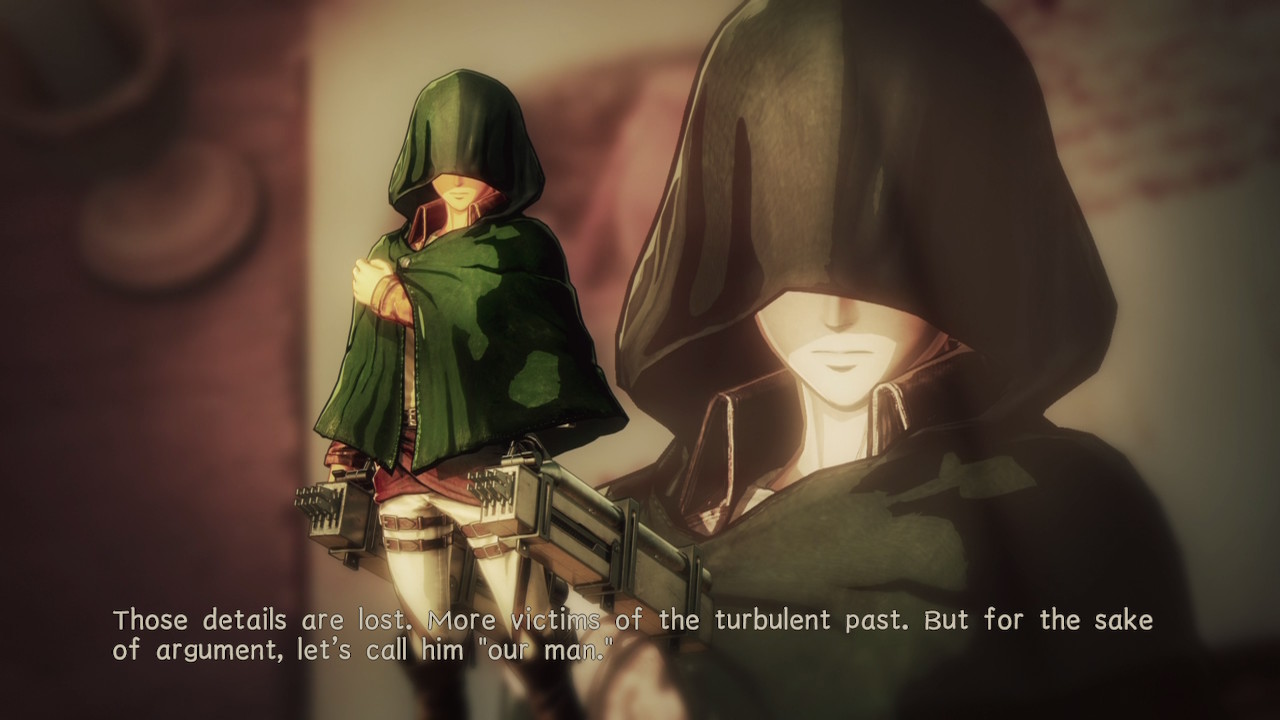 The opening cutscene had me fooled that the game was going to start from after the first game, which happened to also be where the first season of the anime ended. However, that is not the case. A great deal of the game (more than 70%) is a retelling of the first game’s story. If it is any consolation for those who have played the first game, this time the story gets told from your own perspective. While this may be welcomed by newcomers, it is hard to imagine that those who had played the first game might enjoy rewatching the same story again… from a different angle.

Right from the beginning, your character is retcon into the franchise’s story. Just like any good game with custom character creation, be prepared to spend a good deal of time tweaking your own characters. I was pleasantly surprised to see that the game even allowed you to tweak the colour of your character’s uniform. 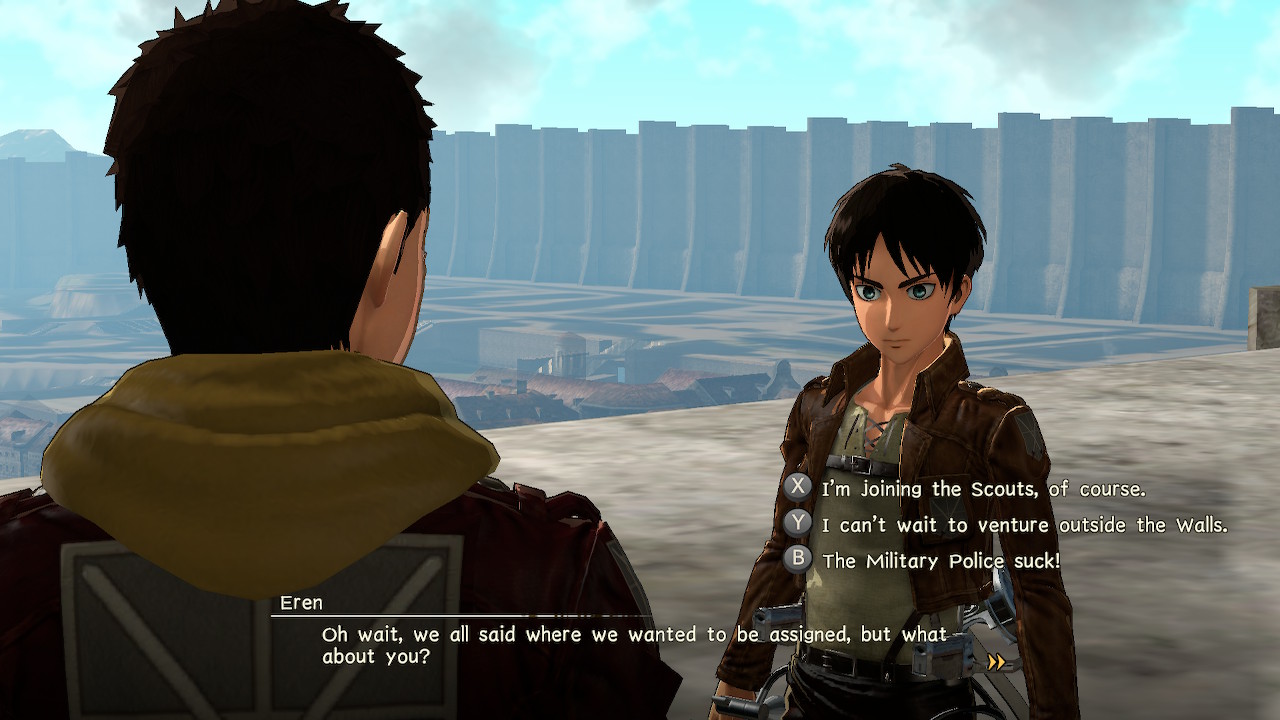 Although the game is largely linear, it still had a JRPG element of “choice” in it. To increase your immersion into the world, the game will, from time to time, seek your input into a scene. Characters will react differently to your choices, and your bonds with them might improve as a result of “correct” interaction.

While the main storyline might be action pack and interesting, the character side stories leave much to be desired. The simple character side stories were nothing more than just draggy events that did little to expand on a particular cast’s backstory. Making things worst, as your character stats are tied to the bonds he/she make with the rest of the cast, those side story “bonding sessions” are unavoidable however draggy they may be.

Despite all these, Omega Force still managed to keep as close as possible to the source material while keeping your character in the game. At the same time, praise have to be given to the developers for taking every opportunity in the game to accommodate to newcomers to the franchise, going so far to even put tidbits of information in the loading screens. 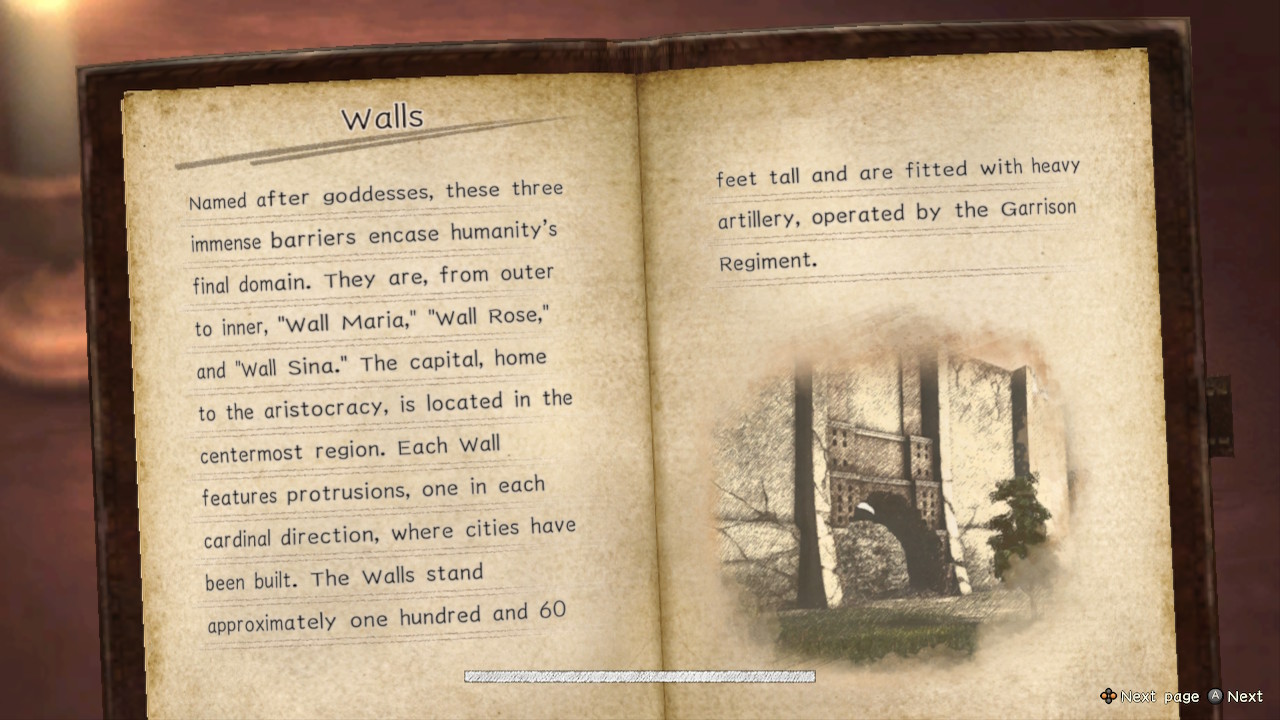 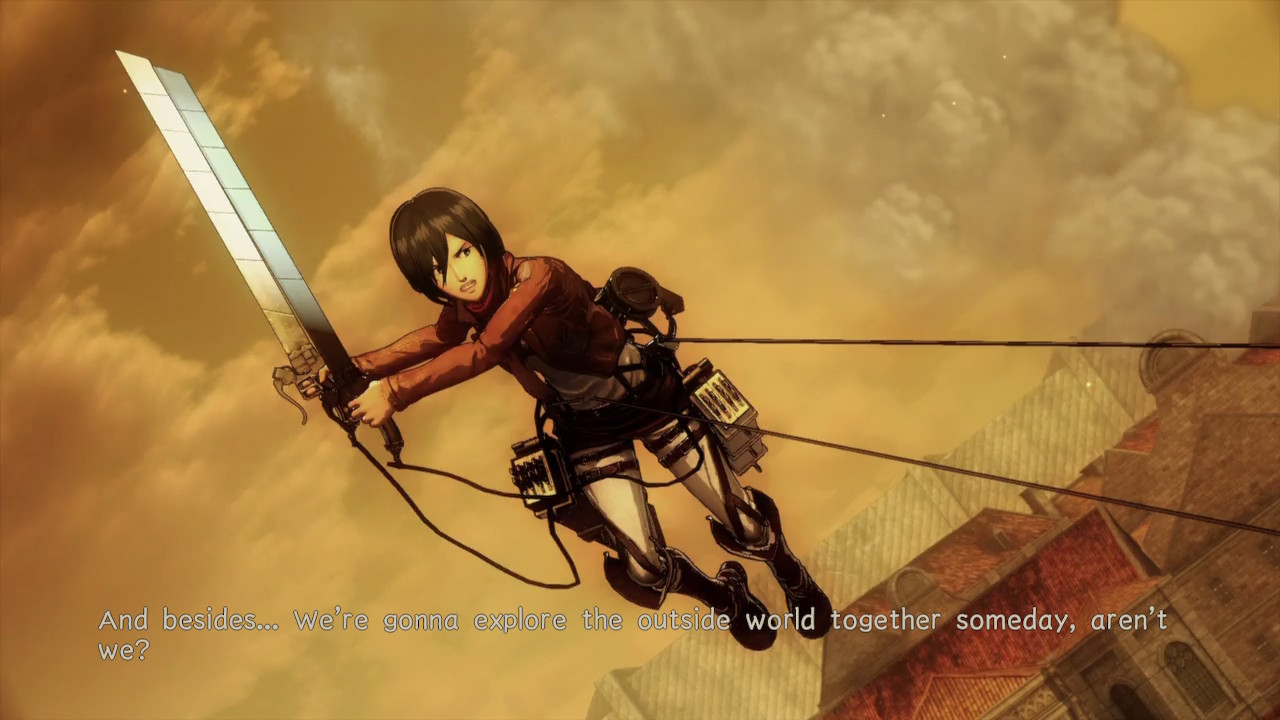 While I thoroughly enjoyed being able to play as my own customised character, the game understood that some of us might want to play as the other characters. You can do so in “Another Mode”, which also includes the online/local multiplayer functionality of the game. While I did not get to try the multiplayer game play, swinging around in another character seemed like a good novelty. 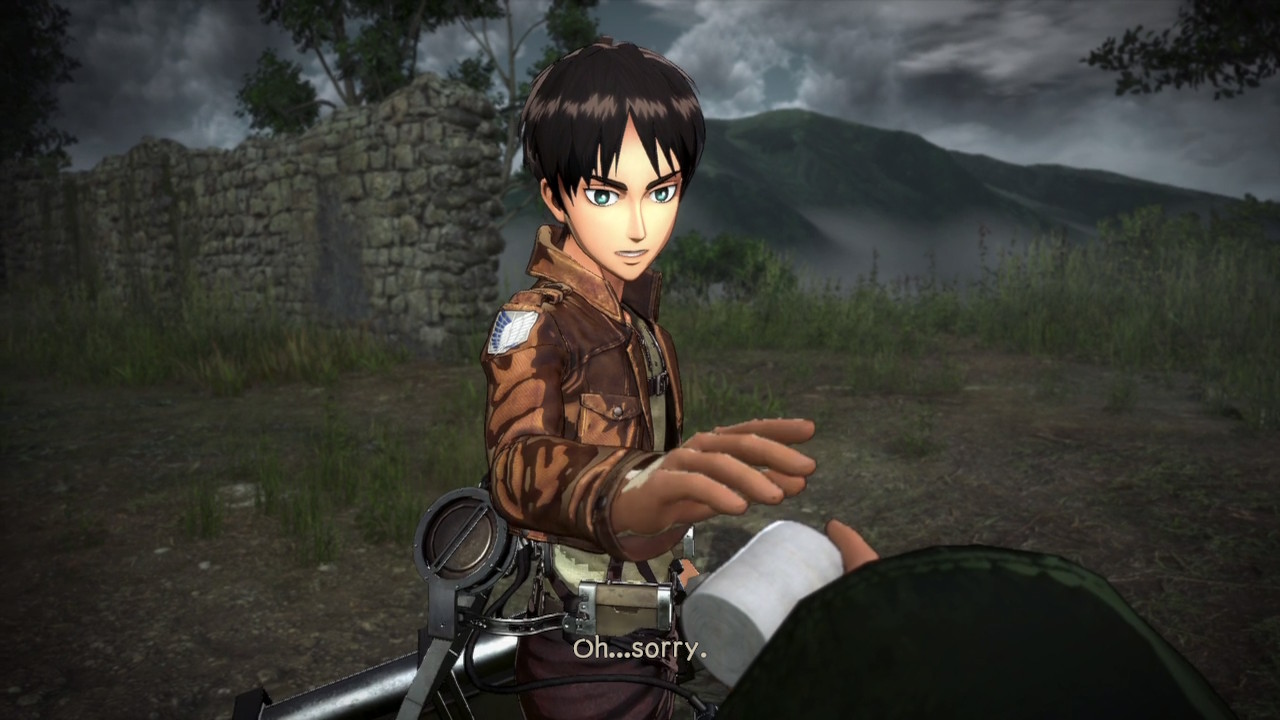 The graphics of the game is something that is worthy of praise, the 3D cutscenes were a fresh change from the 2D anime and the use of first-person point-of-view enhances the immersion of the game.

The game generally ran smoothly despite the action-packed fast pacing of the game. However, things may get a bit choppy when a huge clutter of titans congregate. Still, it is nothing exceptionally game breaking, just a mere hindrance.

The music in the game was also well composed, reflecting the grandiose and epic-ness the premise provides. It is also in line with the music commonly heard in the anime series. 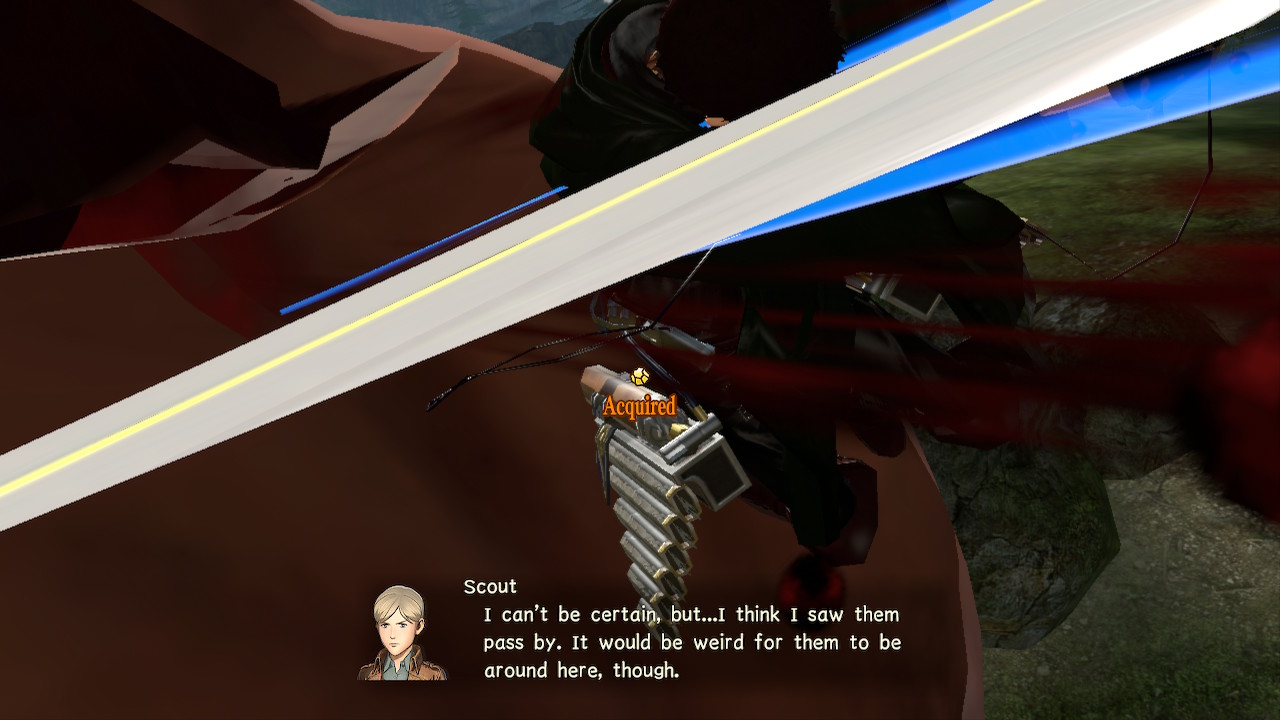 The voice acting in the game was also excellent, although I was quite disappointed that the localised version lacked an English dub. While I know that there are purists out there that scoff at the idea of a non-Japanese voiceover but when it comes to gameplay, I just can’t read three lines of subtitles, while simultaneously fighting a crowd of titans at the same time. 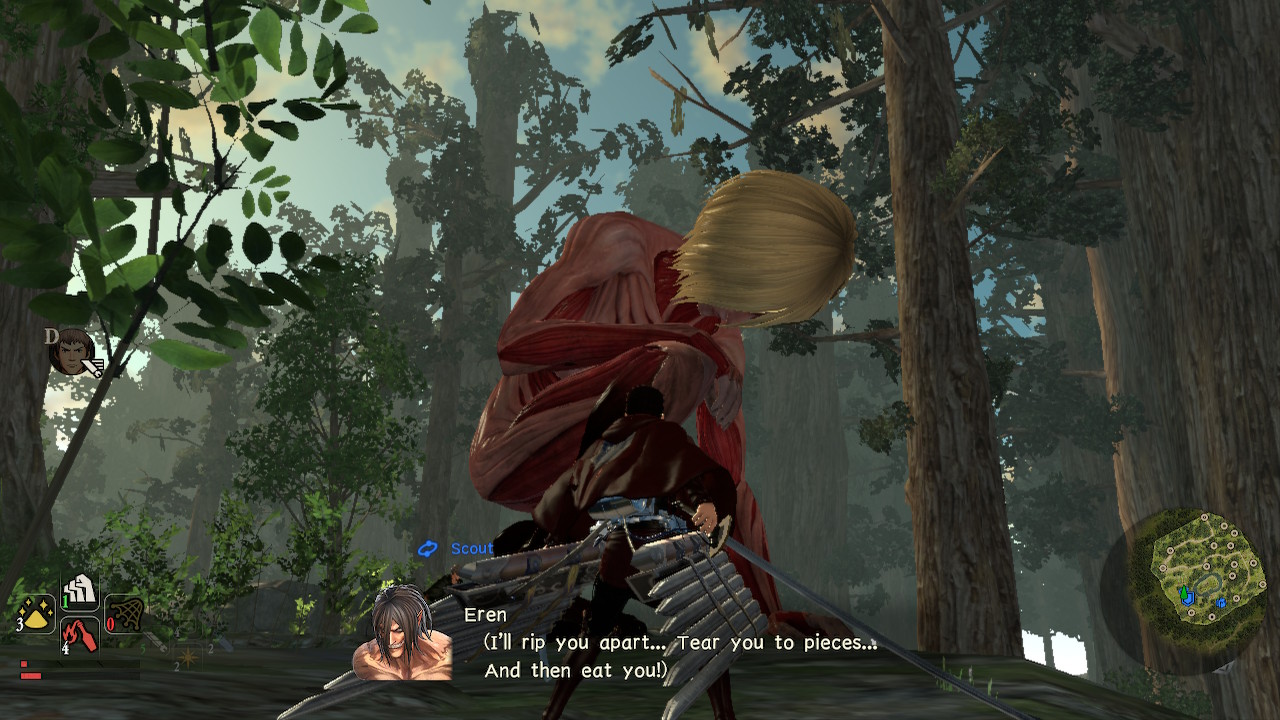 Attack on Titan 2, as funny as it may sound, is a game that newcomers to the franchise will enjoy best. It’s insistence on starting the story from scratch, albeit from another perspective, means that people new to the franchise will not have missed out on anything. Veterans, however, can still find enjoyment at the game’s new strategic elements, as well as, extended storyline. Overall, it is a game that can easily find its hands on anyone, and anyone can easily find enjoyment from it.

A review code for Attack On Titan 2 was provided by Koei Tecmo for the purpose of this review.