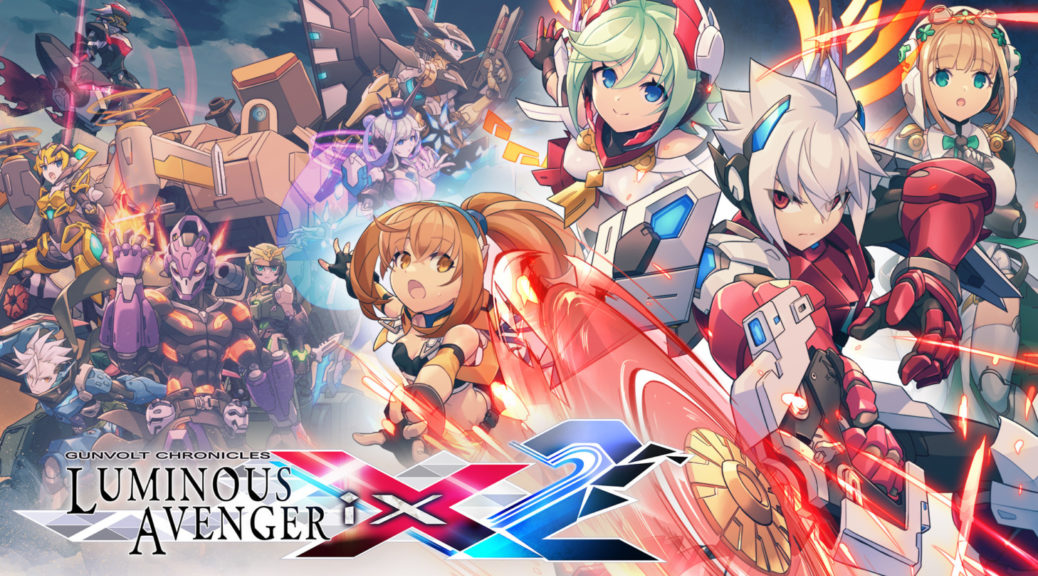 Inti Creates has come a long way since their Mega Man Zero days, having become somewhat of a household name in the action platformer scene. Their newest title, Gunvolt Chronicles: Luminous Avenger iX 2 is the studio’s latest foray into the genre, as well as a sequel to the 2019 spinoff entry in Inti Creates’ Gunvolt franchise. Let’s take a look at how it fares on the Nintendo Switch! 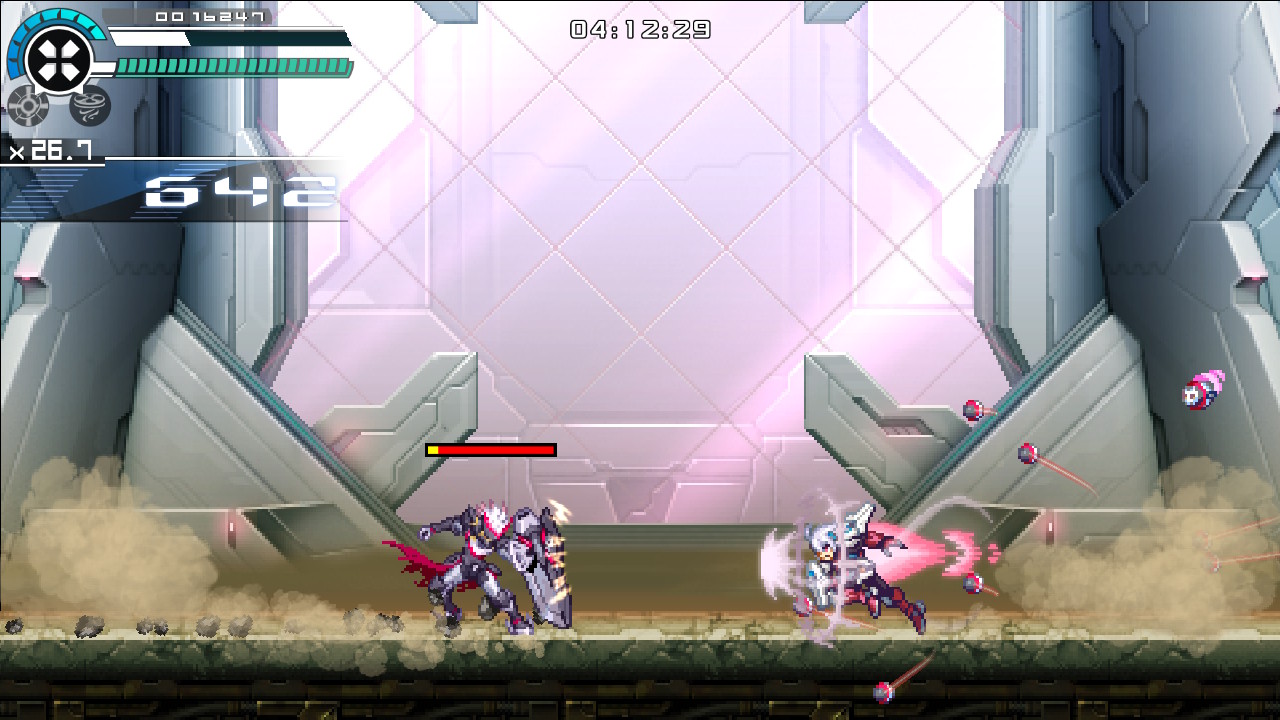 Gunvolt Chronicles: Luminous Avenger iX 2 takes place in an alternate timeline diverging from the main line Gunvolt series, and features the anti-hero Copen as the protagonist instead of the titular Gunvolt. After the events of the previous game, the world is finally at peace, and Copen has chosen to devote his time to his research. However, a wormhole suddenly appears and spirits him away to an unfamiliar desert world populated by mechanical beings called ‘Workers’. Together with his friends Lola and Kohaku, as well as a Worker girl named Null, Copen must ascend the giant tower ‘Grave Pillar’ to find a way home.

Evidently, the premise of Gunvolt Chronicles: Luminous Avenger iX 2 is a rather simple one, and without spoiling anything I’ll just say that it by and large plays out the way you’d expect it to. It’s not necessarily a bad thing as there are those – myself included – who appreciate a straightforward plot that doesn’t get in the way, especially in an action-oriented title like this one. That being said though, as someone who was pleasantly surprised by the strength of the previous game’s plot, I do have to admit that the narrative took a bit of a noticeable backseat this time. Nevertheless, I think Gunvolt Chronicles: Luminous Avenger iX 2 makes up for this by having a likeable cast of characters from start to finish, especially Copen who has mellowed out and isn’t as “edgy” as he usually is depicted in the Gunvolt series. 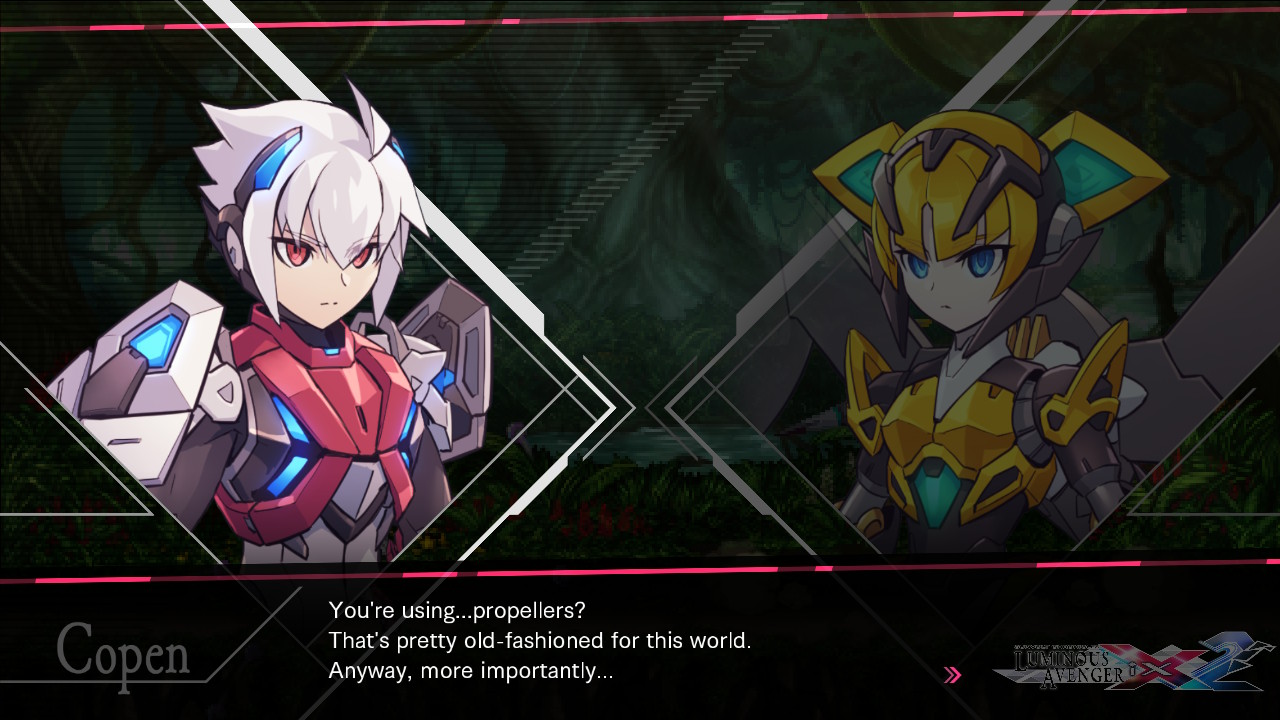 Moving on to the gameplay, Gunvolt Chronicles: Luminous Avenger iX 2 is a huge step-up from its predecessor in this regard. Copen’s playstyle has been significantly overhauled, forgoing the usual range from his blaster in past Gunvolt titles for a melee-focused combat style with the ‘Razor Wheel’ buzz saw. While fighting up-close might pose a bigger risk than before, Copen still has a couple of tricks up his sleeve to wipe the floor with his enemies. For one, Copen retains his signature ability to lock onto enemies by air-dashing into them, enabling him to release a barrage of homing ranged attacks. Defeating bosses also unlocks EX Weapons, which not only grant new ways to defeat foes but also help traverse previously inaccessible areas. This adds to the game’s replayability as your upgraded arsenal incentivises you to find new secrets in previous stages and clear them faster for a higher score. My only gripe would be how these new mechanics aren’t properly introduced to the player outside of optional conversations in the main hub area and checking the manual. Thankfully, none of them are that complex and can be easily learnt through some trial-and-error. Otherwise, I feel this iteration of Copen has the most satisfying gameplay of all Gunvolt protagonists thus far.

On a related note, some people avoid action platformers like the Gunvolt series due to the perceived difficulty of the genre. I, for one, remember how Inti Creates traumatised me during my younger years in Mega Man ZX with the hidden Omega boss fight. But jokes aside, Gunvolt Chronicles: Luminous Avenger iX 2 is definitely one of the more accessible action platformers out there. Copen’s robot companion, Lola, is now able to heal him to full-health with no cooldowns and only a slight modifier to the stage score. The optional ‘Hyper Guard’ upgrade also reduces all damage to 1 as long as Copen remains stationary. And if you somehow manage to die even after all of that, there is a chance for Lola’s ‘Anthem’ to kick in, which fully resurrects Copen and sends him into the powered-up ‘Overdrive’ state. The best part is that all of these features are toggleable, which means players seeking a challenge can opt to turn them off – an approach I think will satisfy both genre veterans and newcomers alike. 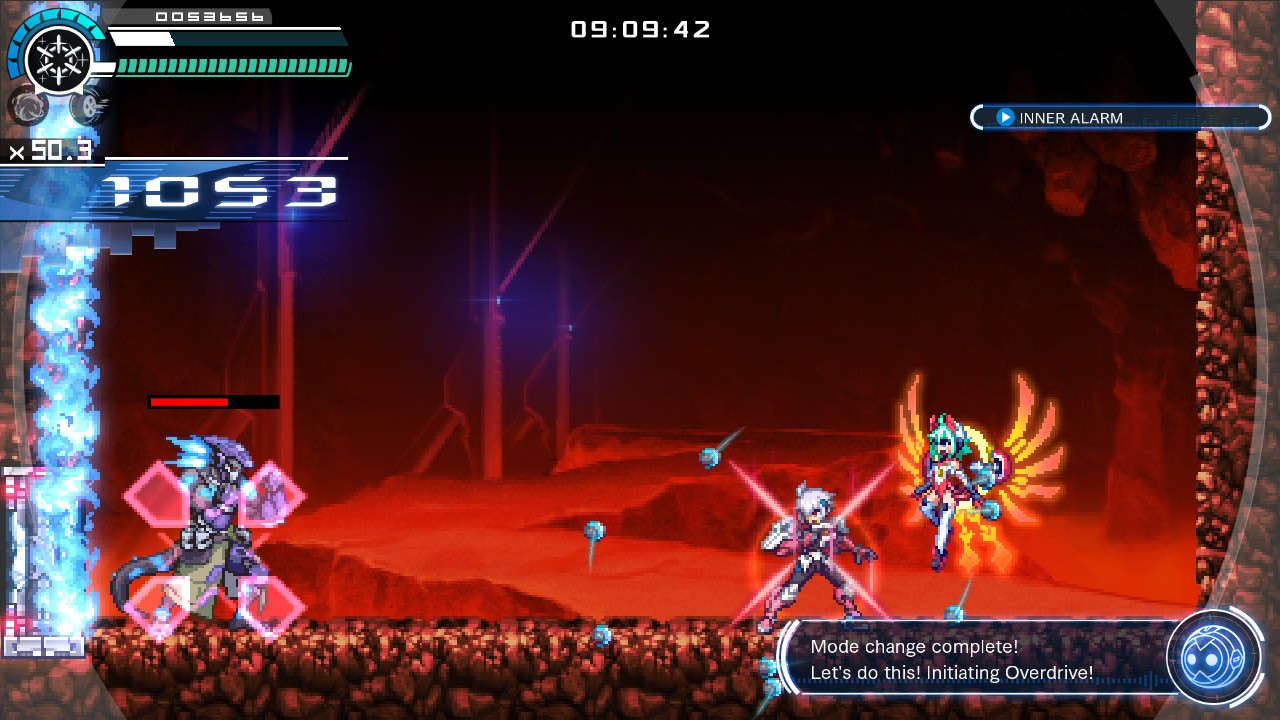 The presentation of Gunvolt Chronicles: Luminous Avenger iX 2 is another area deserving of mention. Inti Creates delivers yet again on their signature 2D pixel art for both the characters and the stage designs. And speaking of the latter, there is a wider variety of themes compared to the last game, ranging from futuristic ruins to forests and even a volcano! Another neat addition is the incorporation of Live2D art into the skill cut -ins, a welcome change considering how these cut-ins have remained very much the same throughout the Gunvolt series. All of these were complemented by the smooth 60 FPS performance throughout the entire game.

On the audio side of things, the stage and boss tracks are pretty serviceable and fitting for the sci-fi setting, but nothing beats the catchy Japanese idol songs that play when Copen enters Overdrive. Even as of writing this review, I find myself going over to the music gallery just to listen to them again! The sound design of each of the weapons, especially the Razor Wheel, is also really satisfying to hear when fighting enemies. Additionally, Gunvolt Chronicles: Luminous Avenger iX 2 adds English voices for the first time in the series, and despite the flak English dubs usually get I do have to say that I quite enjoyed the performance here, with many notable talents in the cast like Kira Buckland (2B from NieR), Cassandra Lee Morris (Morgana from Persona 5) and Connor Colquhoun (CDawgVA on YouTube).

With all the mostly good things I’ve said about Gunvolt Chronicles: Luminous Avenger iX 2, I do have to point out that this game is rather short which might disappoint those looking for a lengthier experience. There are a total of only 12 main stages (each of them can be cleared in a few minutes), and finishing them grants you access to 10 boss rematches and 1 boss rush. Where you’re expected to spend most of your time in is in replaying stages for a better score and currency to purchase upgrades, as well as finding hidden emblems to unlock a secret reward. I personally did not have a big issue with this and had a blast clearing past levels even more efficiently, but your mileage may vary here. While the game is priced appropriately to reflect this, I also still hope that Inti Creates has a few more surprises in store once they start releasing DLC. Having more reasons to dive into Gunvolt Chronicles: Luminous Avenger iX 2’s addictive gameplay is never a bad thing!

Don’t let its status as a Gunvolt spinoff fool you; Gunvolt Chronicles: Luminous Avenger iX 2 is a solid action platformer in its own right and a testament to Inti Creates’ proficiency in the genre. To me, the game’s amazing playability and presentation made up for whatever nitpicks I may have had on the plot and length, and I foresee myself sinking even more time into it especially once DLC are released. Whether you’re new to action platformers or an expert at them, Gunvolt Chronicles: Luminous Avenger iX 2 will definitely provide you with hours of entertainment and serve as a good appetiser till Azure Striker Gunvolt 3 comes out!

A review copy was provided by Inti Creates for the purposes of this review.