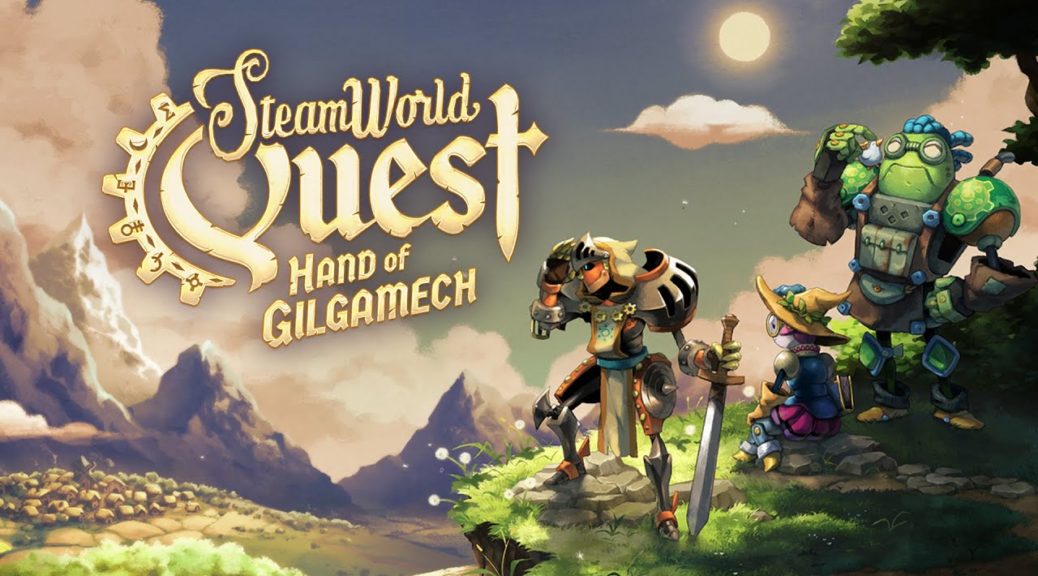 Image & Form have been creating SteamWorld games for the past decade. They have even expanded the franchise into various genres, introducing brand new gameplay experiences with each release.

There’s the tower defense game, the metroidvania platformer SteamWorld Dig and its sequel, and the XCOM-like turn-based strategy game SteamWorld Heist. All their works have been received exceptionally well; leading fans into thinking it’s high time the team delve themselves into making an RPG of their own. And, with the SteamWorld community’s constant urging, Image & Form finally heeded the call.

Enter, SteamWorld Quest: Hand of Gilgamech – Image & Form’s first attempt at a full-scale RPG, expanding the SteamWorld franchise and lore even further. And, boy, it sure looks absolutely gorgeous. 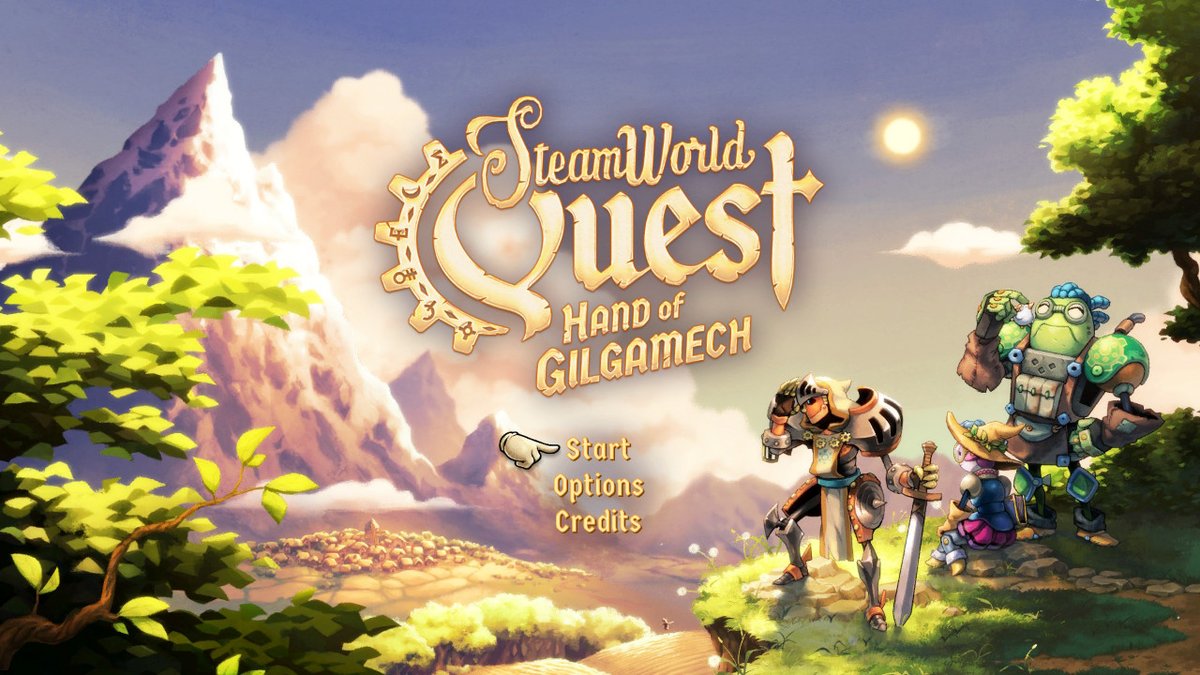 If you’ve played any of the past SteamWorld games, you know Image & Form specialize in eye-catchy hand-drawn visuals – SteamWorld’s signature art-style fans have always loved. However, this time around, the team have upped the ante with SteamWorld Quest, delivering a lush, vibrant, and remarkably detailed hand-drawn 2D world – all wrapped in a crisp and visually appealing presentation. The game looks really good whether playing in docked or in handheld mode.

That said, I’ve only been talking about the icing on the cake. It’s the narrative, gameplay, and all the RPG elements contained within that truly stands out. Image & Form absolutely outdid themselves once more. 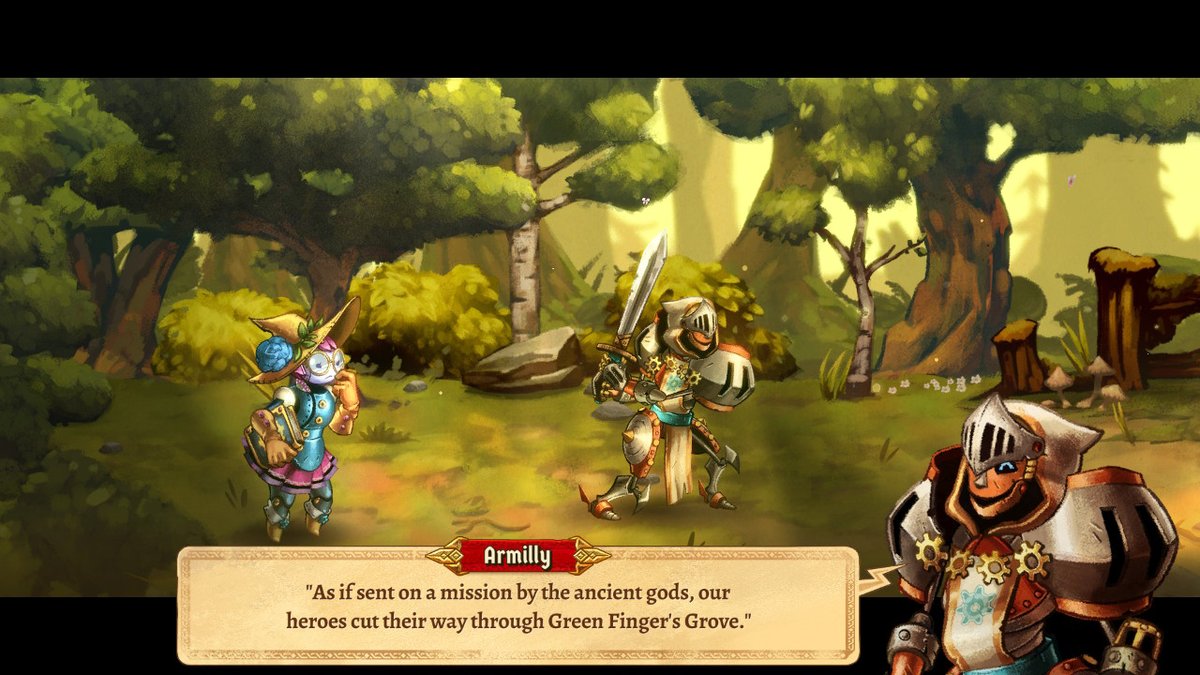 SteamWorld Quest is a tale set in a traditional fantasy but with SteamWorld’s signature comical steambots. You’ll encounter knights, alchemists, dragons, druids, and more mythical creatures. The story is told by a narrator, a nice touch by the way, across four story acts with each act having about five chapters, more or less. You get to control a group of aspiring young heroes who found themselves entangled in a series of misadventures while learning what true friendship and heroism really mean. Along the way, they’ll meet more companions joining them to aid in their quest. Eventually, they’ll find out about the twisted and sinister plans of a Dark Lord – a looming threat where the young heroes’ mettle is to be tested concluding in an epic final battle. 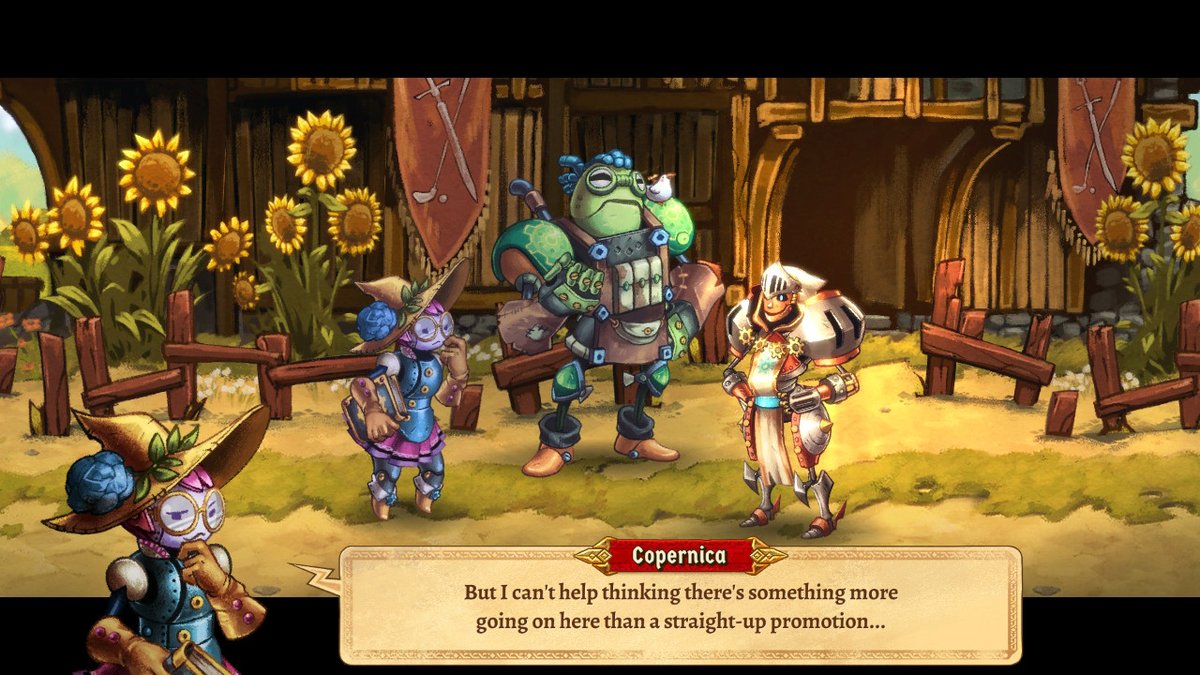 In terms of gameplay, SteamWorld Quest isn’t exactly heavy on exploration but you go “dungeon crawling” across various locations such as fields, forests, ruins, and caverns. However, they aren’t at all connected as you have to complete one chapter to proceed to the next, progressing the story further. Navigating the dungeons are somewhat straightforward but gets a bit cumbersome on later chapters. Each “room” in the “dungeon” may contain treasure chests, enemies, and blockades which gives some Gold, the game’s currency, when smashed. Enemies aren’t also randomly encountered. You can choose to engage or avoid them altogether. Battles against enemies also isn’t a walk in the park, provided you’re in regular difficulty. Oft times, battles are somewhat challenging especially if you don’t have the right cards in your deck. Fortunately, if you seem to be having a hard time, you can always change the game’s difficulty level before engaging the enemies. 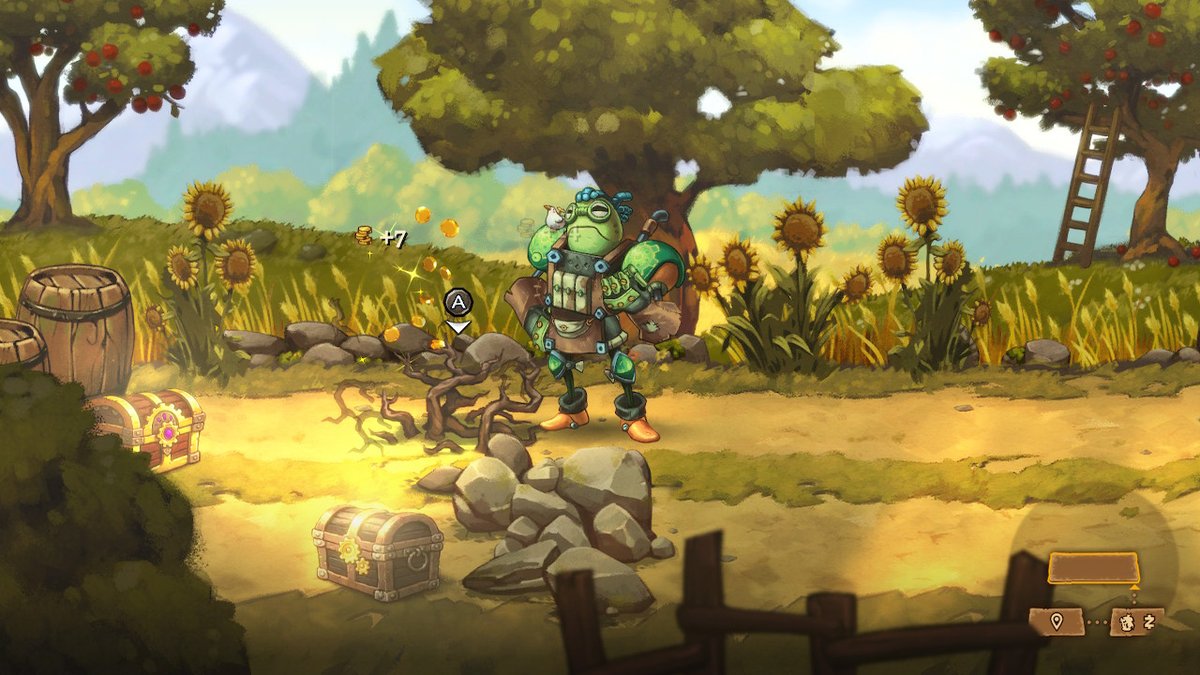 Speaking of cards, SteamWorld Quest’s turn-based battle system uses card-based mechanics. However, it should be noted that SteamWorld Quest is, first and foremost, an RPG which uses card-based mechanics rather than a card game with RPG elements. During battle, instead of straightforward actions of attacks and spells, players get to build and use a deck of up to 24 punch cards to deal out damage or initiate support spells. With each turn, the game lets the players choose and play three cards at most. Used cards are then reshuffled back to the deck, but is not discarded. You also get to buy or craft new cards and upgrade them to make them even more powerful.

The game also requires you to only have three active characters during battle with each character having eight active cards in possession. Cards also fall into three categories namely Strike, Upgrade, and Skill cards. Strike cards are your basic uncomplicated attacks while Upgrade cards act as temporary buff spells. Using these cards generates Steam Pressure (or SP). Meanwhile, in contrast with the Strike and Upgrade cards which can readily be used even without SP, there are the powerful Skill cards requiring a specific number of SP for them to be used. Building up and managing SP wisely is one core mechanic which a player must always put into mind while in battle especially during long boss fights. 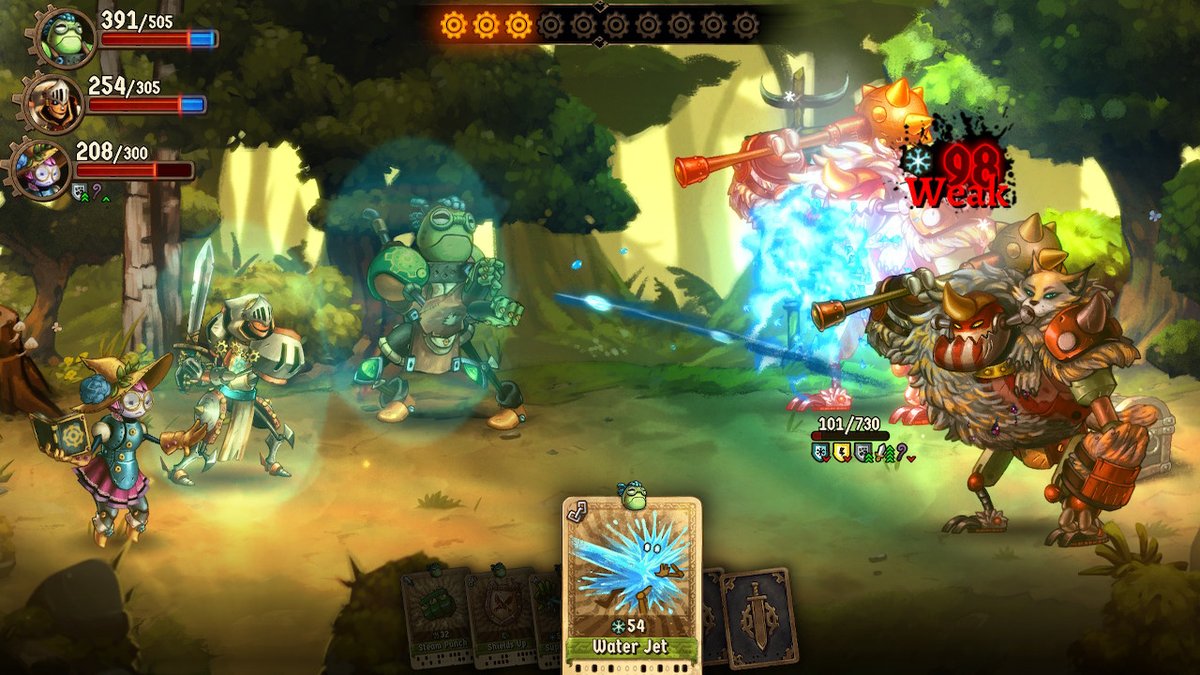 Further in the game, you’ll gain the ability to use Heroic Chains. Heroic Chains let you play a bonus chain card with an effect that depends on the weapon the hero has equipped. Heroic Chains happen when you play at least three cards from the same character, regardless of type, in the same turn. In addition, some cards are marked as Combo cards where you get an increased effect when played together with a card from another character. The battle-system mechanics might be a little bit daunting but I assure you the game will walk you through it. They will all be presented in just the right pace. You’ll soon get it naturally, and come to like it so much like I did. 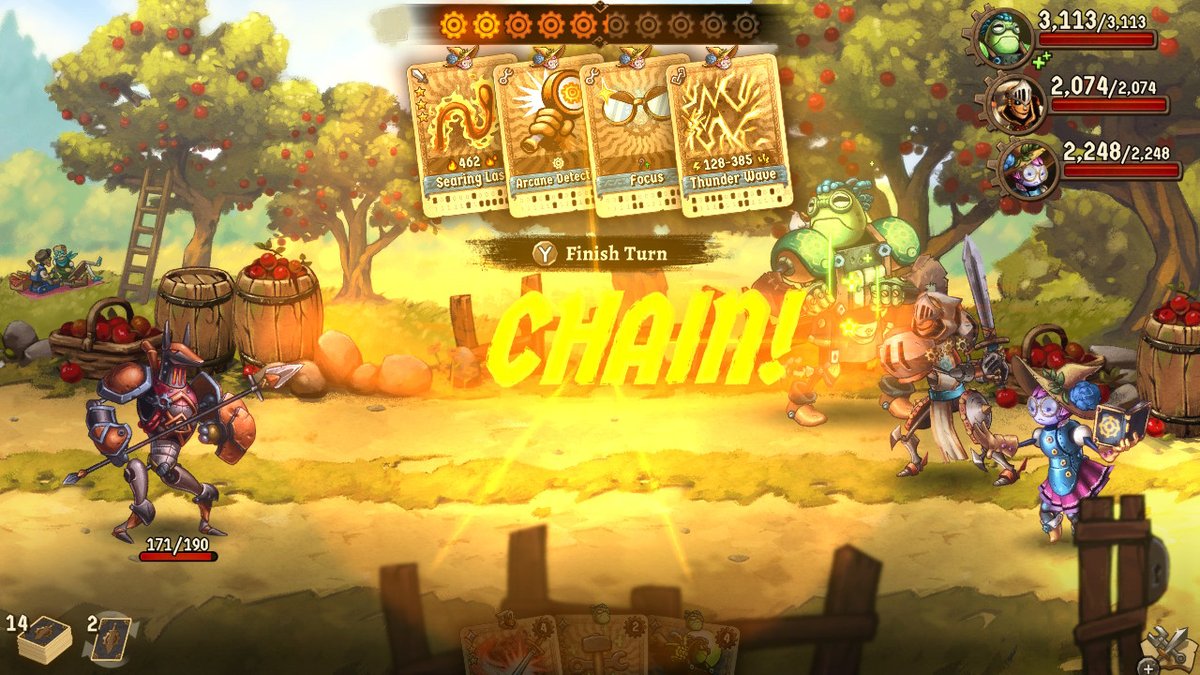 I have to admit, SteamWorld Quest also requires a good deal of grinding if you’re aiming to 100 percent complete the game. But what is an RPG without some form of grinding? Buying items, accessories, and weapons requires Gold, and some of the best equipment cost a ton. While Gold can be earned via winning battles or treasure chests, the game isn’t generous enough in giving you this precious resource. Additionally, Crafting and Upgrading cards require lots of materials which are dropped by the enemies. Fortunately, though, these materials can be bought from the shop, provided you have enough Gold. There is no workaround for this, it seems, thus, you have to earn it by going the classic RPG route – grinding. Though, I suggest doing this during post-game. 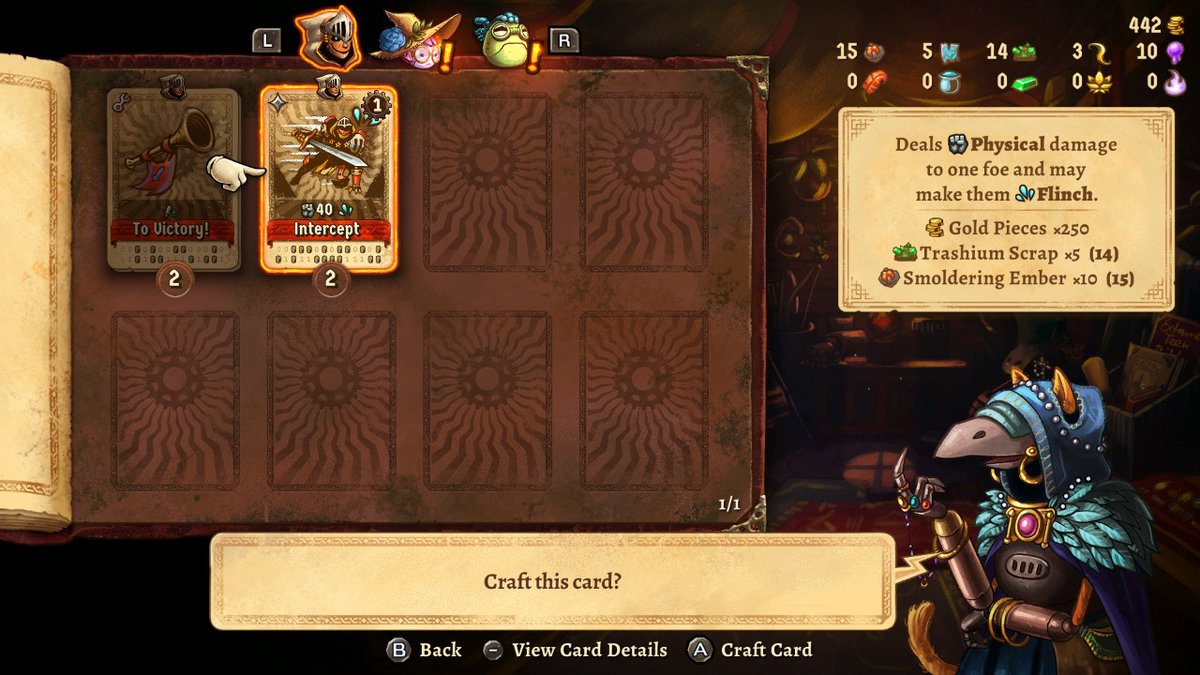 During the course of my playthrough, I managed to finish SteamWorld Quest in about 30 hours, including a bit of chapter re-treadings where I missed a couple of chests hidden inside some secret rooms. The boss battles are also especially challenging, and I have to commend Image & Form for that epic final boss fight! Some post-game content also gets unlocked by finishing the game once. There are still tons of things to do especially if you want to acquire all the cards or get the best equipment. 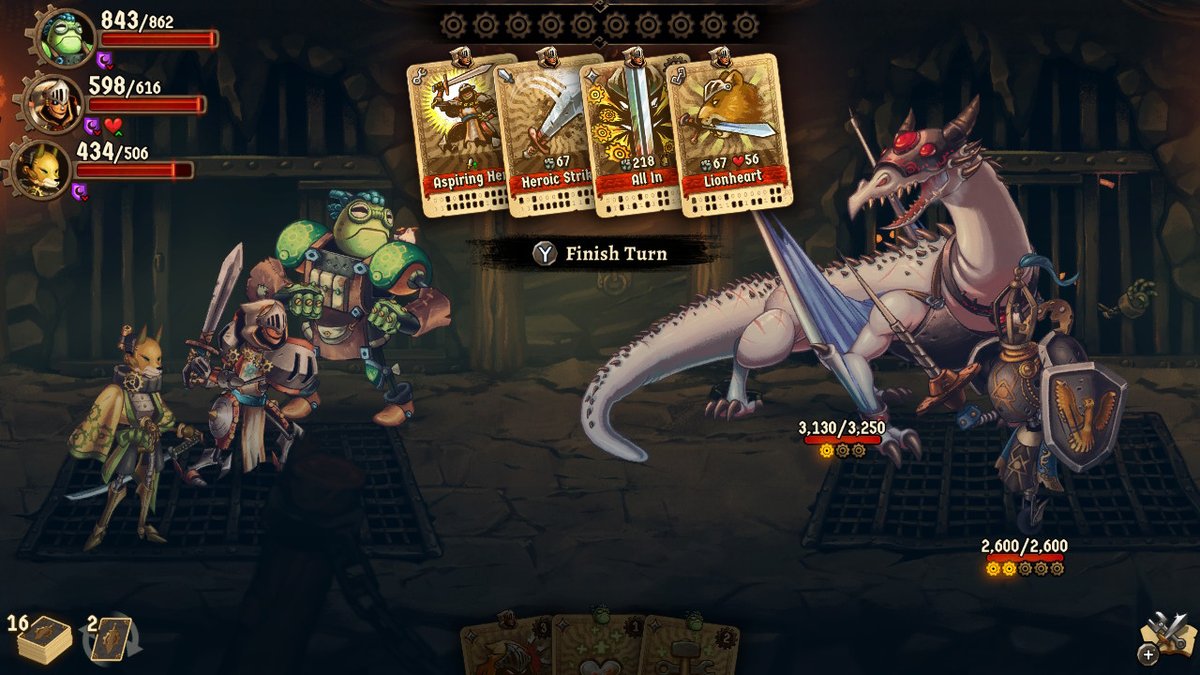 SteamWorld Quest: Hand of Gilgamech is essentially a narrative-driven game which comes equipped with all the elements of a satisfying turn-based RPG; even the background music is a great treat! While there have been a number of great RPG’s already out on Switch, there aren’t much that are actually brand new and gives a fresh experience, most are ports or re-releases. Now, here, Image & Form provided us a fresh, classic, enjoyable RPG experience complete with all the good stuff. Here’s a brand new RPG, next to Octopath Traveler, for the Nintendo Switch that has been finely crafted, magnificently presented, and with a battle system mechanic that has been truly well-thought out. It’s a solid turn-based RPG experience through and through.

A review copy was provided by the publisher for this review