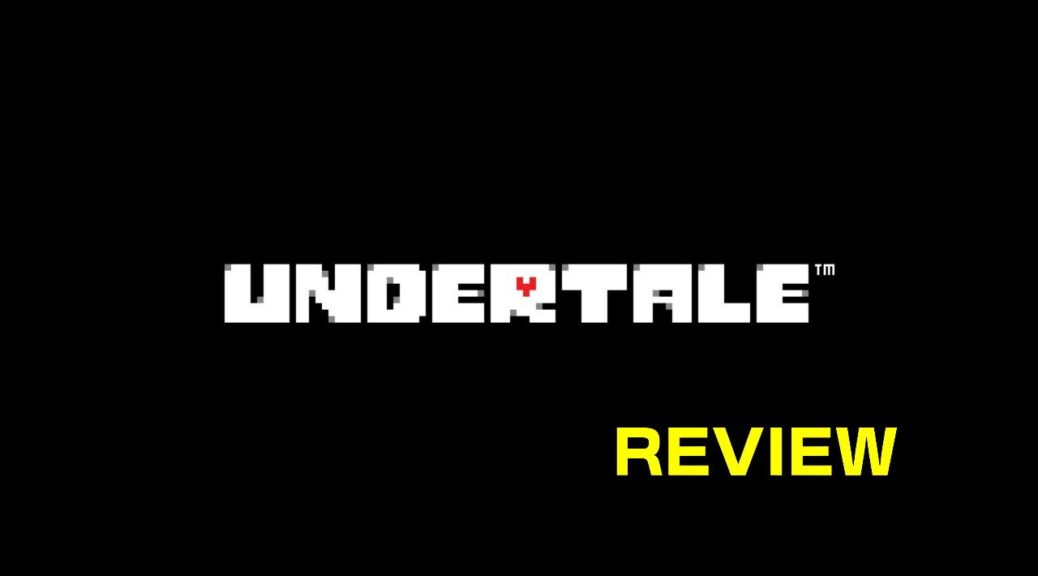 If you haven’t played Undertale yet, you should. And the Switch release might just be the best way to do so. 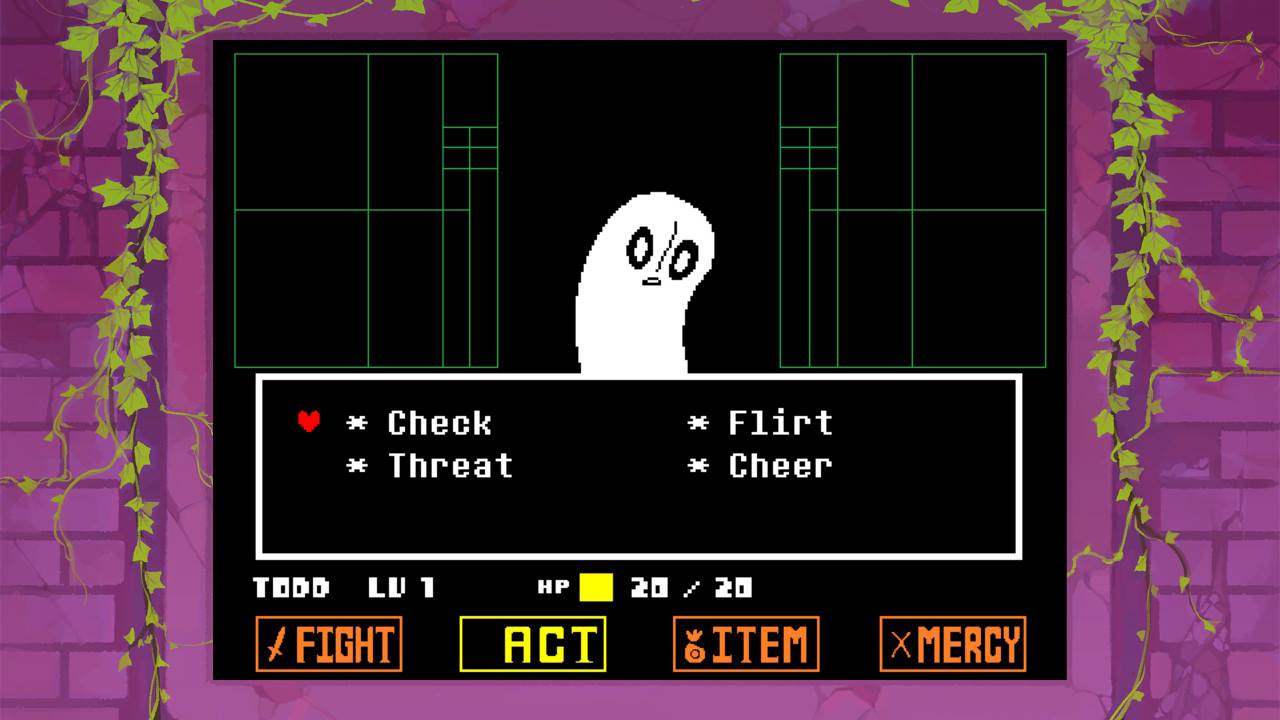 Undertale, an indie RPG by Toby Fox first released in 2015, tells the story of a genderless human child who has fallen into the Underground, the realm where all monsters have been locked away from the rest of the world. And at each step along the way, the player must decide how to interact with these monsters: will you fight, or try to find a way to resolve things peacefully? As you travel through a unique world with varied characters, each choice you make has major impacts on how the story plays out. 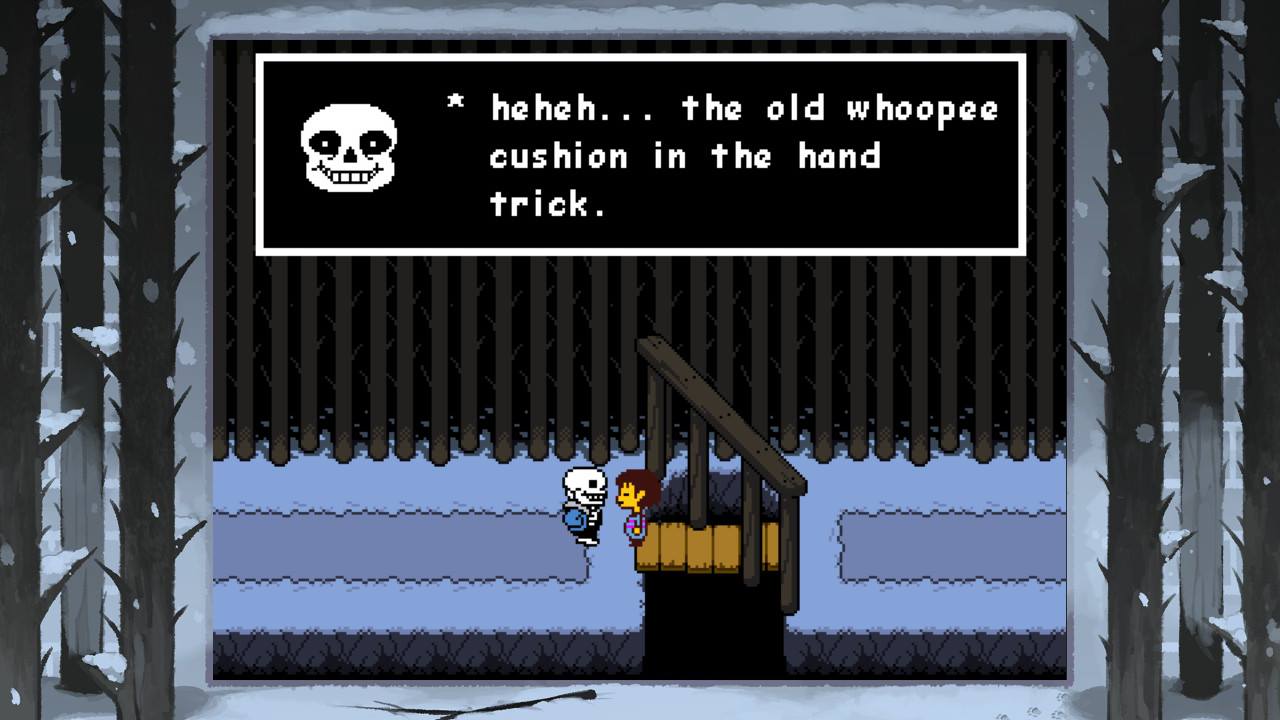 Undertale’s incredible story, characters, and world are the main reason the game achieved the massive popularity it has today. There was a war between humans and monsters long ago, and the humans won and sealed all of monsterkind underground. Ever since then, monsters have been longing to escape, but the only way they can break the barrier is with the use of human souls. However, a single human soul is strong enough to pass the barrier, and so the player character’s goal is to simply escape the Underground and return home. Along the way, they meet a wild assortment of characters, from the caring and protective Toriel to the goofy skeleton brothers Sans and Papyrus, and many others. Your first impression of each character will be challenged by new revelations and twists in the plot. Speaking of the plot, many of the game’s events can be wildly different depending on your choices. It’s highly recommended you play through the game without a guide, at least on your first playthrough. 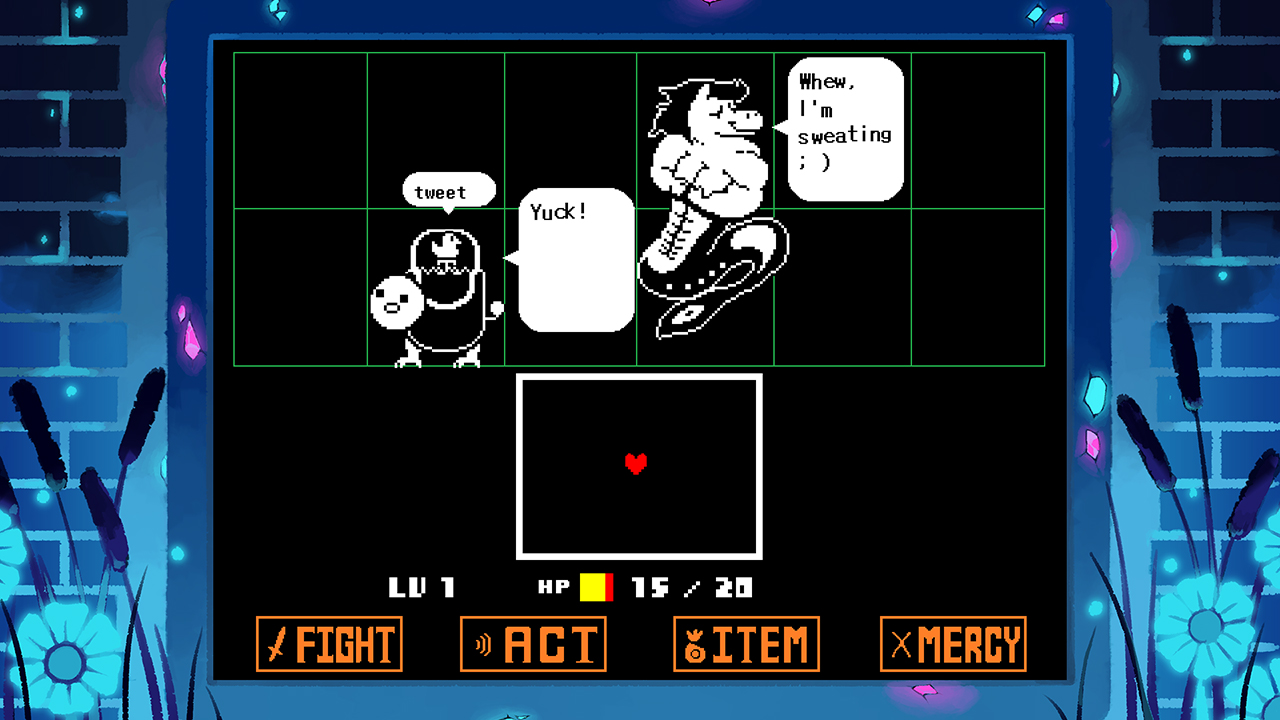 The game’s combat mechanics are clever and unique from any other RPG I’ve played. Enemy attacks are represented by magic bullets that fly across a field, where the player (represented by a heart) must dodge them to avoid taking damage. It’s difficult, but possible, to avoid taking any damage at all if you can evade all enemy attacks. The strength of player attacks are determined through a timing-based microgame. Both of these elements keep the battles engaging, rather than mindlessly mashing “A” to choose “Attack” from a menu.

If you don’t want to hurt monsters, you can interact with enemies using the “ACT” menu, which provides you with different choices for each monster. For example, you can either THREATEN or COMPLIMENT a Froggit (the first monster you meet). When certain conditions have been met—this can be lowering the monster’s HP, choosing the correct action(s) from the ACT menu, or simply enduring long enough—the monster’s name will turn yellow and you have the option to SPARE them, ending the battle peacefully. Further variety is added to the battle system through special “transformations” that occur during some boss fights. These transformations radically change the way you avoid enemy attacks. 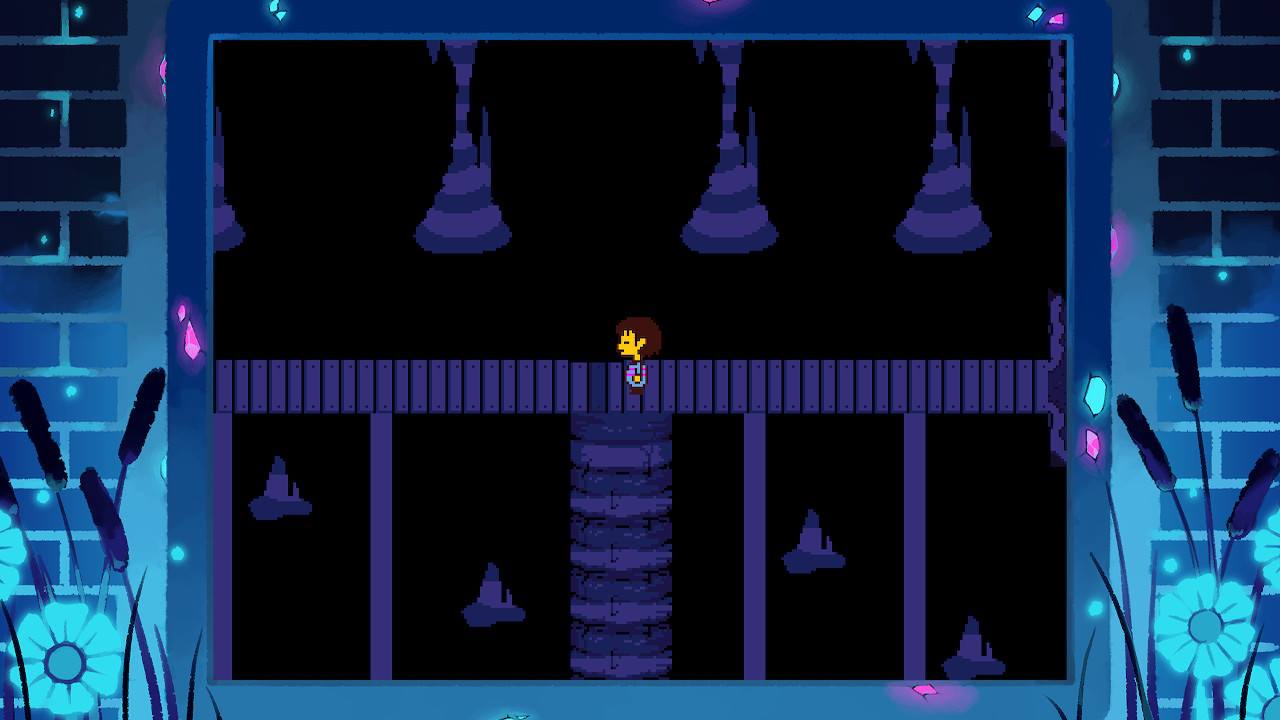 If I had one minor critique of the battle system, it’s that peaceful resolution of battles can rely a little too much on trial-and-error. Hints are provided by flavor text, in-battle dialogue, or even just using a turn to “EXAMINE” an enemy, but ultimately it’s not always clear what action is required to SPARE an enemy. Once you know the “trick” to each monster, though, repeat encounters get a lot easier.

The game is scored by a fantastic soundtrack with some emotionally impactful themes and motifs, and plenty of badass battle music. The soundtrack fits perfectly at each moment a new song plays, and you might find yourself looking up musical tracks from the game long after finishing the game. Visually, the game is distinct, but uneven. The simplistic sprites of the overworld get the job done, while the black-and-white battles are iconic and memorable. 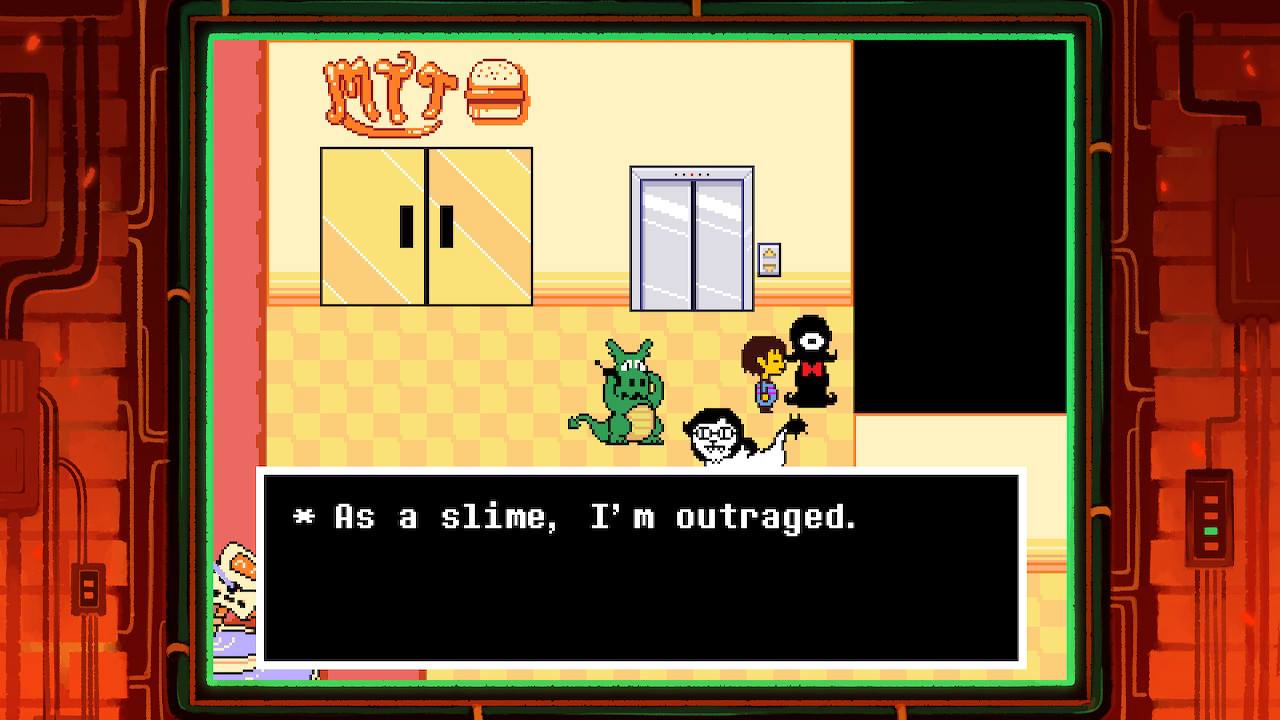 The Switch port of the game is, as far as I can tell, flawless. With a game that’s this technically undemanding, it should be expected, but it’s good to know the game runs perfectly. To preserve the game’s original graphics, the game runs in a box. You can enable borders (seen in the screenshots in this review) or just leave the blank space black.

The Switch version also has a bit of extra content. The main (only) addition is a battle with a new enemy, which becomes accessible when you’re near the end of the game. The encounter adds a new transformation, and is a really nice treat for Switch players. Depending on how much you love Undertale, this might be a reason to pick up the Switch port. For reasons that will become obvious when you discover the new fight, it’s likely to remain exclusive to the Switch release.

Undertale is a masterpiece of an indie RPG that challenges every convention of the genre to great effect. The soundtrack and writing combined with the ability to resolve fights nonviolently give the game a deep emotional core that you wouldn’t expect from its simplistic graphics. The clever and often hilarious writing will keep you engaged from start to finish. Undertale is something that every gamer should experience.

Soup Verdict:  The taste of this exquisite soup fills you with determination.

A code was provided by the publisher for the purpose of this review.