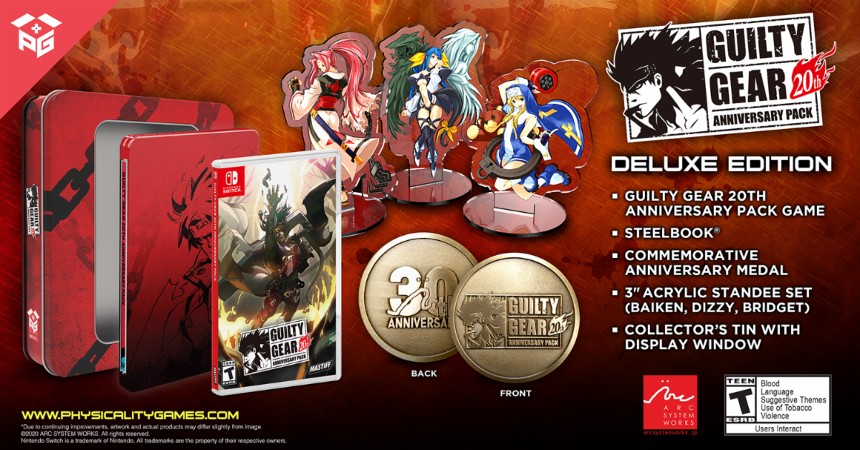 It looks like North American collectors will soon be able to add a matching copy of Guilty Gear 20th Anniversary Pack to their shelves!

[Pre-orders for this physical edition have been cancelled indefinitely, as of 13 November 2020. Read more about it over here.]

Publisher Physicality Games has confirmed that it will be releasing a North American physical version of the fighting game bundle for Nintendo Switch – which previously launched physically in Asia and Europe only. This US release will come with unique extras, however – such as a Steelbook, acrylic standees, and more!

Pre-orders for both versions will go live on 23 March 2020, according to the publisher. We’ll report back when we hear more.

In the meantime, check out more details from the press release below:

The original Guilty Gear and GUILTY GEAR XX ACCENT CORE PLUS R are brought together in one epic physical package on Nintendo Switch!

Guilty Gear made huge waves within the fighting game community when it was released in 1998. The game’s spectacular special moves, innovative mechanics, unique characters, game-defining hard rock soundtrack, and anime-infused story brought the fighting game genre to new, unparalleled heights. All of these elements fused together for an incredibly complex and epic fighting game that has been entertaining and fascinating fans for over 20 years!

First released in 2008 in Japan, GUILTY GEAR XX ACCENT CORE PLUS R is the final installment and epitome of the Guilty Gear XX series that refined everything introduced in the 12 previous installments to reach a perfectly balanced game. Mechanics like the universal overhead attack “Dust” as well as “Roman Cancel,” which allows players to cancel all kinds of actions and therefore increases their options dramatically, set the bar for the series’ sequel: Guilty Gear Xrd.