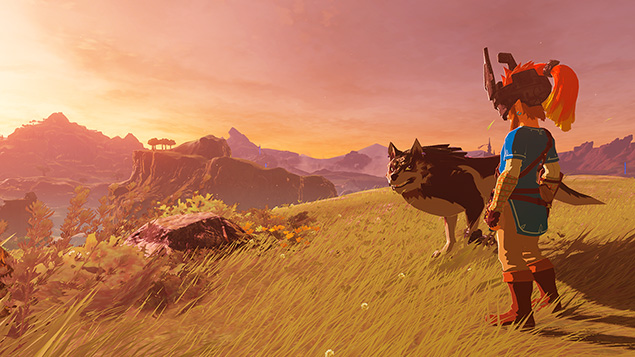 One of The Legend of Zelda: Breath of the Wild DLC Pack 1’s exclusive items is Midna’s Helmet, which can be found inside a chest hidden somewhere in Hyrule.

In Nintendo’s latest blog post for DLC Pack 1 (which launches on June 30), they revealed equipping Midna’s Helmet will provide Link with “Guardian Resist Up” for defense, reducing the damage Link takes from Guardians. Nintendo also recommends players to use Midna’s Helmet when exploring the world with Wolf Link, which can be summoned by tapping the Wolf Link amiibo. 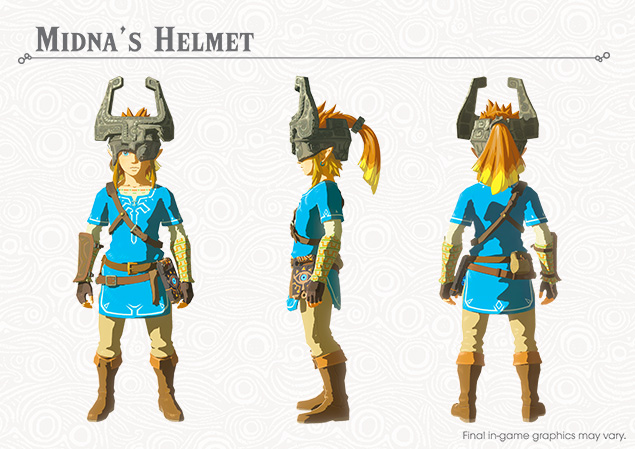 The same blog post also shares more details about Midna, which you can take a look below.

Hello. I’m Takizawa, Art Director of The Legend of Zelda™: Breath of the Wild.

In DLC Pack 1: The Master Trials, players can find Midna’s Helmet in one of the chests hidden in the world (this DLC is only available through the purchase of the Expansion Pass).

Creating a “buddy” character who would stay next to Link at all times and battle in tandem with him was a first for a Legend of Zelda game. The challenge started with brainstorming among designers for ideas, and we eventually finalized this character through a trial-and-error process for her shape, facial expressions, actions, etc.

In early prototypes, as a placeholder for Midna, Tetra from The Legend of Zelda: The Wind Waker was riding on Wolf Link as he ran around Hyrule.

There was a secret project we were considering working on before The Legend of Zelda: Twilight Princess for Wii, and Midna inherited the character profile for the “goblin/devilkin” character that would have been featured in that project. Looking back at the development notes from that time, there are some descriptions left on the notes clearly reminiscent of Midna, including “the appearance looks like a monster or a child,” “can’t tell if she’s enemy or ally,” “can’t really tell what she’s thinking,” “sometimes selfish, but sometimes cute and naïve.” That’s why initial design sketches for Midna looked a lot like this “goblin” character.

The actual Midna’s Helmet was the physical manifestation of extremely powerful shadow magic passed onto the royal family of an alternate world, but when Link equips it in the Legend of Zelda: Breath of the Wild game, it will add “Guardian Resist Up” to Link’s defense. This will give Link more armor options when facing Guardians, so I hope you will utilize it well. My recommendation is to use this Helmet while exploring the world with Wolf Link!

Tomorrow, Ms. Shirakawa who worked on the game design will passionately talk about the outfit of 35-year-old man who wanted to be a fairy.