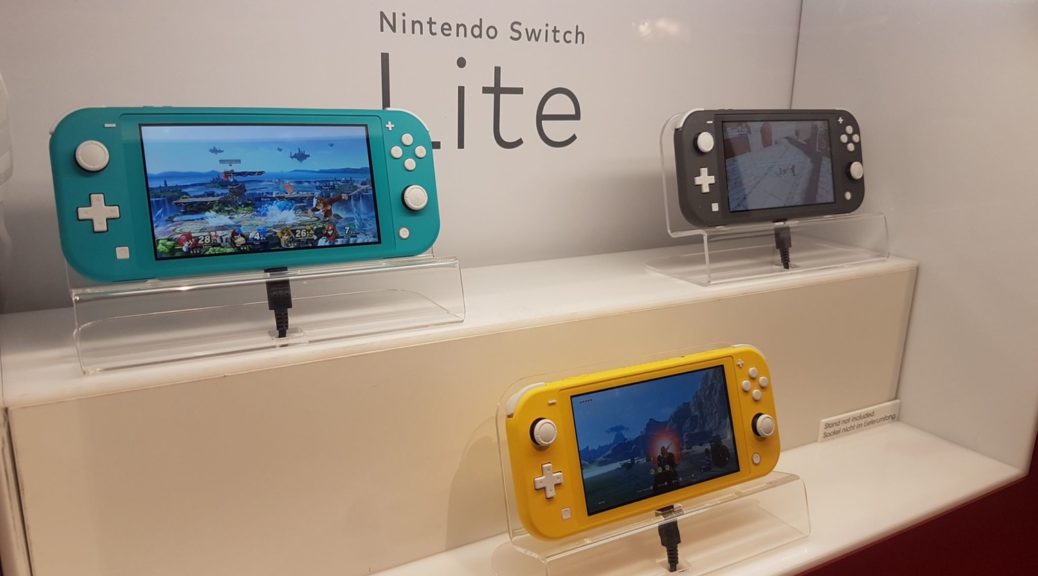 Last month, our German correspondent Manuel visited Gamescom to try out upcoming games coming to Nintendo Switch later this year and beyond.

Check out what he has to say about these games below:

The first booth I “conquered” was the Nintendo booth in the business area. Nintendo of Europe had one of the biggest there and it was full with great demos. 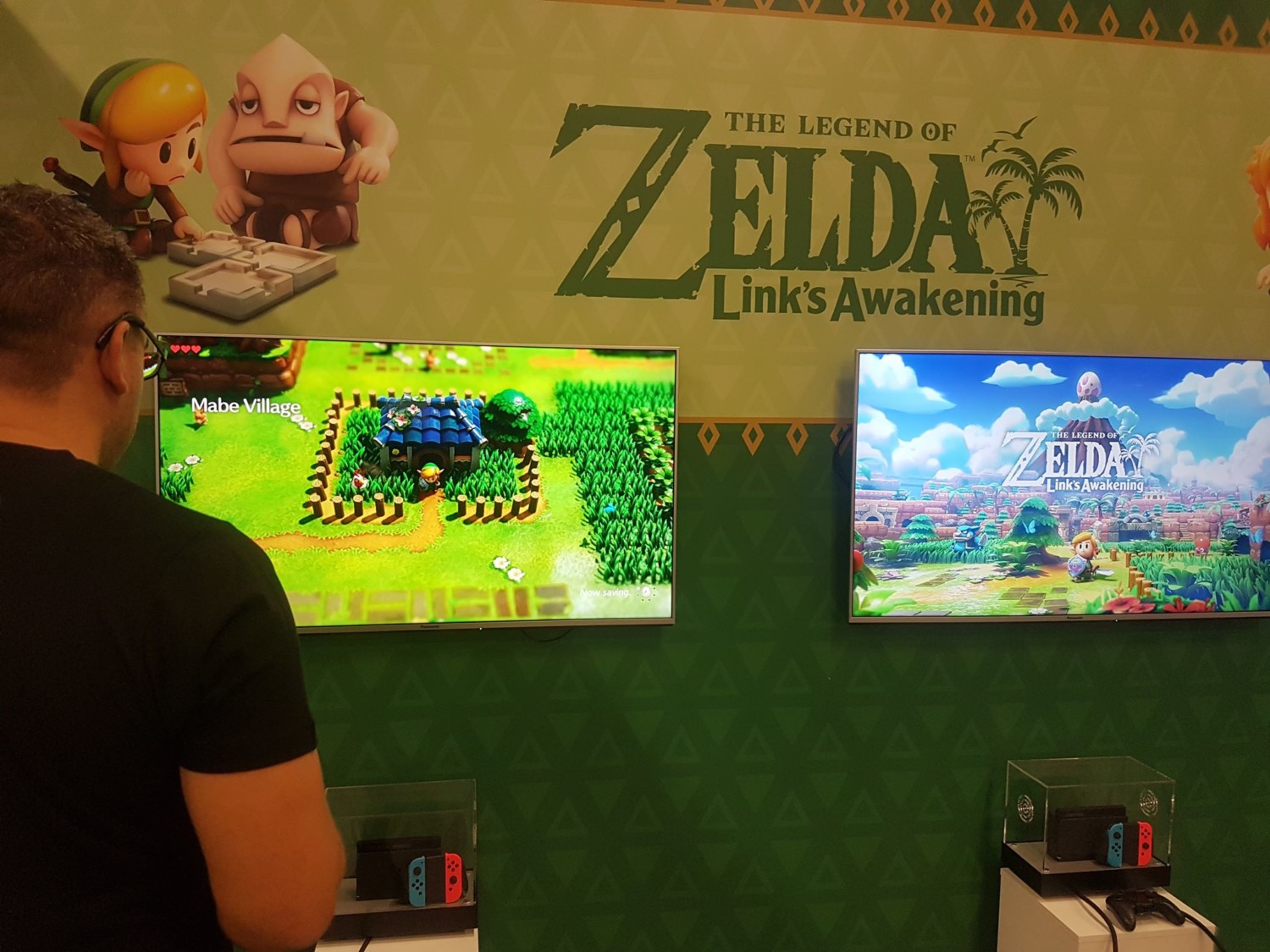 I could play the demo from the beginning to the task of the witch: “Collect the mushroom!”. Yes, and it was incredible as the original! The graphics are superb and it sounds and feels like another Zelda masterpiece you will remember for decades. Nintendo has done an awesome job in remaking the great Game Boy original! I think everyone who has only got in touch with videogames should buy this game. No doubt.

Next demo: WHAT THE GOLF? 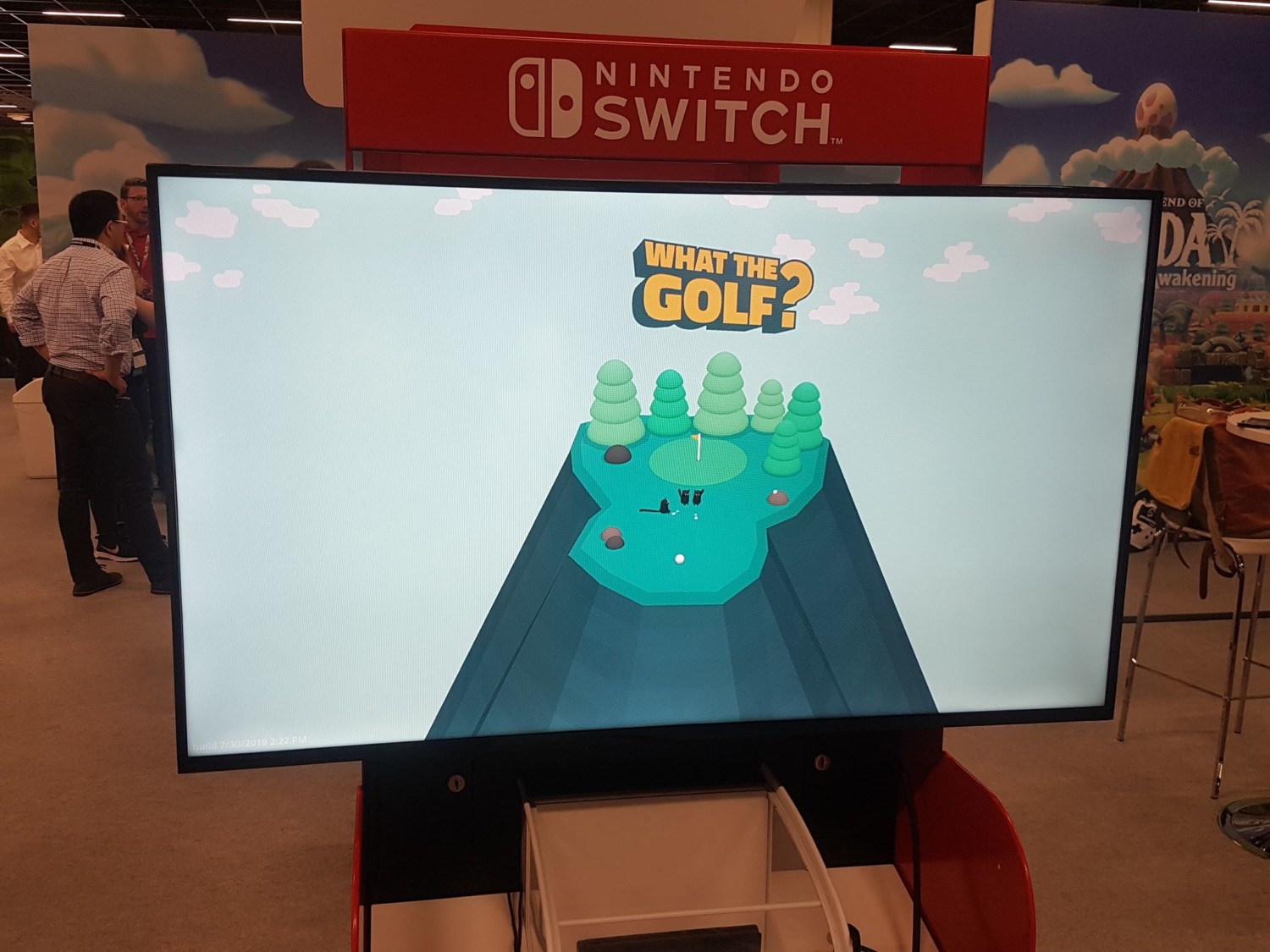 When I played Zelda, I heard people laughing… and laughing… and they didn’t stop. So I went to the demo station where Nintendo showed the Indies and what did I see? A really strange golf game! But… you could play with everything except the golf ball. The Nintendo employee told me: “You have to try this one, it’s our insider’s tip here.” And I did it! First I thought… “what the…”, because it was so easy to play and you had only the goal to get anything into the hole, yes, except the ball. You could throw the golf playing guy, the golf club, a house (!)… and it got stranger and stranger! Then you had to play soccer, drive by car, fly through the air, and so on… And it was so entertaining and I started laughing like the guys before me! “WHAT THE GOLF?” has and incredible “trash factor”, but it is incredible funny and creative. A perfect party game! Nintendo has released a new trailer too! Check it out!

Third one: The Touryst

Shin’en from Germany, the guys behind the stunning “FAST RMX”, showed their next outstanding game – “The Touryst”. You play a tourist finding yourself on an island and you have to find the way out of the island to get to the next one called “Ibiza” (in the demo). The graphic design seemed to be inspired by LEGO or Minecraft. And I enjoyed the tropical feeling of the demo, it reminded me of Super Mario Sunshine f.e.! The game is an adventure with lots of quests and and puzzles to solve. So, it’s the opposite of “FAST RMX”, this one is now a very slow and relaxing game. I hope Shin’en can go on with the good work they showed us in the demo. The game could be the next “big thing” of the German magicians!

The Mechs got me: Daemon X Machina 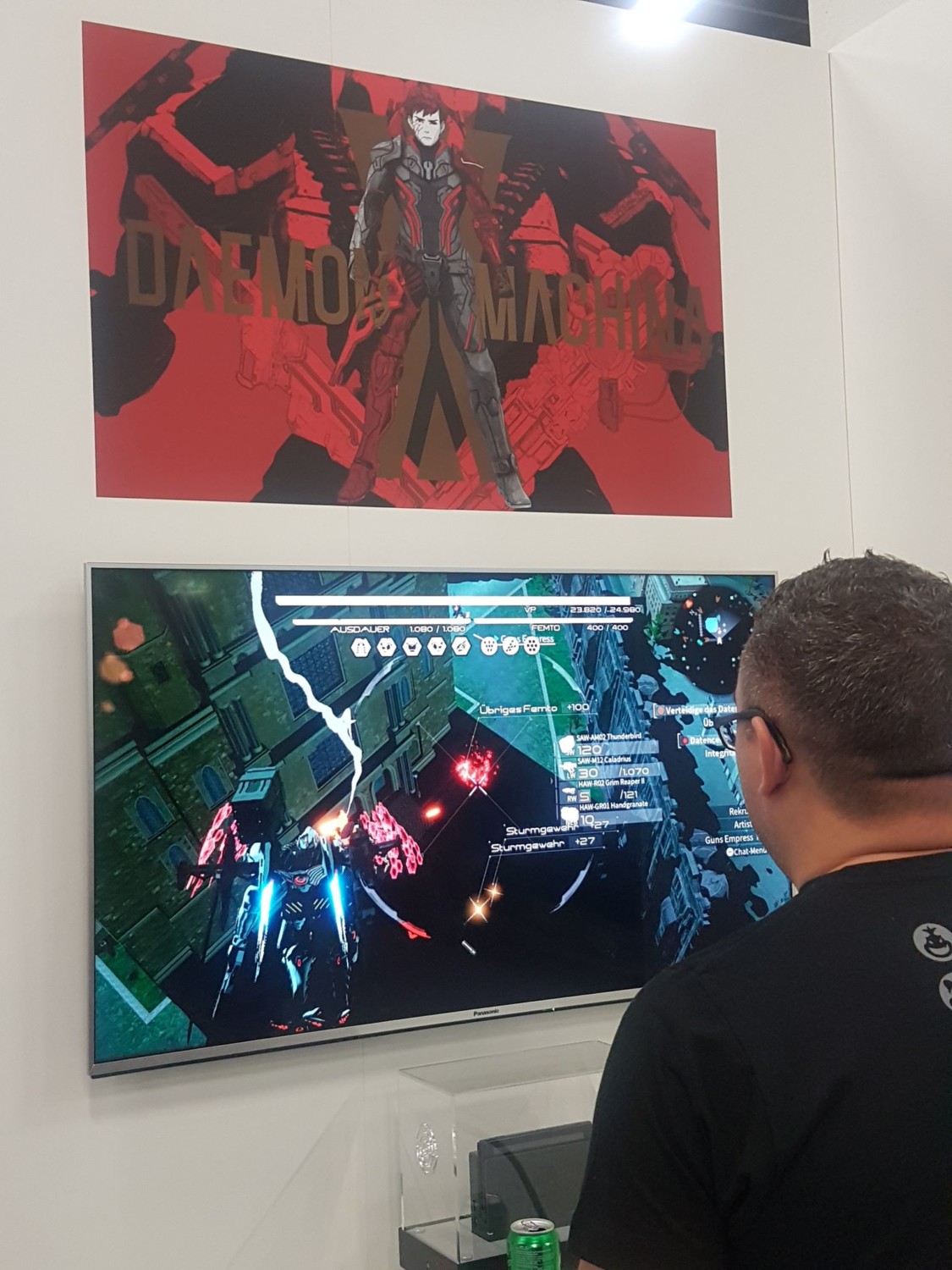 I have to admit I didn’t like the first demo on my Switch. But the developers did a great job since the last demo – “Daemon X Machina” now feels like a strong Mech game. The controls are much smoother now, you know exactly who to hit and where to go and it seems to be quite challenging – a great game for core gamers! And the technical side is up-to-date – it’s a beautiful and charming Mech game. Yes, I like the motion controls of “Star Fox Zero” still more, but “Daemon X Machina” has the potential to become a really great game. If you like hard and challenging action games and the futuristic Mech design, don’t look any further, you have found your game now.

Next stop: Layton’s Mystery Journey: Katrielle and the Millionaires’ Conspiracy 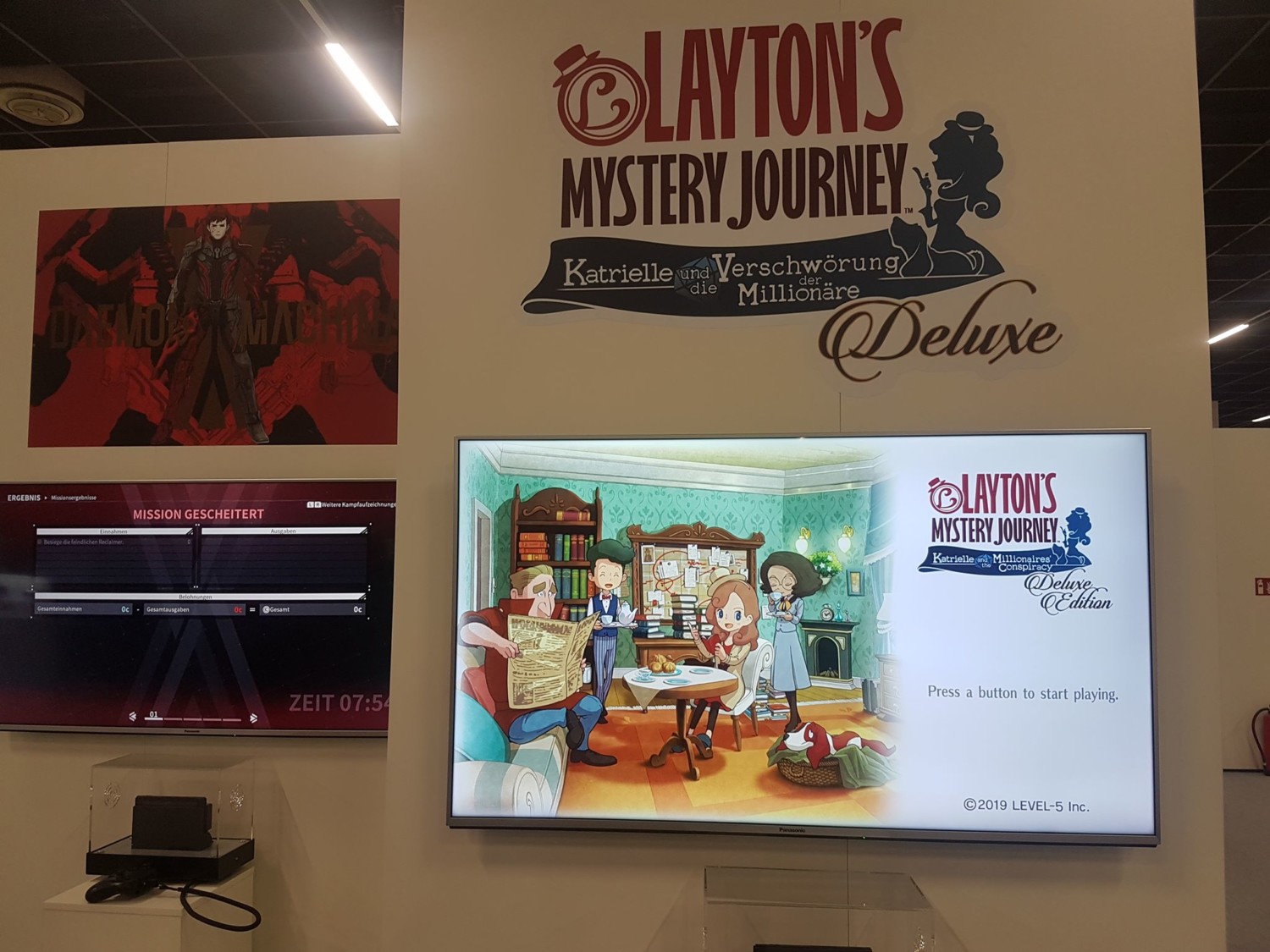 Yes, it’s a port of the 3DS game, and yes, it is kind of a deluxe version. Lots of puzzles are re-worked and you get 40 new puzzles! The DLCs of the 3DS version can be chosen from the beginning on too. It’s a typical Layton game, you have to solve every puzzle to get deeper and deeper into the plot. When you play on the TV screen you can you use the Joy-Cons – and it works great! You can also buy a touch pen (or use the Super Mario Maker 2 one) to play it in the handheld mode – but this mode you could not try out in the demo. It’s a great game for casuals and pros who like solving puzzles.

The „most hated“ Nintendo game since the E3 – and I asked myself why. It should become the best-looking Pokémon game yet and the gameplay is as great and timeless as always. In the demo you could play the “water arena” – and beat the master of the arena in a great stunning battle. I can only say: “Welcome, 8th generation.” Pokémon SS will sell like hotcakes and it will deserve it. Great fun as always. Preorder it.

My last demo at the Nintendo booth: Luigi’s Mansion 3 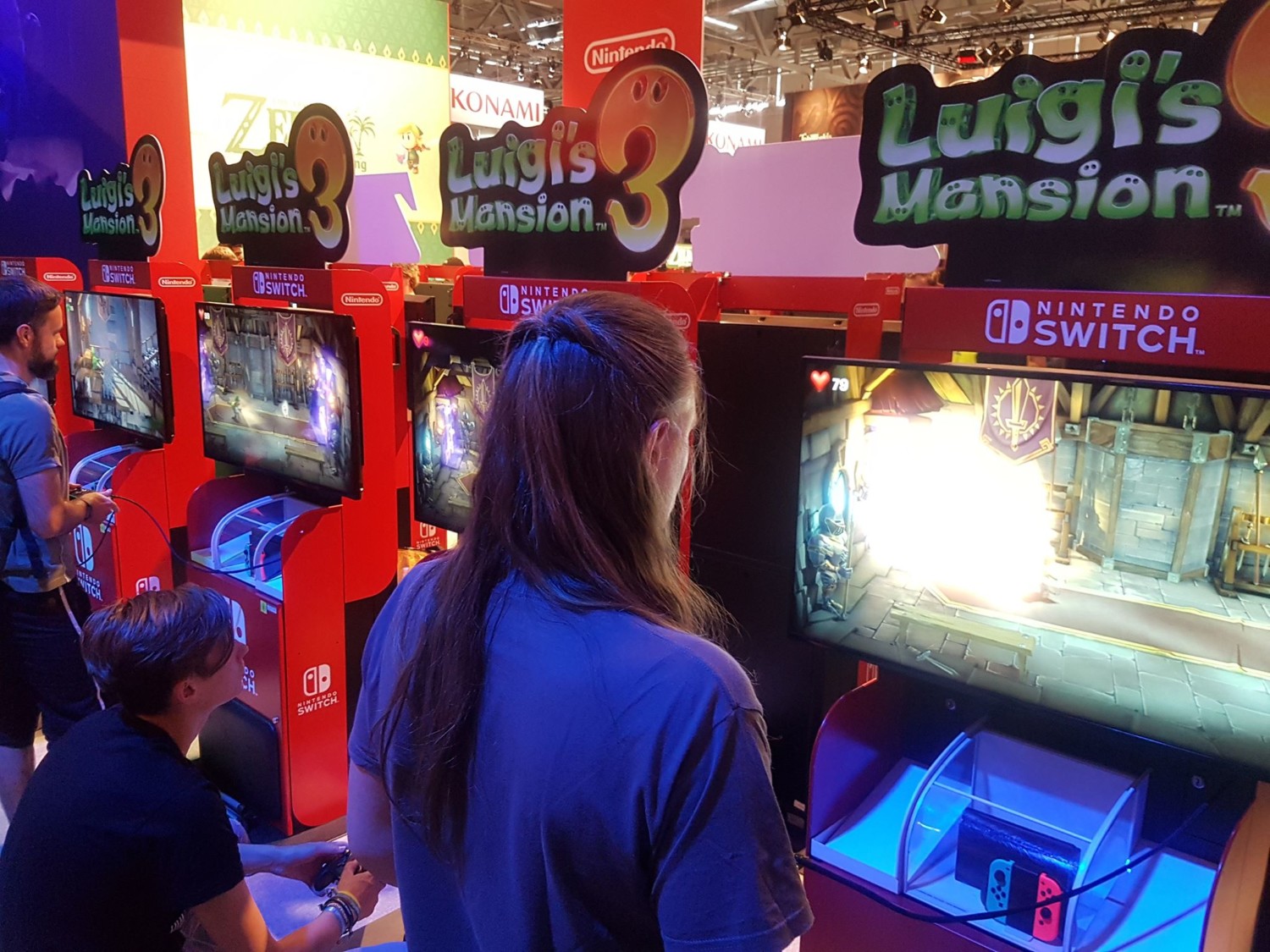 It was a pretty short demo in which you could use Gooigi, hunt several ghost and defeat one boss. But it showed all why this game will another must buy – the new gameplay mechanics make the Luigi’s Mansion experience even better. Gooigi is fun to play with and you can reach new areas because of his fluid body, you can now throw plungers to disarm the attacking ghosts and you can hit the enemies to the ground to bring down their life bar. And the graphics are awesome too – “Luigi’s Mansion 3” will be one of the best looking Switch games! It will a big hit for sure.

After Nintendo I visited Bandai Namco, but I was a little bit disappointed – no demo on a Nintendo Switch system there. So I had to ask which game I can try out that will be released on Switch too. And they told me: “Test RAD.”

My only demo at Namco’s booth: RAD 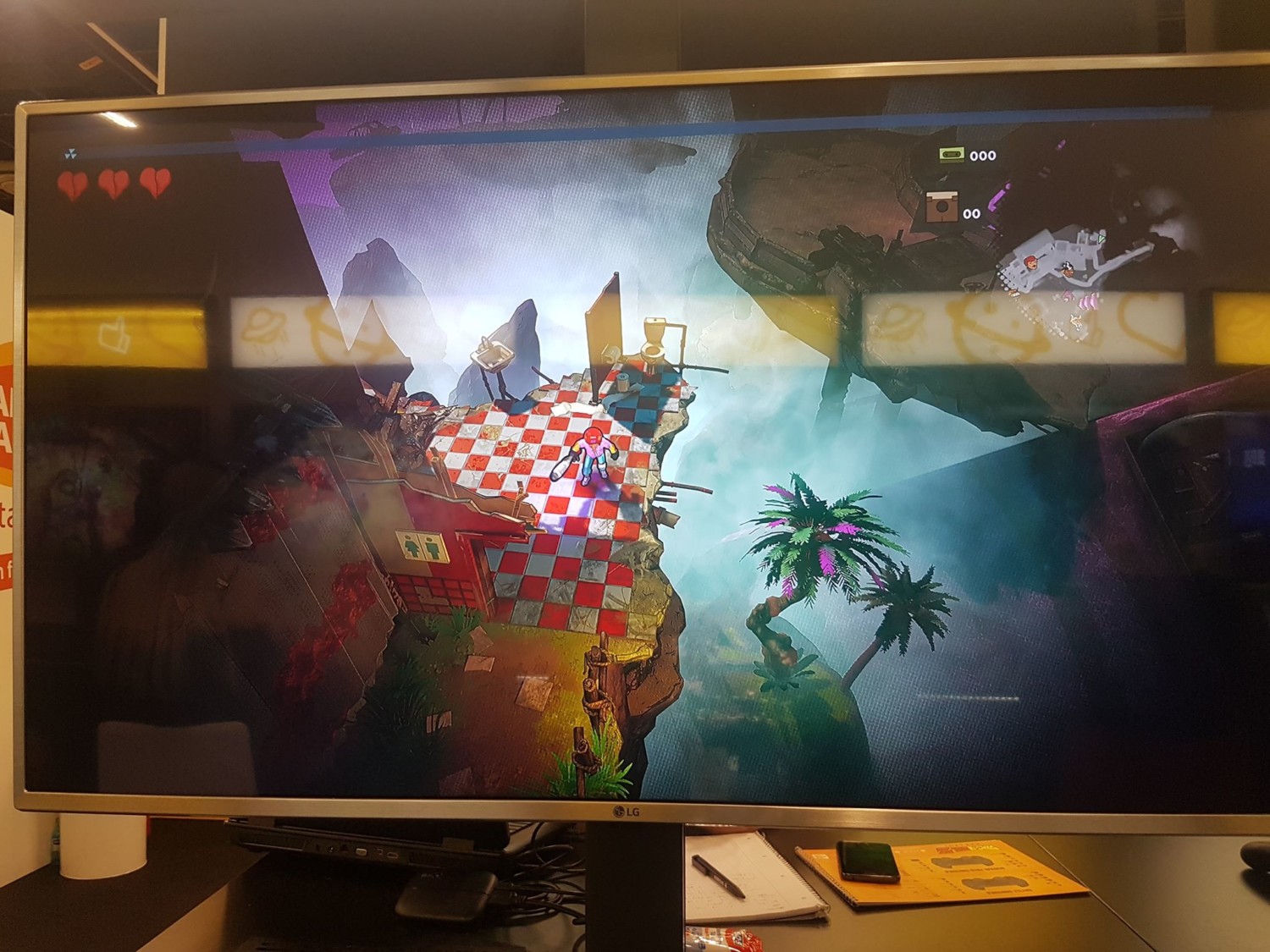 “RAD”? Never heard before. But… yes, then I could remember this video: https://www.youtube.com/watch?v=oI2bthwQRsc. “Is it worth to play?”, I asked myself. Yes, it is. It’s a cyberpunk themed rogue-like and I had a great time with it. The game style is very “cool” and you have to fight enemies for enemies in a world you have never seen before. Toilets standing next to an abyss in an apocalyptical world, monsters you really don’t wanna meet in reality, and so on… The graphics are more comic-like and the developers took the apocalypse of the humanity in stride. In some ways it reminded me of Earthworm Jim. The game offers a great gaming experience and a great humor.

But Bandai Namco – where were your Switch games? Only one to offer? Come on… 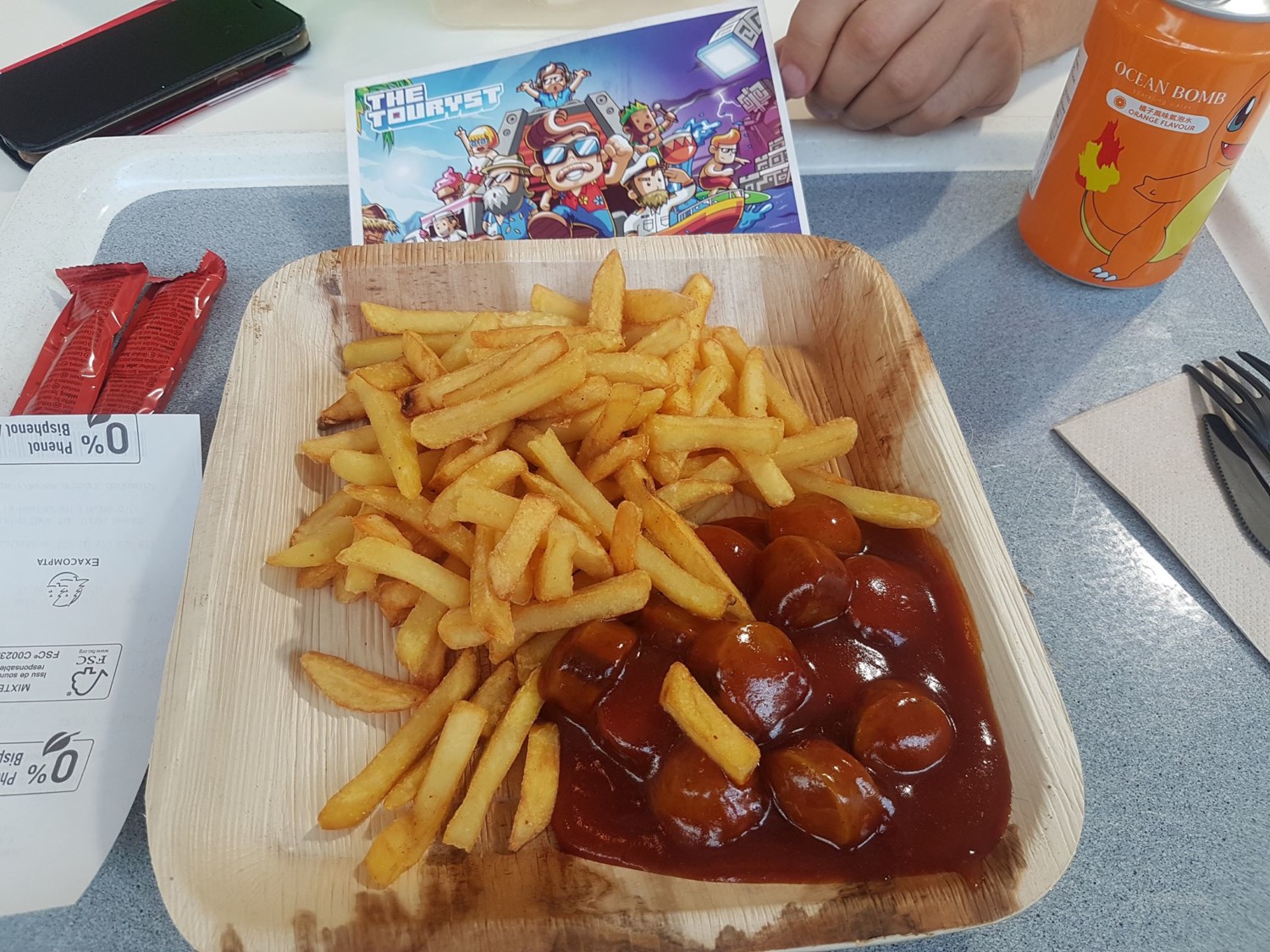 Yes, I was hungry then… I bought a totally overpriced sausage with french fries and a –haha– Pokémon orange drink. OK, it was tasty, but next time… lower the price please… After my break I went to German publisher “Headup Games”, a far better experience for Switch owners than Namco’s booth (again: “booo!”).

Back to the business area: Headup Games

“Headup Games” releases almost every game on Switch too – applause for this! Their most famous game is “Trüberbrook” – yeah, our review is coming soon! “Headup Games” had no big booth, Gregor Ebert, their PR manager took me into a small room crowded with different guys I didn’t know. Scary…? No. All of them were developers of the games they wanted to show me now! 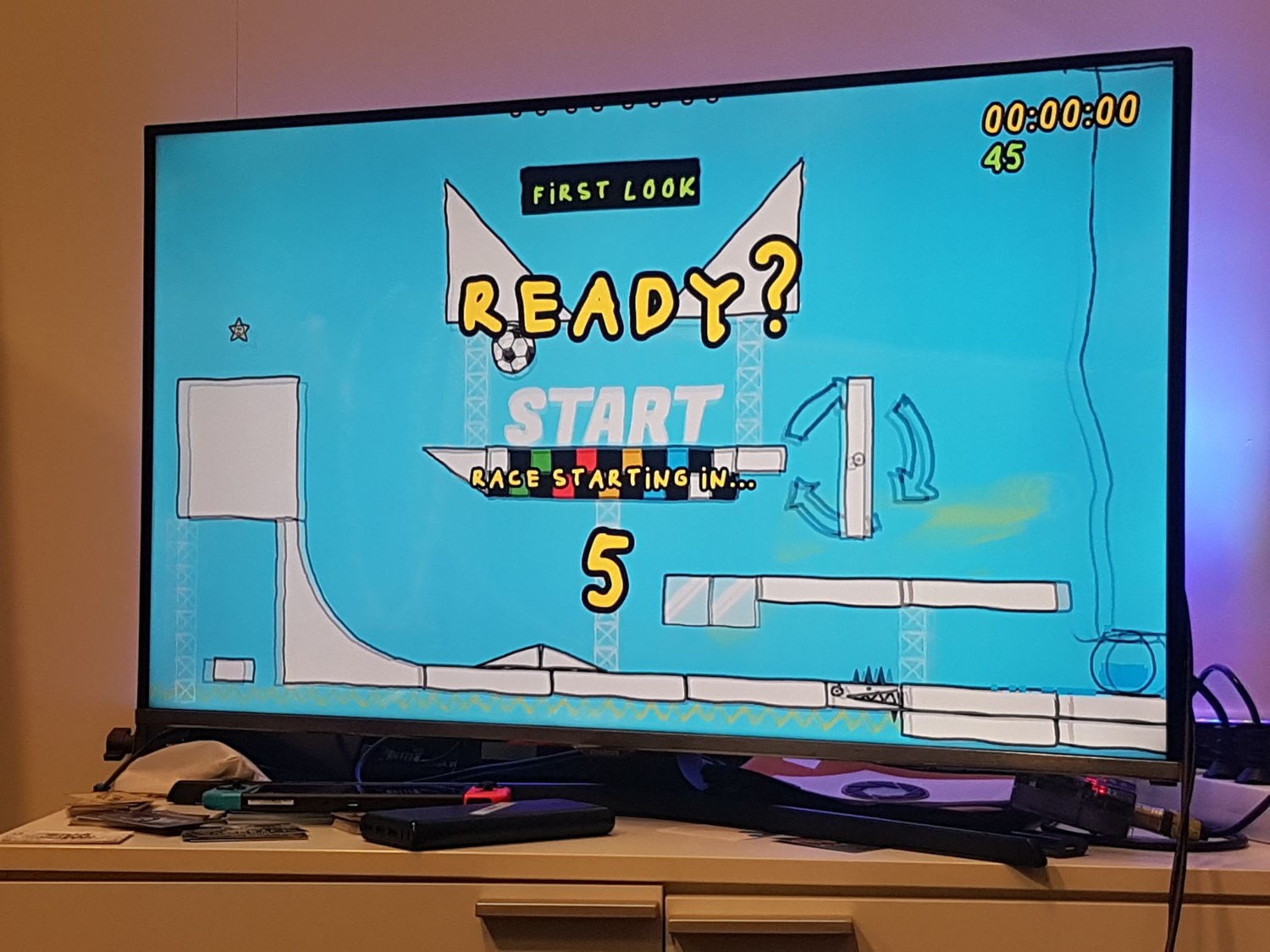 Of course, the developer from Holland was there. And he told me that his little kids drew the backgrounds of “Fromto”… Umm, yes. OK, and first, it seemed to be a game for little kids. The developer, the PR manager Gregor Ebert, the guy behind “Colt Canyon”, Jonathan Mannshoven, and me tried to play the 4-player-mode. First you have to build a track and then you have to win it. Interesting concept…! I copy you the official description of Headup’s homepage:

Fromto is a horrible, childish 2D sandbox racing game with in game track building. All players race an unfinished track in turn. When everyone fails all players must ‘work together’ to modify the track before they try again. Think strategic, build sneaky routes and trick your opponents with nifty traps and obstacles. Experiment endlessly with tons of track parts and win in unthinkable ways. Play with up to four friends (online or offline) in this action packed living playground. After you ruined all your friendships you can dive into the single player speed run challenges.
Got it? We had a lot of fun, but I think the game wasn’t finished yet. Some work to do, but it is a promising party game.

Next one: Colt Canyon 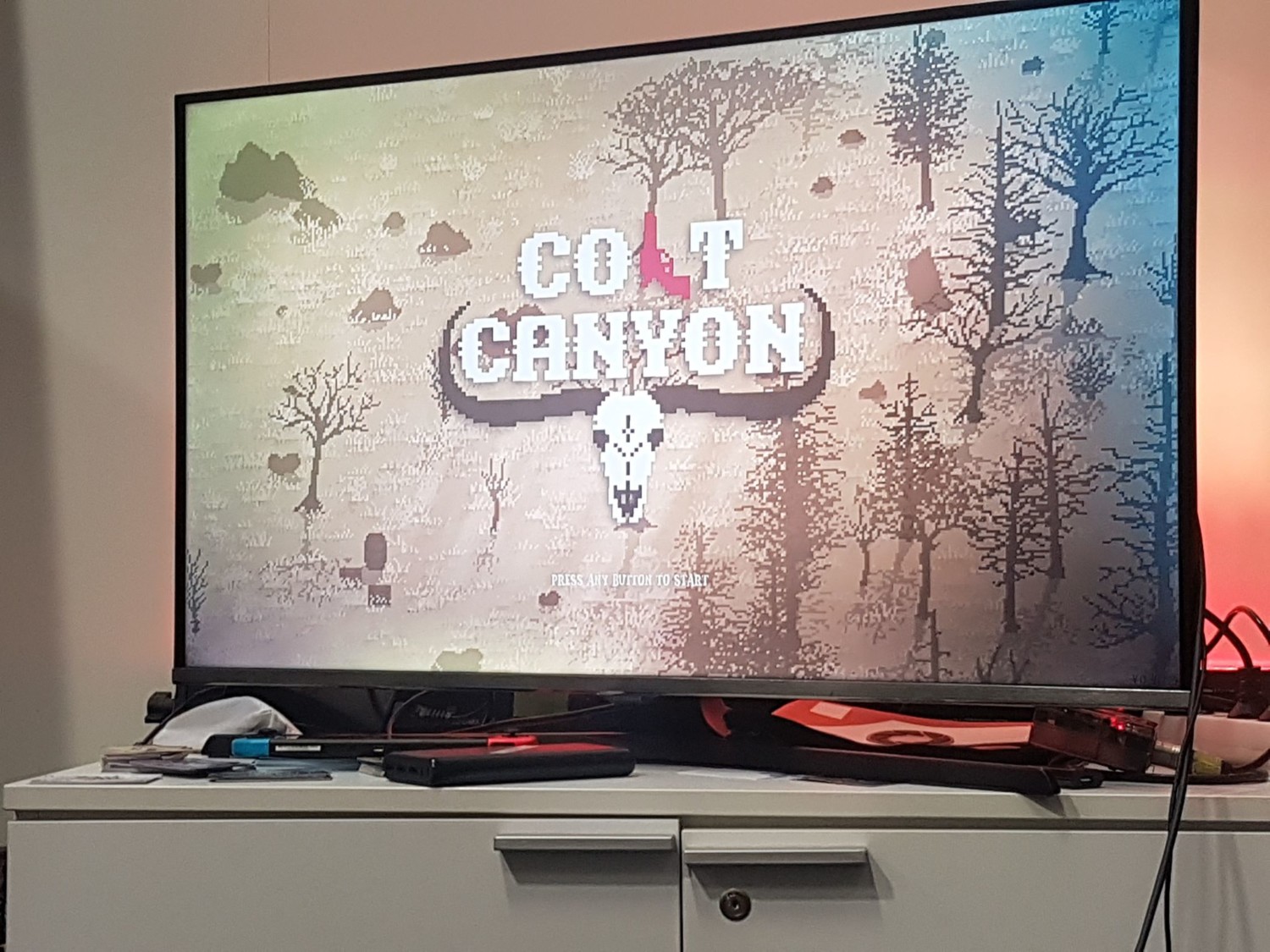 “Colt Canyon” is a western rogue-like made by the German newcomer Jonathan Mannshoven. You can progress through unlocking more characters (with varying stats and strengths) and weapons through various challenges – you wanna get more and more! It’s inspired by games like “Hotline Miami” and “Enter The Gungeon”, which became big hits on Switch. You explore large open levels and you can play them again and again – “rogue-like”-like. You can collect almost 40 deadly weapons and your enemies are animals or humans… I think everyone who likes rogue-likes should keep an eye on this game. 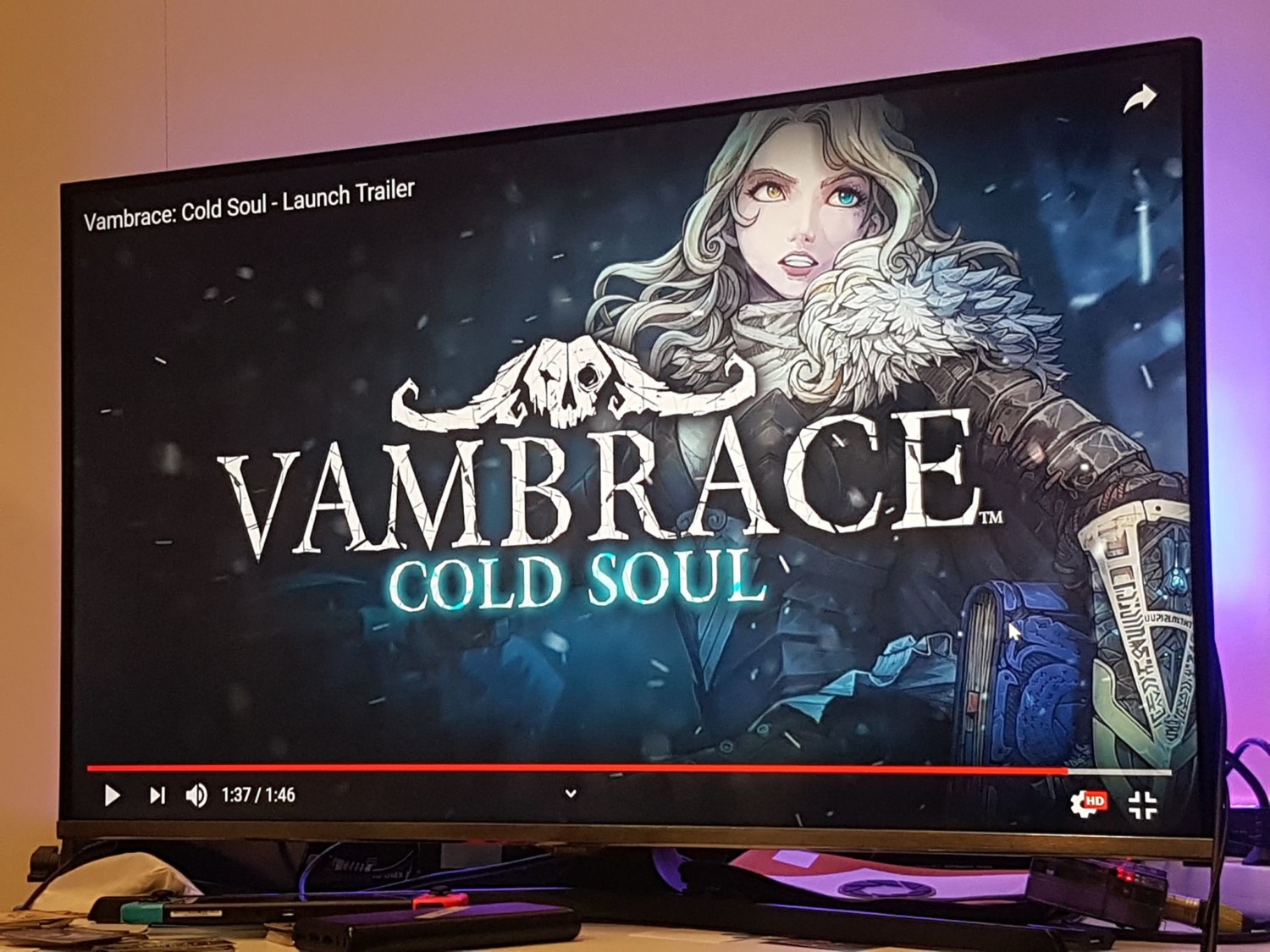 And again: the developer was there, now from Korea! But my great time at “Headup Games” was almost over, so I could only watch this trailer there: https://www.youtube.com/watch?v=uPxIFJfYczc
“Headup Games” describes it like this:

Vambrace: Cold Soul is a narrative-driven game filled with memorable characters, brutal challenges, and deep strategy. To succeed, you must choose perceptive party leaders, camp to recuperate, navigate strange encounters, and survive deadly combat. Will you scavenge for supplies to sell or use them to craft new items for your next expedition? The surface of Icenaire is cold and unforgiving. So, prepare your party well before departing…lest you join the cursed city’s undead.
The game is already out on Switch.

HIT POTENTIAL: buy it and test it! 😉

My last stop in the business area: INTRAGAMES

INTRA… who? Yes, first I thought the same, I have never heard of this developer before. You could find it at the Italian pavilion and there Sue Yim from Intragames welcomed me.

My demo there: Bookbound Brigade

“Bookbound Brigade” is a Metroidvania and it wants to be as difficult as possible – yes, the demo was hard. But I enjoyed it! Historical and literary characters we studied in school (f.e. Robin Hood or King Arthur) have to build a brigade to fight through an ancient world. You have to jump, to fight and to solve puzzles in non-linear stages – a great fun for fans of Metroid, Castlevania, Shantae or Hollow Knight! The strategic element is to build a formation out of the eight characters to reach higher platforms or to be stronger. I could play a boss fight too and it was entertaining. You have to think a lot if you wanna reach the goals. Intragames is on a good way, keep up the good work! And I got a nice BB-USB stick there – thank you!

Back to to public area: the Nintendo booth there! 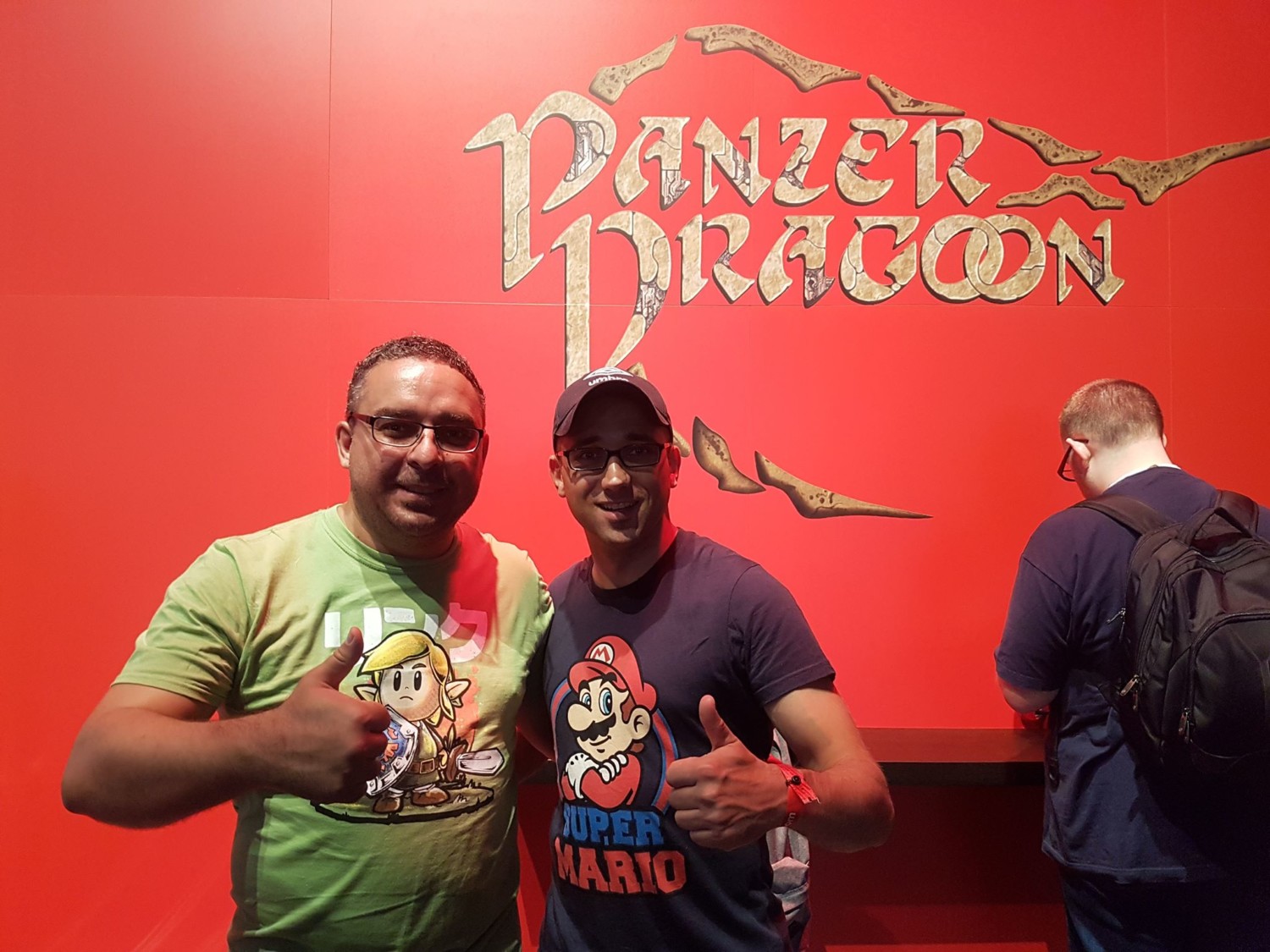 Yes, I played almost every relevant game in the business area, but three games weren’t there: “Panzer Dragoon”, “The Witcher III” and “Trials of Mana”. “Panzer Dragoon” and “Trials of Mana” were offered in a pretty short demo, but the ports and remakes of the Saturn and SNES games will become outstanding! And I have never played “The Witcher III” before, but it will be one of the best-looking Switch games – well done, CD Project RED.