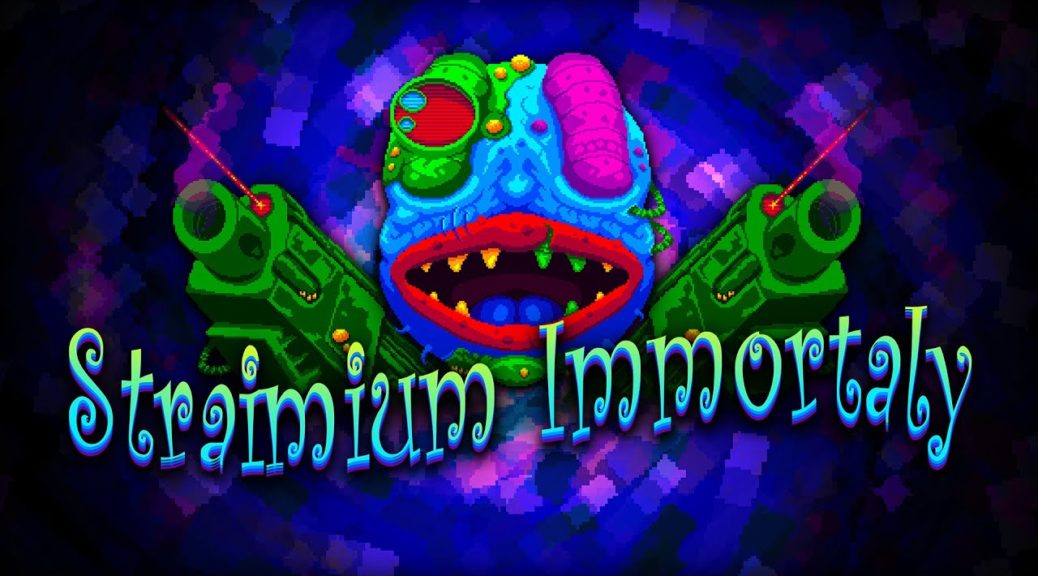 Publisher Digerati and developer Caiysware have announced their upcoming release for the Nintendo Switch!

Straimium Immortaly is a bizarre and vibrant roguelite, shump, and dungeon crawler hybrid set to launch on December 25 on the hybrid platform.

Players will take the role of a lone warrior armed with a jetpack, weapons and power-ups against the forces of the Queeni Emperess. The game is said to include a number goodies to keep gameplay fresh, such as unlockable character classes and mutators. Boss Rush and Galaxy-wide Incursion purge modes will also be available.

Bosses and beasties abound in this bizarre and vibrant roguelite/shump/dungeon crawler hybrid. Armed with a jetpack and a smorgasbord of weapons and power-ups, Straimium Immortaly pits your lone warrior against the forces of the Queeni Emperess. Agility, precision, and loads of loot are your only means of surviving the Cubicus.

The game also includes a slew of goodies to keep gameplay fresh, such as unlockable character classes, mutators, cheats and hats, Cubicus design seeds and size options, plus several game modes including a Boss Rush and Galaxy-wide Incursion purge.

• A world like no other: explore the bizarre, butts-hard procedurally generated and monster-filled rooms of the Cubicus
• Otherworldly pixel-art: old-school pixels meet vibrant new-school style
• Fly quickly, carry a big gun: from the Ionic Laser to the lightning-blasting Electra Casta, wield an arsenal of 25+ upgradeable weapons and 50+ items
• Unleash ninja powers: discover and harness a variety of mysterious shinobi abilities
• KO XL baddies: defeat a myriad of huge monstrous bosses in your bid to rid the galaxy of Queeni taint!
• Your fight, your way: unlockable classes, mutators, cheats and hats. • Level seeds and size options to customize your run. Boss Rush mode, Incursion mode, and more
• A whole ton of stats: keep track of your progress through leaderboards, achievements, and compendiums of enemies, bosses, weapons, items, and more