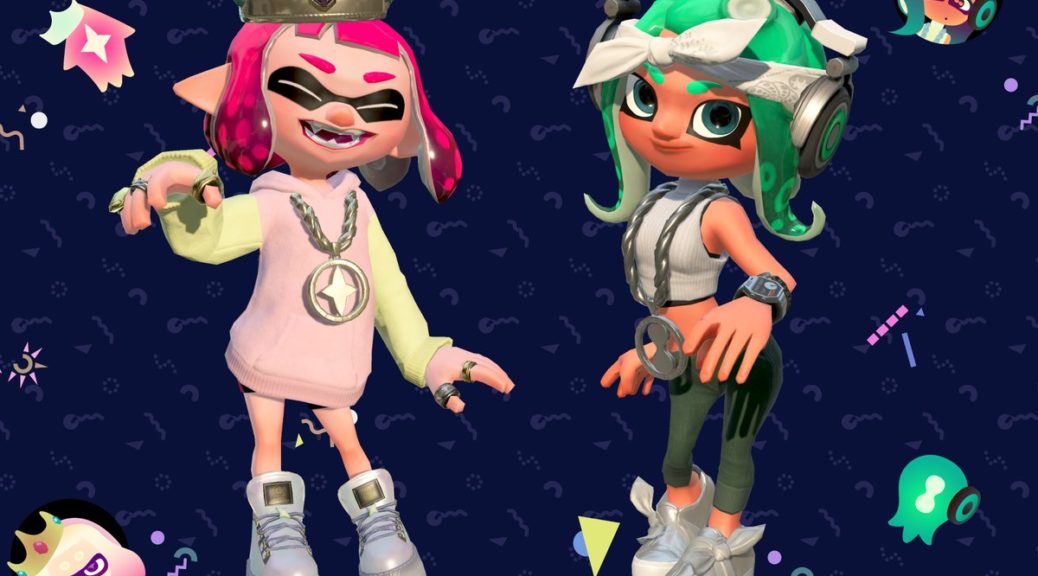 In the latest issue of Famitsu, Splatoon 2 developers shared many interesting details behind the development process of Splatoon 2 and the Splatoon 2: Octo Expansion.

One thing many do not know is the fact Splatoon 2 was already in development at the same time as the updates for Splatoon, and the same happened with the Octo Expansion which was being developed alongside Splatoon 2’s various updates.

During the early stages of the development of Octo Expansion, Nintendo had already decided to make Octoling amiibo. Nogami also confirmed that in terms of timelines, both Splatoon 2’s Hero Mode and Octo Expansion storylines take place around the same time.

Finally, decisions behind the Inkling’s moveset and attributes were left to Masahiro Sakurai and the Super Smash Bros. Ultimate development team to decide.

– Splatoon 2 was in development alongside updates for Splatoon on Wii U
– the Octo Expansion was in development alongside Splatoon 2 update
– the Chirpy Chips song “Blitz It” is the band trying to reach for new horizons with their music
– the band took a hiatus between Splatoon and Splatoon 2, explaining their absence until the 3.00 update
– Wet Floor and Bottom Feeders debuted in Splatoon 2 in order to offer different styles of music compared to the first game
– by Ver. 3.00, they decided to strike a balance by bringing back a band from the first game
– Squid Squad, the band who created “Now or Never!,” disbanded between Splatoon and Splatoon 2
– each member wanted to pursue solo careers and work with other artists
– there is a possibility of the Squid Squad reforming at some point
– the bands of the previous game have left a mark on inkling culture of today
– Wet Floor’s guitarist girl was influenced by Squid Squad, while Ink Theory’s jazz tunes were influenced by Hightide Era
– the dev team discussed playing as Octolings at the start of Splatoon 2 development
– they decided against it, as they thought it would be confusing to players if Octolings were to suddenly appear
– the Octo Expansion was developed as a way to make players sympathize with the Octolings
– Octo Expansion’s stages were not created with practice for Ranked Matches in mind
– Octo Expansion also contains a lot of leftover ideas from Splatoon’s Hero Mode campaign
– C.Q. Cumber isn’t a bad person, he’s just doing his duty
– Agent 8 doesn’t die from the explosion, as they just respawn like Inklings do in Turf War and other battle modes
– in the final few stages, if Agent 8 dies there, they really die
– restarting those stages is actually something like rewinding time
– the CQ Point system was developed as a check-and-balance for the mainly trial-and-error gameplay in the Deepsea Metro
– it was implemented to add tension to the experience, not difficulty
– it also creates a choice on which route to take for the player and also some interaction with Off the Hook
– there were originally around 150 ideas submitted by the staff, which ended up being narrowed down to 80 stages
– Ink & Watch Station was one that was quite popular among the staff
– Girl Power Station was found to be quite challenging within the staff
– the director wanted the Octoling Boy’s default hairstyle to be an afro, but the afro doesn’t change the Octoling’s hitbox
– amiibos were decided for the Octolings quite early in Octo Expansion’s development
– the staff thought that the Octolings were cute, which is why they were picked for amiibo
– the Octolings in Octo Canyon are confirmed to be a little bit older than Agent 8, which is why they look a bit different
– only elite Octoling Girls become the troops that Agent 4 fights in Hero Mode
– Octotroopers are different from regular Octolings, though they are still Octarians
– there is only one Agent 8
– the other Octolings you see in Inkopolis Square found another route to come up to above-ground
– Agent 8 is also a different character from Agent 4.
– the poems in the Mem Cakes received underground are from Agent 8’s perspective
– the ones based on things they couldn’t have seen before are actually their imaginations
– these are based on the magazine at the back of the Deepsea Metro
– Octarian-related Mem Cakes are their own memories
– the four Thangs are replaced at their respective spots every time a test subject enters The Promised Land
– the Sanitized enemies in Octo Expansion are something like zombies, having lost their will in the process
– Inoue drew a short 30-page manga regarding the events in the final sequence of Octo Expansion
– the idea for Octo Expansion’s final boss is something that Amano had wanted to do since the first Splatoon
– Nogami also confirms that Octo Expansion and Hero Mode occur around the same time
– Inoue and Nogami discussed how any plot sequences going forward will take into account the Octolings
– all online-related functionality will require Nintendo Switch Online
– software and gear updates will still be free, as well as single player and local multiplayer
– Inkling plays and moves in Super Smash Bros. Ultimate has been left up to the Smash development team and director