Game Review: The End is Nigh (Switch) | NintendoSoup 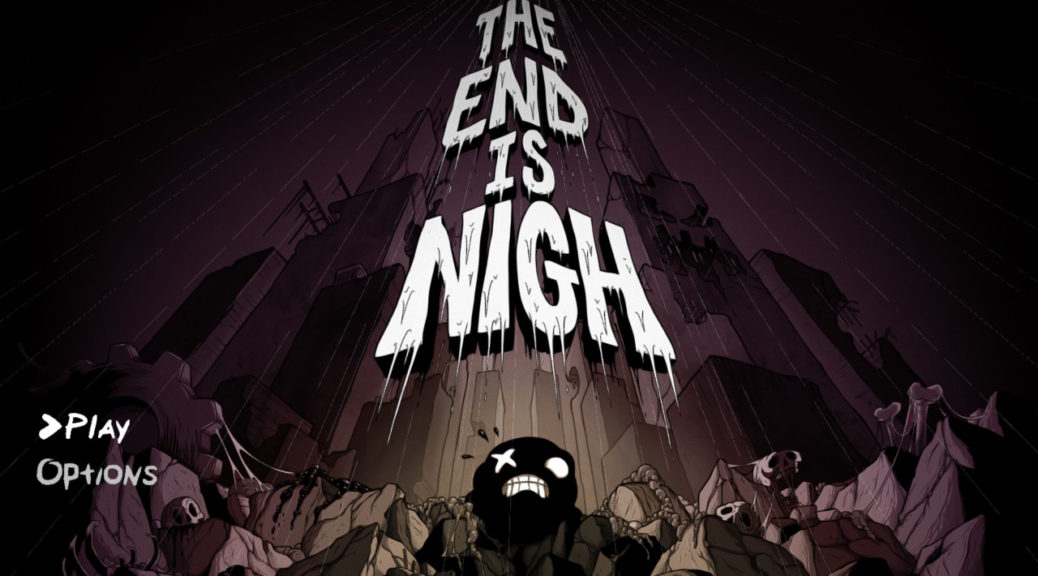 The latest 2D platformer to grace the Switch is Edmund McMillen and Tyler Glaiel’s The End is Nigh, which released on PC earlier this year.  In “The End is Nigh,” you control a black squishy blob named Ash, one of the few things still alive on Earth after some apocalyptic event. He’s been holed up at home ever since, playing video games. But when his game console breaks, Ash decides to head out into the world to make a new friend.

After the game’s first cutscene (fully voiced and animated!), the player sets out into the world. This side scrolling game quickly establishes its bleak tone with the rainy, great aesthetic of the very first world. It eases the player into the game, teaching you how to run and jump before quickly ramping up the difficulty. Unlike Meat Boy (the star of McMillen’s previous platformer), Ash can’t wall jump infinitely. Climbing requires you to grab corners, or hang from hooks jutting out of the walls. You can also kick off from corners or hooks to get some extra distance to your jumps, or hold the crouch button to automatically grab the edge as you walk off an edge. And you will definitely have to use all these skills if you plan on completing the game.

Because this game is hard. Extremely so. McMillen has returned to the “twitch platformer” genre he popularized with Super Meat Boy, and has cranked up the difficulty to even more ridiculous levels. The game is specifically designed to invoke feelings of helplessness, but also to drive the player to overcome the trials nonetheless. Respawning takes a fraction of a second, so it’s easy to throw dozens of lives into one stage trying to make it through. Precision is the key here. Many jumps require you to hold the jump button for the precise number of frames. If you’re off by just a tiny bit, it’s into the spikes with you. But each stage is fantastically designed, with new fun and frustrating mechanics being introduced regularly.

The game’s world is divided into distinctly themed stages with 15-20 levels, and you can warp to any past stage. Each level in the first half of the game (“The Past”) has a collectible called a Tumor, which is much more difficult to obtain than simply getting through the room. The are also secret rooms you can find though exploration, which reward players with Mega Tumors (worth 5 Tumors) and game cartridges that can be played at Ash’s house. These cartridges contain 8-bit challenges that reward you with even more Tumors. These Tumors come into play in the super-hard latter half of the game, “The Future,” where they function as lives. If you’ve collected 100 or so Tumors in the Past, you only have 100 lives at your disposal to tackle each 20-level world in The Future. And you’ll go through those fast, so it’s back to the Past to collect more Tumors.

I mention this overall structure of the game because of how well designed this is. Rushing through “The Past” is a difficult enough challenge, but if you don’t go for the tumors, then you’ll find you don’t have nearly enough lives to get through the worlds of “The Future.” This incentives you to return to previous levels to further explore and further hone your skills. Ash doesn’t unlock any new abilities throughout the game, but there is nonetheless a real feeling of progression as you become more skilled at the basic controls. Tumors that seemed impossible to reach before are now just within your grasp. And with a new way of looking at things, you are likely to find new secrets too.

Let’s touch on the graphics and sound here. The stylish 2D graphics have similarities to McMillen’s previous games, but manage to have a distinct visual identity. Each world has a unique color scheme to set them apart. Foreground elements are black-and-white silhouettes against backgrounds that range from bleak and desolate cities, to a flaming red hellscape. The excellent soundtrack is provided by Ridiculon, who previously did the soundtrack to McMillen’s The Binding of Isaac Rebirth. The tracks are largely rock remixes of well-known classical pieces, and anyone with a passing familiarity with classical music will recognize themes from “Flight of the Bumblebee” or “In the Hall of the Mountain King.”

Even with many lives at your disposal, you still need godlike precision and persistence to get through the game’s later worlds. The End is Nigh never stops beating down on you. Whenever I finished a particularly difficult level, only to rewarded with my first glimpse of an even more difficult stage, my heart dropped a little. I cannot stress this enough: this game is only for those who want to be pushed to the limit, and then pushed even further. But for those who dare, the game is near flawless. The stages are brilliantly designed, and if you can make it through the never-ending punishment, you’ll find something extremely rewarding.

Soup Verdict: This delectable soup may be too hot to handle!

A code was provided by Nicalis for this review.