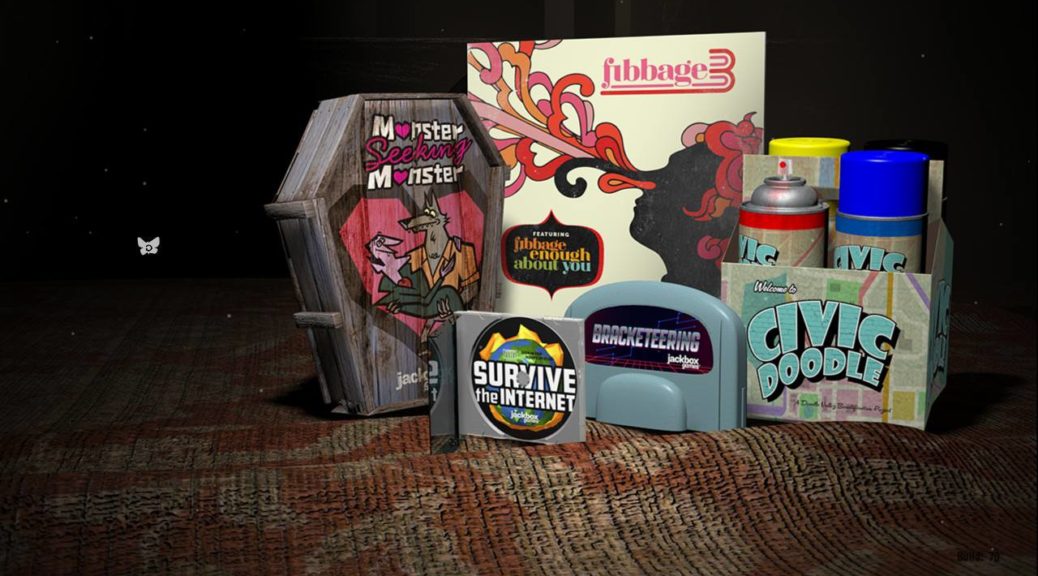 The Jackbox Party Pack 4 is the latest party game collection from the fabulous folks at Jackbox Games. What we have here is not a traditional video game. Instead of controllers, players use their own phones or tablets to input answers to prompts and try to get the most points, or the most laughs. I’ve spent a lot of time playing previous Jackbox Games with friends and family, so I was excited to see how the latest entry in the series held up. And fortunately, this fourth entry may be the strongest collection of games yet!

If you’re unfamiliar with the series, here’s a quick overview: each Party Pack contains 5 different party games for 3-8 players who join in using their own device as a controller. Each player inputs their responses (votes, answers, and drawings) on their own device, and the action plays out on the main screen. It’s difficult to describe, but when you see it play out in a room full of people you’ll instantly “get it,” and start reaching for your own phone so you can join in next round. And if you have more than 8 people, a large number of players can also “join the audience” to put in their own votes.

The games themselves are only half of the formula. Each game features its own distinct flavor, with slick visual flair, catchy music, and a host providing voice-over narration and directions to the players. Jackbox Party Pack 4 excels in its audiovisual presentation, exuding a fantastically offbeat attitude and sense of humor that draws you in.

Fibbage is an old Jackbox standby by now. The game provides a fill-in-the-blank prompt, and each player enters an answer from their device. The intent here is to deceive. Once all the answers are in, they are shown on-screen and the players try to guess the correct answer. Points are rewarded for guessing correctly, and for coming up with prompts that fool the other players. The game’s correct answers are always crazy and hard-to-believe, meaning that it’s always a challenge to guess the right answer. As with many of the other games, the experience can vary wildly depending on who you play it with. But whether it’s with friends, family, or strangers, Fibbage is always fun. The third Fibbage doesn’t stray too far from the formula of previous iterations, but it has yet to outwear its welcome.

Fibbage 3: Enough About You is a new mode introduced in Fibbage 3 that gives the game more of a personal touch. The prompts ask things like “a food you’d never eat,” or “the punchline to your favorite joke.” Other players then provide their own lie, and try to guess the truth. This mode is a welcome wrinkle to the Fibbage formula, and brought a lot more laughter than the standard game in my experience. This mode seemed to work best when the players were at least somewhat familiar with each other.

Although Fibbage 3 is a sequel, the rest of the games in Party Pack 4 are refreshingly original. The first is Survive the Internet, best described as a game where you take your friends out of context to make them look ridiculous. To start, each player writes a comment on a website, including social networks, forums, shopping sites, and news articles. The comments are then shuffled up, and another player gets to write the content to which the other player is replying. Points are given for the “Best Burn,” and “pity points” are handed out to the player who gets “burnt.” This ended up being one of my favorite games in the pack because of how ridiculous things can get.

The presentation of “Survive the Internet” is one of the best parts of the game. It’s presented as a broadcast of the host’s laptop, and you’ll often get a peek at the icons on his desktop, his chat messages with his mom, and his search history. This makes the socially awkward “Todd,” host of Survive the Internet, more interesting and endearing than many of the other games’ hosts.

Perhaps the most unique game of the pack, Monster Seeking Monster has you sending messages to other players in hopes of getting a date. It’s split up into 6 nights, and each night players send messages to each other from their devices. At the end of the messaging period, each player picks the other player who they want to date. If you both pick each other, score! You get a heart added to your tally. The twist, however, is that each player is a monster in disguise and has a secret power. The Werewolf can turn other players into werewolves by dating them on nights with a full moon. The Mummy spreads a curse to other players, and the only way the curse can be broken is if all players get cursed. And the Two-Faced Creep gets bonus points for every player he rejects. Things are kept interesting by revealing the top-scoring monster after every night, requiring players to adapt their strategies accordingly.

Monster Seeking Monster is not perfect. The Monster Powers seem unbalanced, making wins seem almost random. Getting any points at all is dependent on getting a date, and some players will end up being the odd man out and get rejected more often than not. (Too much like real life!) But the presentation for this game is polished and groovy, and the laughs are more important than winning.

Bracketeering, the penultimate game in the pack, is a fun twist on the “Quiplash” games from previous Jackbox games. Like in Quiplash, players are coming up with answers to funny prompts, and voting on the best. But Bracketeering is not just a retread. For starters, up to 16 people can play, rather than the limit of 8 for most Jackbox games. All players answer the same question, and responses are paired up against each other in one-on-one fights, with the best two answers proceeding to a championship. But before each round, players get to place their predictions as to what answer they think will win, and points are awarded based on coming up with good answers, and for predicting the outcomes correctly. The game takes place in 3 brackets, with the second and third being “Double Blind” and “Triple Blind” respectively. The game will provide the category (for example: superheroes or supervillains), but not reveal the actual prompt (Superhero or supervillain most in need of a makeover) until after the responses are entered.

Each Jackbox Party Pack seems to contain at least one game focused on drawing instead of writing, and Civic Doodle continues that tradition. The scenario is you’re a group of volunteers helping to spruce up a town by collaborating on murals. Players are pitted against each other as they simultaneously add to a drawing. A vote is cast, and the winner is used as the base for the next two players to draw on. The final round of each game is a portrait instead of a mural, and all 3-8 players simultaneously draw the eyes, then the nose, then the mouth of a resident of Doodle Valley. Again, each winner is used as the new base for the next stage of drawing. The finished product always ends up being a hilarious mishmash of styles. Like all other games in the pack, points are given out and a winner is crowned, but the focus is on the crazy things you’re drawing.

Unfortunately, during our testing, we encountered some technical problems with this game. The drawings would not always render correctly on the big screen. Parts of the illustration displayed on-screen would just be missing for no apparent reason. It wasn’t clear whether the problem was with the Jackbox servers, or the Switch port of the game, but either way, it negatively impacted our enjoyment of Civic Doodle. The potential is here for this game to be a winner like the rest, but the technical issues led to confusion and disappointment during our time with this one. (UPDATE: This issue seems to be patched.) 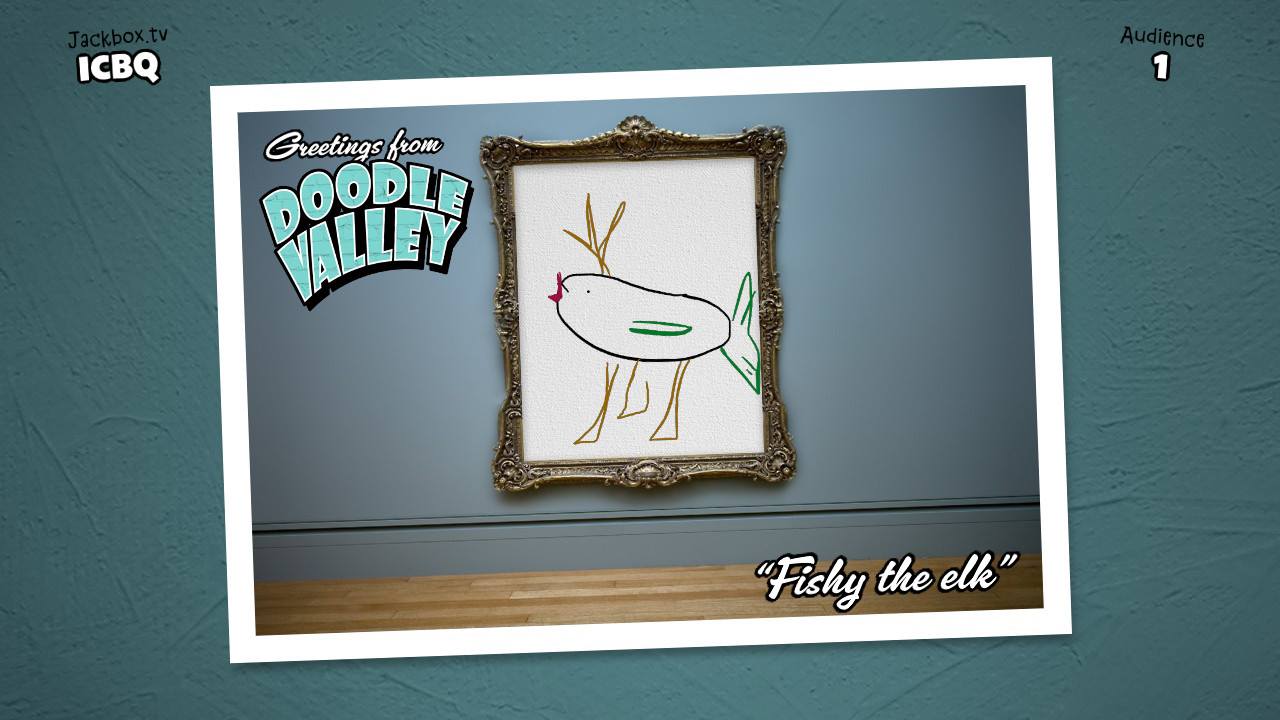 The Jackbox Party Pack 4 is nothing too groundbreaking for fans of Jackbox Games, but it doesn’t need to be: if it ain’t broke, don’t fix it. The polished presentation, great writing, and fantastic variety of games is what Jackbox fans know, love and expect, and Jackbox Party Pack 4 is sure to be a hit at any get-together. However, some technical issues with Civic Doodle prevent the game from getting an unequivocal recommendation.

Soup Verdict: Bring this soup to a party, and people will keep coming back for more.

A code was provided by Jackbox Games for the purposes of this review.