Violett, developed by Forever Entertainment, was originally released in 2013 as a mobile. The game has since been remastered and ported onto the Nintendo Switch. The game is suggested to be played utilizing the Switch’s touchscreen capabilities. However, the controls have been adjusted to accommodate docked mode as well. This point and click adventure has some very unique puzzles that will rattle your brain. I decided to respect the developers and play this game in handheld mode only and jab the screen to completion.

A tale as old as time…A young, rebellious girl, full of teen angst moves to a dilapidated old house with her parents. They are seen fighting and our character, Violett, is not happy with her situation. She reaches into a hole in her wall and is whisked away to a magical land. Our first glimpse into this other world, we find Violett trapped in a cage next to what appears to be a bug. We learn that humans can acquire magical powers when being near a fairie. Violett then realizes she has new telepathic powers. After solving the puzzle to break free, you make you way into the first environment. This first room is your first taste of what it is to come; a series of tiny puzzles you must solve to proceed to the next stage. You then procced to an M.C. Escher inspired hub world. Each area is more odd than the next, and the game gives you very little information as to exactly where you are. You can find small scrolls that explain the creatures in a little more detail. It does appear to be loosely inspired by Alice in Wonderland. In any case, it is very hard to follow and understand exactly what the story is and what the point of collecting the orbs is for. 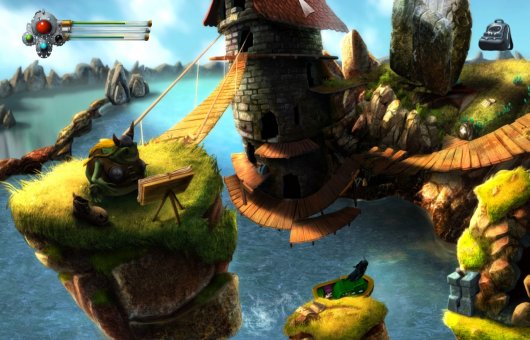 Violett is a classic point and click adventure game. You navigate through different areas collecting shiny metal pieces of…something? There are different items hidden in each level that are needed to complete the area. In one part of the adventure, you maneuver a series of pullies to stockpile matches. After collecting five, you craft them into a raft and sail across to the other side. In the corner of the screen is a helpful four-part wheel. It provides a series of hints that will help you complete the area’s task. The puzzles vary from mild to slightly difficult. A few will leave you scratching your head. However, the answers are always hidden in plain sight. You also have a book bag that you store items in. A few items will be used in the area you find it in, but some will be used later. The game, originally for mobile, is meant to be played with touch screen. You move Violett throughout the level, completing tasks and collecting items. You can use the sticks and buttons if you prefer.

The colors and textures are quite pretty. The animations are subtle but are done in an effective way. I did find that some necessary items were muddied in the background and hard to see. The characters and environments were rich with detail. The art style definitely transported you into this whimsical and wonderful world. The game ran smoothly aside from the odd and disruptive auto-save. As a mobile title, it was ported beautifully to the Switch. 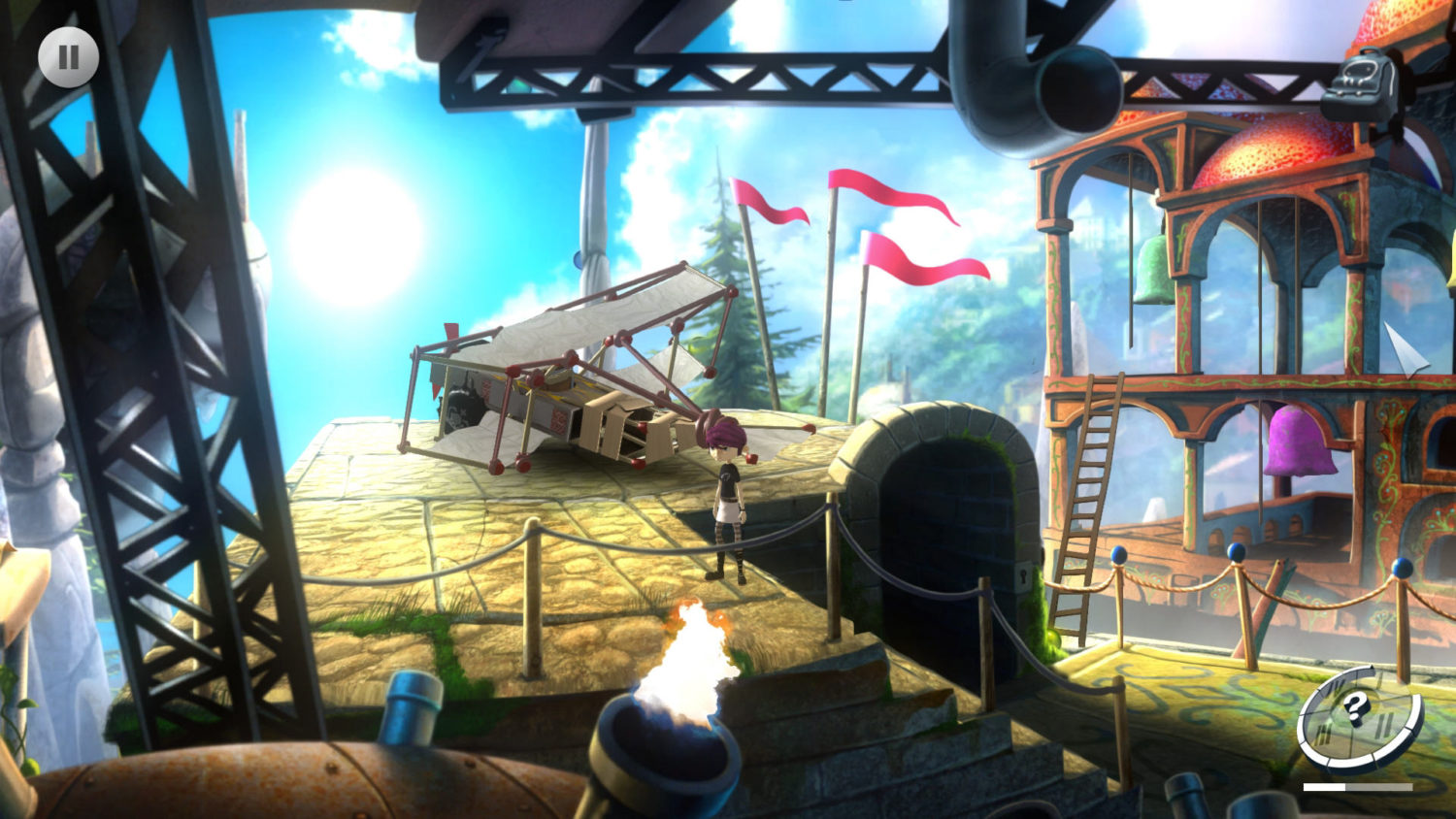 The game is very pretty and does offer some challenging puzzles. I did find the game taxing in some parts. The hardest part of the game was trying to finish it. I don’t think the game has much replay value. Once you get through the game, you probably will not want to revisit. The story was weird and confusing and didn’t provide enough plot. The side characters had interesting designs and were fun to interact with. 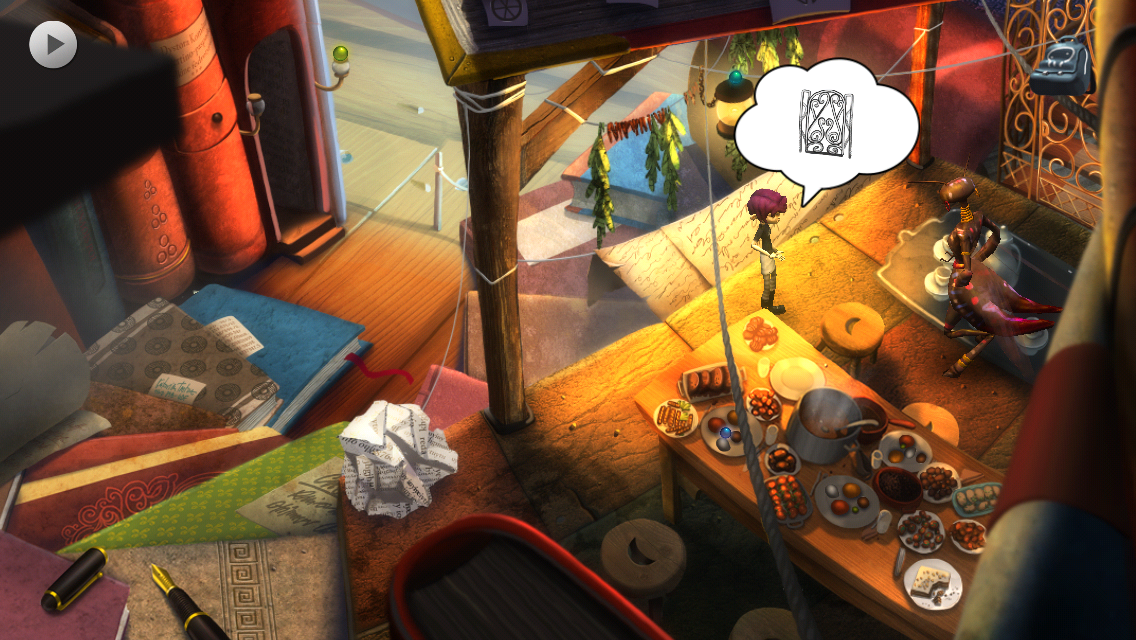 The game does have enough content to support the $9.99 price tag. To complete the game without putting it down, will take you roughly three hours to finish it. While the puzzles were challenging, the clues and hints help you along. The hardest part was making out where the tools where because they blended into the background. I like Violett‘s overall design and color scheme. The story was a bit confusing and that made it hard to invest in. The touch feature was not user friendly at all times and that it made it a bit frustrating. The soundtrack was whimsical and enchanting and in some parts was the best thing about the area. It was hard to know why we had to collect amulet pieces and what the point was. I believe overall was getting Violett home, but if she wanted to escape in the first place, what is the reason? I did enjoy the oversized frogs, cockroaches, termites and flies they used as characters. I thought their “voices” were cool. The Switch version of the game was definitely better looking and more detailed than it’s mobile counterpart. However, the mobile version has a more attractive price point at $.99 cents.

SOUP VERDICT: This cup of soup looks great, but it’s certainly not easy to finish.