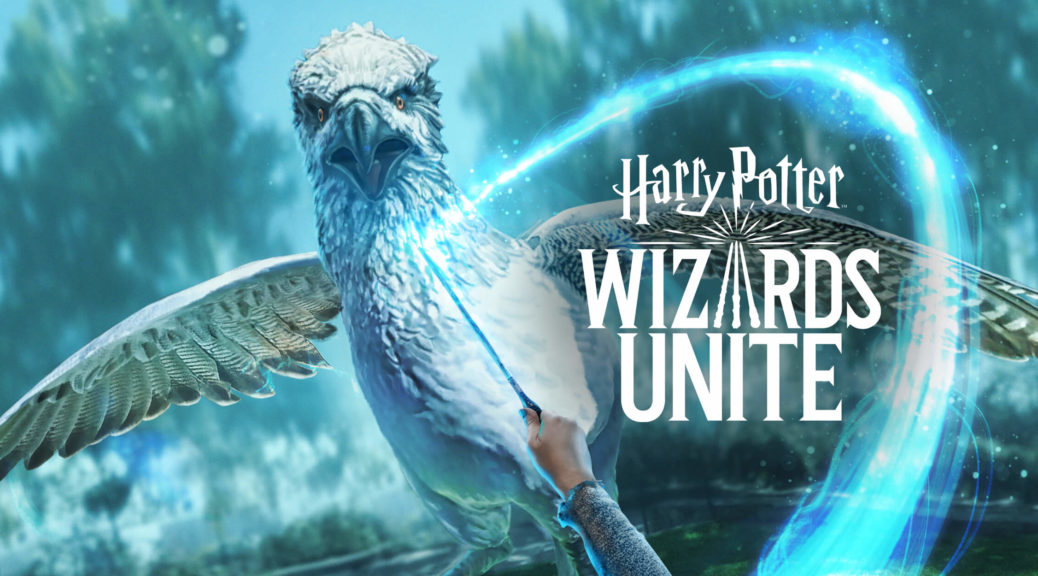 Previously, we reported that Niantic Labs was working on Harry Potter: Wizards Unite – a new AR game similar to Pokemon GO. After months of radio-silence, the company is now offering the public its first-look at the mobile title in action.

A new website for the game is now live over here – offering new details on its mechanics.

Unlike Pokemon GO, players can fight monsters and even re-enact movie events at certain locations in the real world. Casting spells will be as easy as drawing symbols on one’s screen. Friends can even team-up to tackle magic fortresses together.

Check out some samples of gameplay below, along with more details.

Niantic, Inc. and WB Games San Francisco are excited to finally share the first look into Harry Potter: Wizards Unite. For the first time, you’ll soon embark on your own Wizarding World adventure together with friends in the real world.

Harry Potter: Wizards Unite combines content and characters you know and love from both the original Harry Potter series and the Fantastic Beasts films in a unique Wizarding World experience. It’s up to you to ready your wand, prepare your potions, brush up your spells and help prevent The Calamity from exposing the secrets of the wizarding world.

PLAY YOUR PART IN THE WIZARDING WORLD

A calamity has befallen the wizarding world, causing artefacts, creatures, people, and even memories to mysteriously appear in the Muggle world. Witches and wizards from across the globe must come together to solve the mystery of The Calamity, overcome the confounding chaotic magic that surrounds these “Foundables,” and return them to their rightful place, keeping them safe from Muggle eyes.

Your journey begins as a new recruit of the Statute of Secrecy Task Force, established by the Ministry of Magic and the International Confederation of Wizards for the purpose of investigating and containing The Calamity.

THE MAGIC IS ALL AROUND YOU

As you step outside and explore the world, the Map will reveal Traces of magic, highlighting the location of magical Foundables. While players can find these Traces all around them, certain Foundables may be more likely to appear at various types of real-world locations including parks, banks, municipal buildings, college campuses, libraries, monuments, zoos, art galleries, and more. Cast a variety of spells to overcome the Confoundable magic, keep the magical Foundables safe, and send them back to the wizarding world. By returning Foundables, you’ll earn unique rewards that can be tracked in the game Registry.

As you cast spells, you’ll consume Spell Energy. Be sure to regularly stop by Inns, found at Muggle locations around the world, to collect food and drinks that replenish your Spell Energy. While exploring, you’ll also come across ingredients for brewing Potions, which will aid you in different aspects of your Wizarding World journey. These ingredients can be found on the Map, varying by the environment, weather, and time of day, as well as in specially designated Greenhouses.

Make sure to also keep an eye out for Portmanteaus, which can be unlocked to reveal Portkeys that whisk you away to iconic wizarding world locations. For the first time you’ll be able to step into a full 360-degree Advanced AR immersive experience in places like Ollivander’s Wand Shop.

Test your combat skills by visiting one of the multiple Fortresses indicated on the Map. Fortresses are host to Wizarding Challenges, real-time multiplayer battles against dangerous foes, including Death Eaters and soul-sucking Dementors. You won’t want to face these threats alone–gather your friends to take on threats of even higher levels and recover rarer magical Foundables from within the Fortress walls.

To further develop your wizarding skills, you can also choose to specialize in different magical Professions. Aurors, Magizoologists, and Professors each have their own unique skills and abilities that will come in handy at different times, particularly during Wizarding Challenges. Team up and strategize with witches and wizards from other Professions to tip the scales in your favor.

All in all, it’s exciting to see Niantic Labs taking its mobile technology beyond Pokemon GO! Let’s hope the game will see a decent success when it launches in the future.