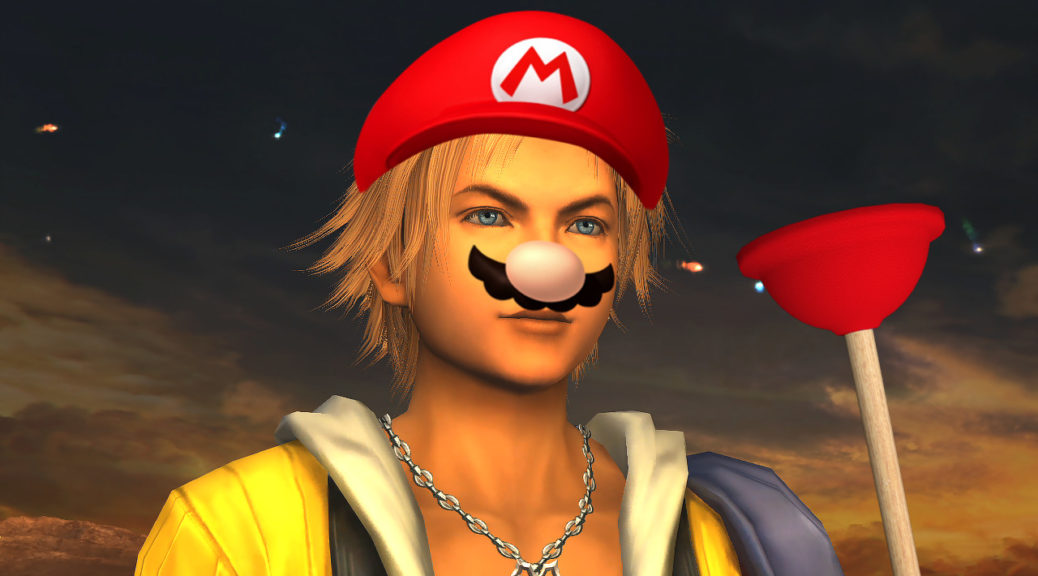 As most Final Fantasy X fans will know, the game’s protagonist Tidus starts off as a popular Blitzball athlete before embarking on his own world-spanning adventure. Well, things could have turned out really differently for the character’s occupation, according to his designers!

During a Famitsu interview about the development of Final Fantasy X, Square Enix’s Tetsuya Nomura, Motomu Toriyama, Yoshinori Kitase, and Kazushige Nojima shared more about how the game’s setting came to be. Most notably, Tidus was initially planned to be a plumber to match with the game’s aquatic world. However, this concept eventually evolved into Tidus being a water-based athlete instead:

Nojima: At the beginning of the game’s development, there was a time when Tidus was designed to be an underwater plumber in order to get the characters into water.

Nomura: Up until Final Fantasy VIII, I sometimes drew designs in advance and decided where to use them in the game, but Final Fantasy X had a setting first, and I designed it based on that. However, settings often expand more and more into development. The earlier setting where Tidus was a plumber was eventually changed to one where he was a Blitzball player.

Kitase : There wasn’t much of a sporting element in past Final Fantasy games, so I thought it would be a fresh challenge. As an athlete, Tidus would be a unique protagonist in the series. So I consulted with Mr. Nojima and changed Tidus from being a plumber in water to being an athlete who is active in water.

Interestingly, remnants of the plumber concept somewhat remain – in the form of Tidus’ unusual attire:

Nomura: Tidus’ overalls were originally designed to resemble working attire. But in the end it became a sporty design for an athlete.

What do you think of this bizarre history behind Tidus’ development as Final Fantasy X‘s hero? Would you have loved to see Tidus as a plumber? Feel free to share below!