Creating a Whole New World: An In-depth Look at Development of The Legend of Zelda BoTW | NintendoSoup

Creating the Kingdom of Hyrule in The Legend of Zelda: Breath of the Wild was a mammoth task for Nintendo and we got to take a good look at it this year’s Computer Entertainment Developers Conference.

The below content was translated by Matt Walker (@gypsyotoko) from an article by 4gamer.

Building such a vast and open world was never going to be easy, and Nintendo did much to make sure that Murphy’s law was kept in check. One of the first thing they got to doing was to build their management tools within the game. By putting bubble signs up (resembling post-its) around the world, the development teams were kept up to date with what was going around the world they were crafting and that no one would be doing the same thing twice. 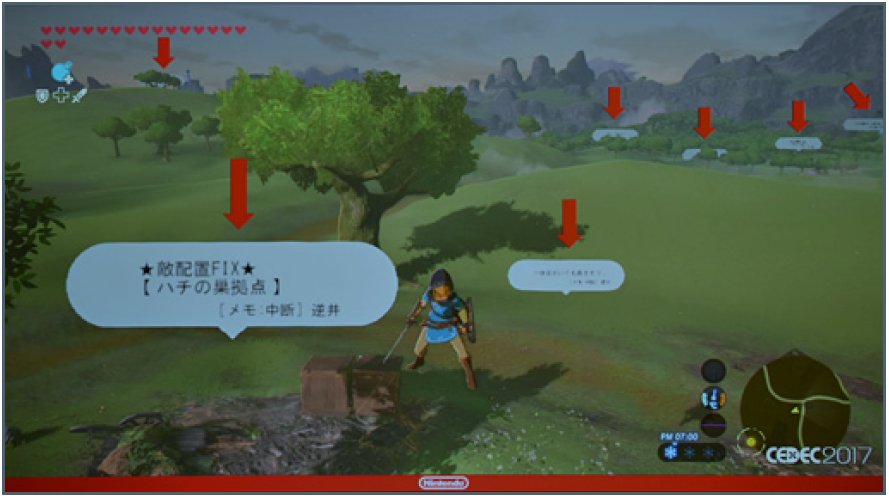 The bubble signs were also linked to any additional information conveyed in meetings. 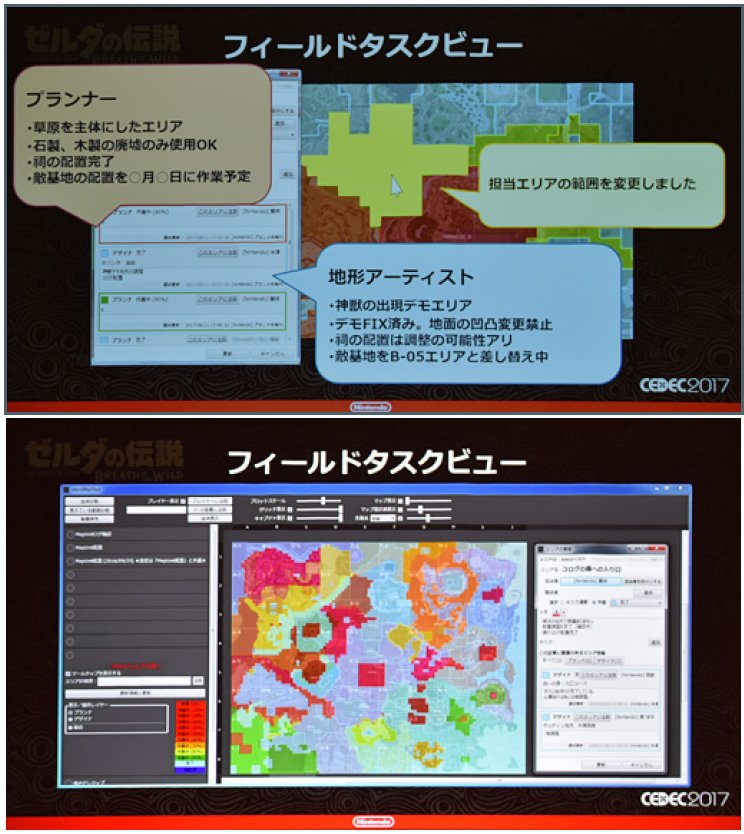 And if the post-it bubble sign needed to convey a message that was on a higher level, across greater areas, there was also management tools developed for it as well. All these were done to ensure than communication when developing such a vast and open world was smooth. It was also a good way for developers to share ideas they have at the spur of the moment.

Also used in the development was a variety of geometrical shapes. The triangle shape, in particular, was heavily used in the designing of the world. Triangles simulate mountains, hills and knolls around Hyrule and provided a variety of gameplay features. Firstly, it presents itself as an obstacle in which players can choose to climb over or just walk around. 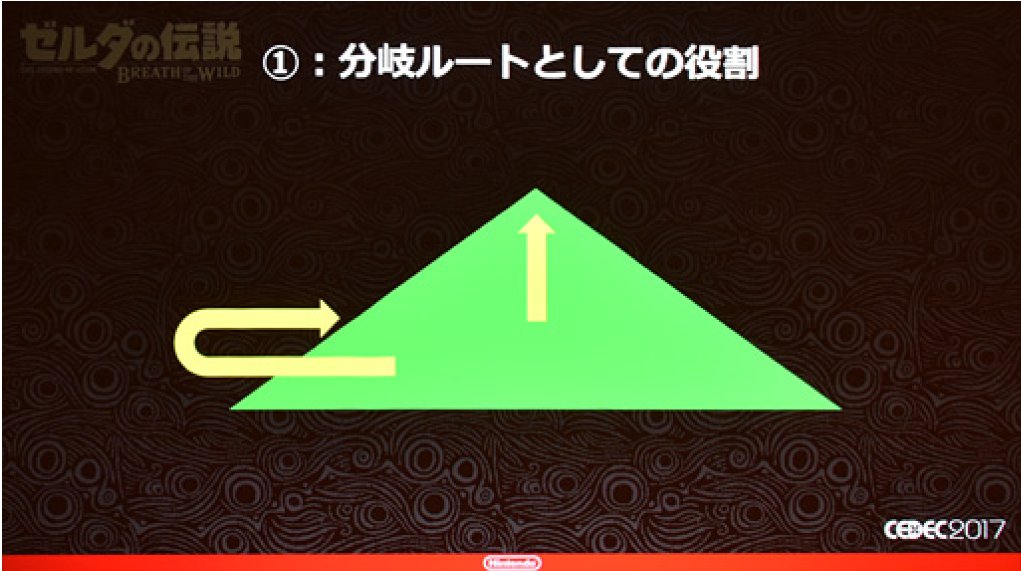 It can also be used to partially obscure items of interest behind them so that players will be interested to find out what was behind them. 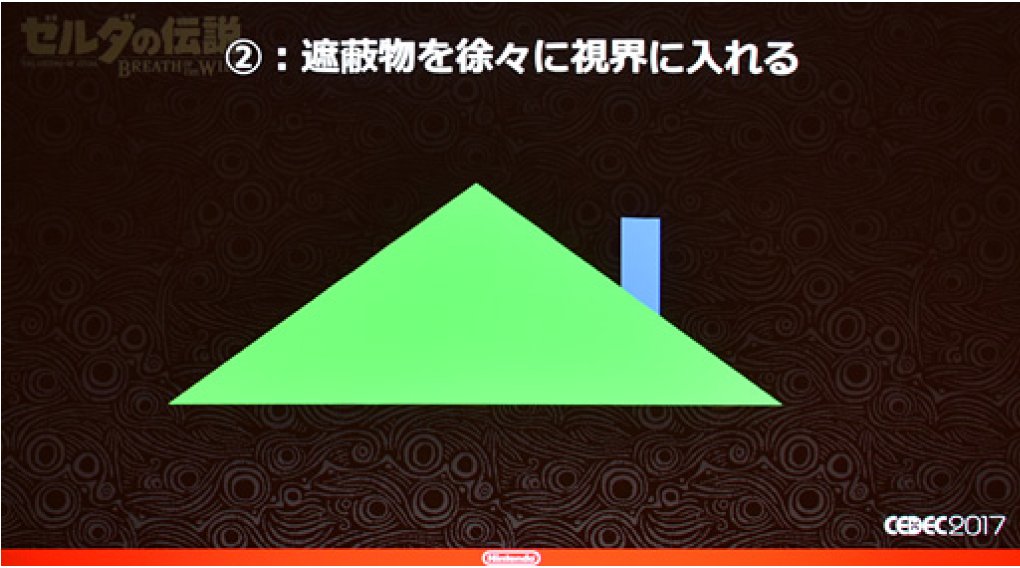 There were also variations to the conventional triangle to make the shape more interesting and arouse the player’s interest. Korok seeds are usually hidden in such ‘triangles’. 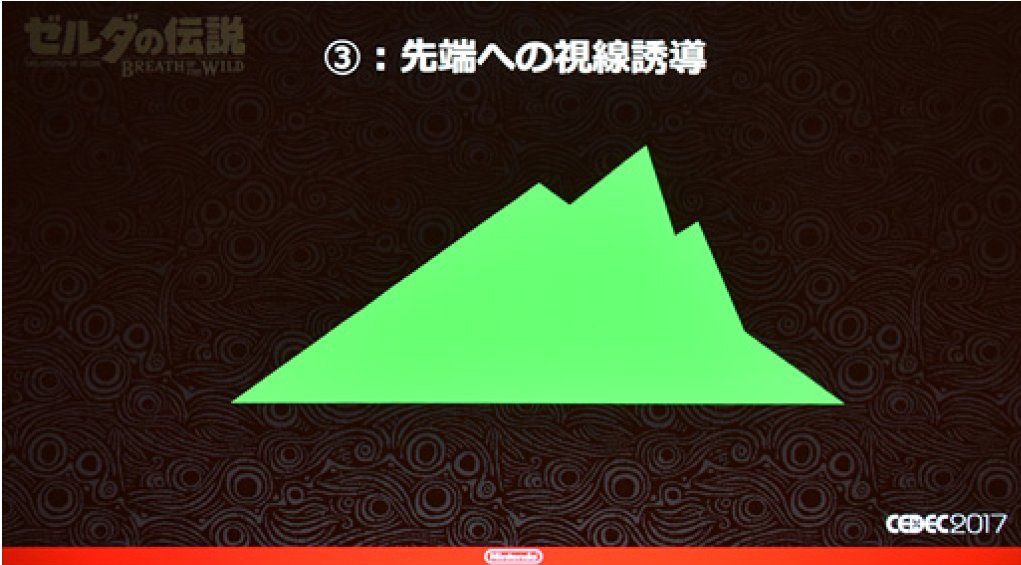 Triangles also varied in size. Here’s an example of the different scale and sizes of such triangles. 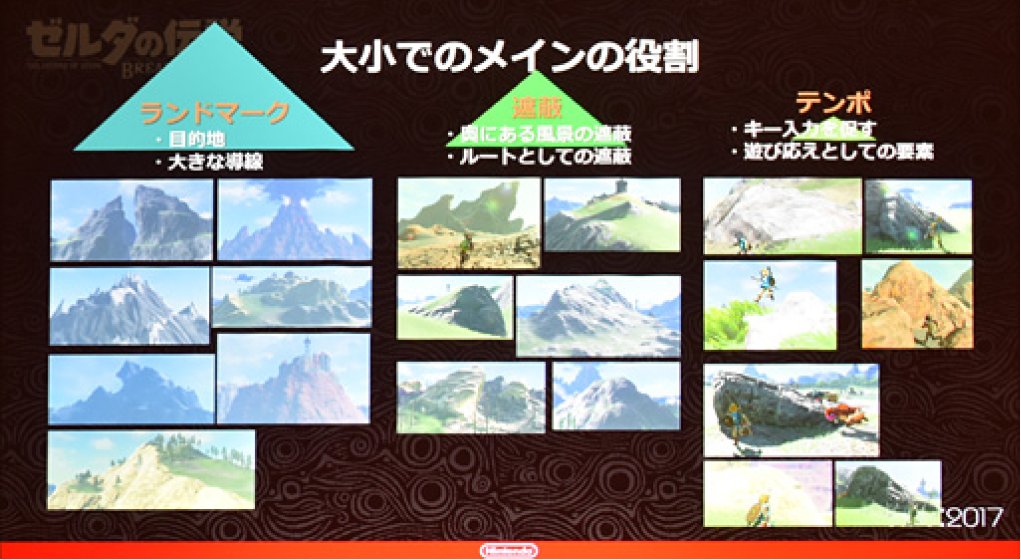 Other than triangles, another commonly used shape was rectangles. Rectangles serve as obstacles good for totally blocking something from the player’s sight and hiding things behind them.

A good way to visualise how the shapes were applied lies in this picture: 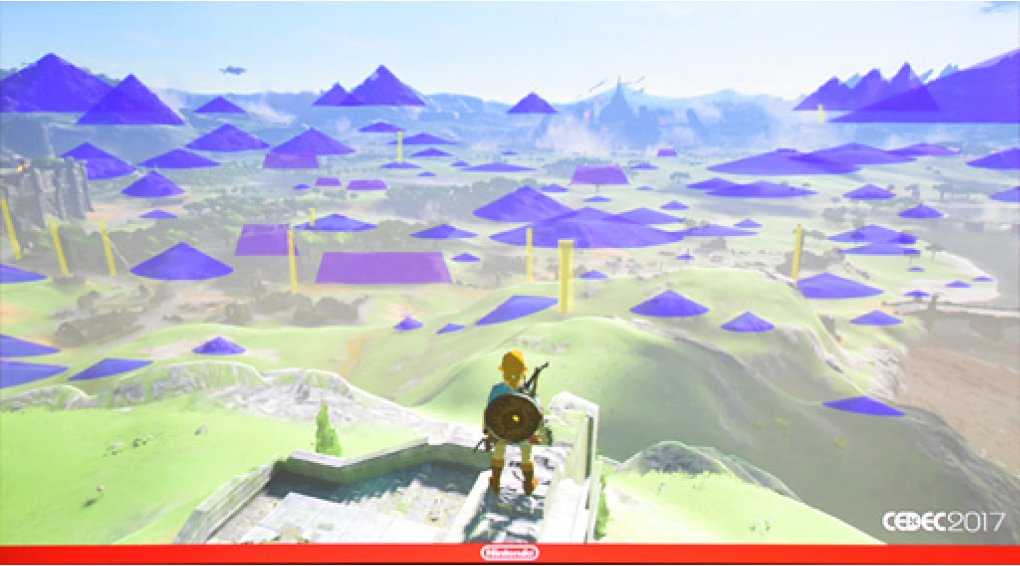 The following two pictures also show how the design helped hide structures until the player ventured further ahead: 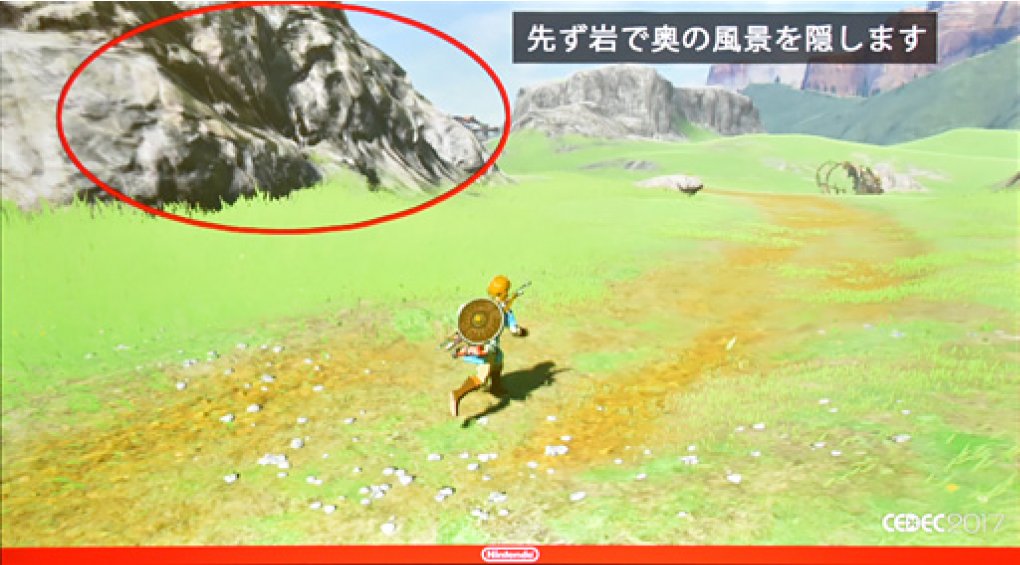 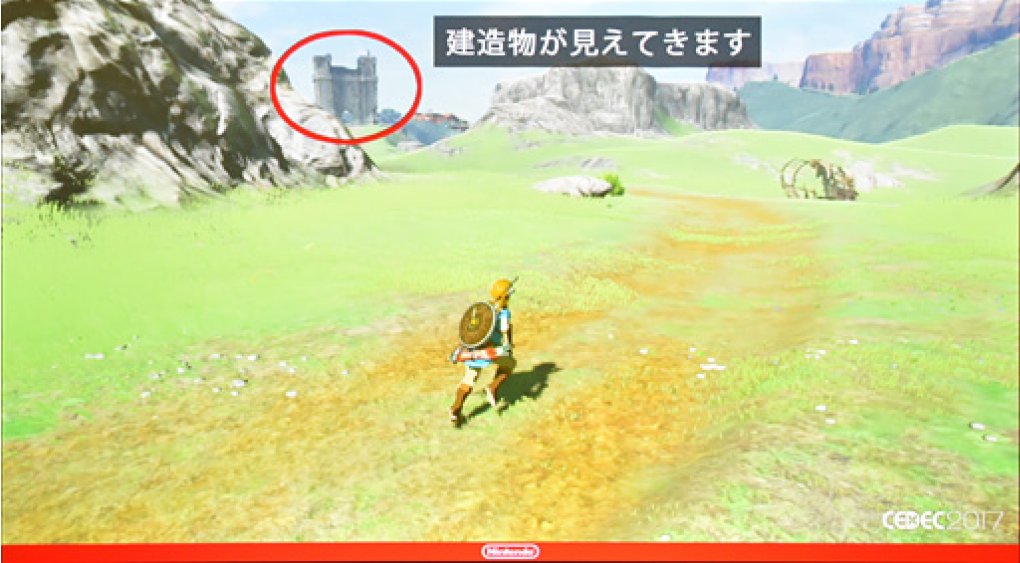 Much of the game was made, changed and refined. The development team looked at heat maps of where the players traversed and decided that they needed to refine the environment better to encourage players to explore the whole map. 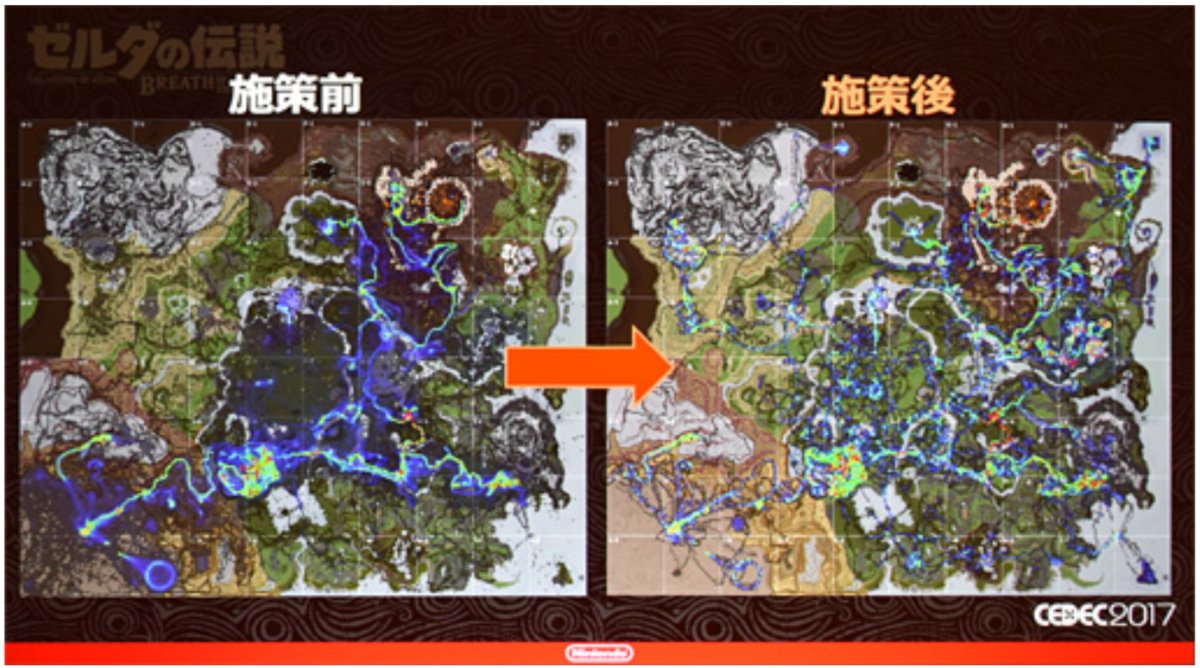 They initially thought that by spreading towers throughout the map and placing game events in between them would be the answer to the problem but then realised that it would not have provided them the experience they were trying to build. Players would feel too guided and hand held, and the story will feel linear. In general, the experience would be bad.

Eventually they came up with another solution. By placing structures of varying importance and visibility around the map, in different places, the game encourages the players to sidetrack for a moment to explore. This acts as a catalyst for what they call “infinite play” where players go back and forth between structures. 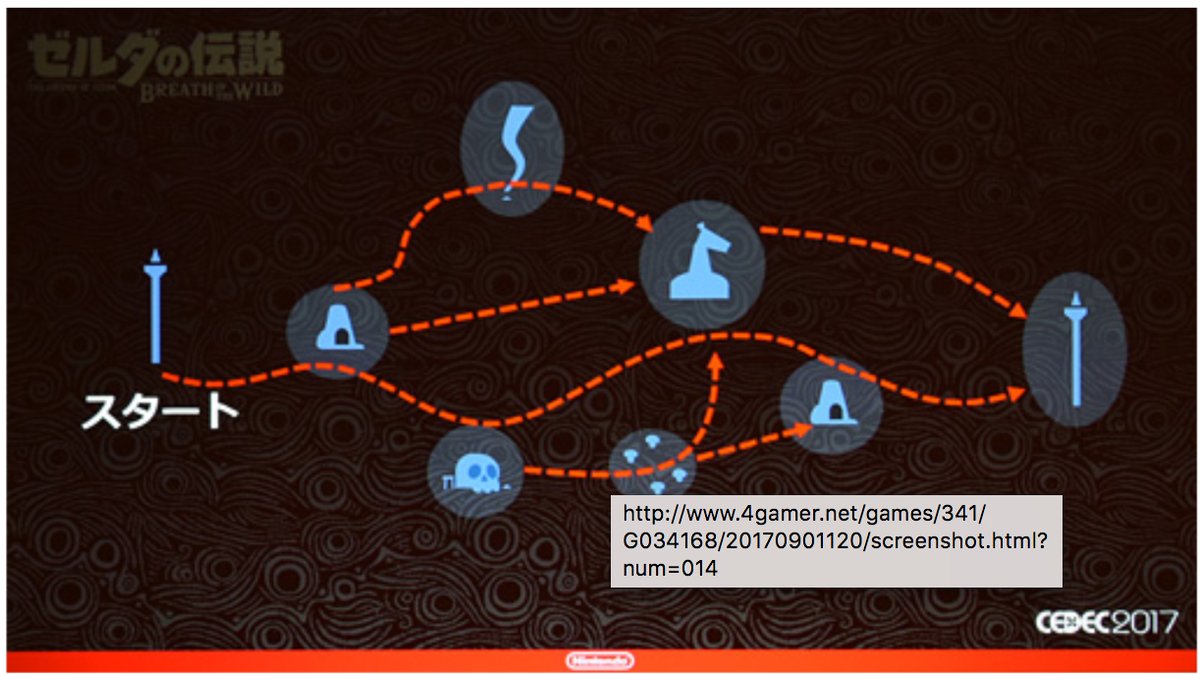 Here is how the structures differ in visibility: 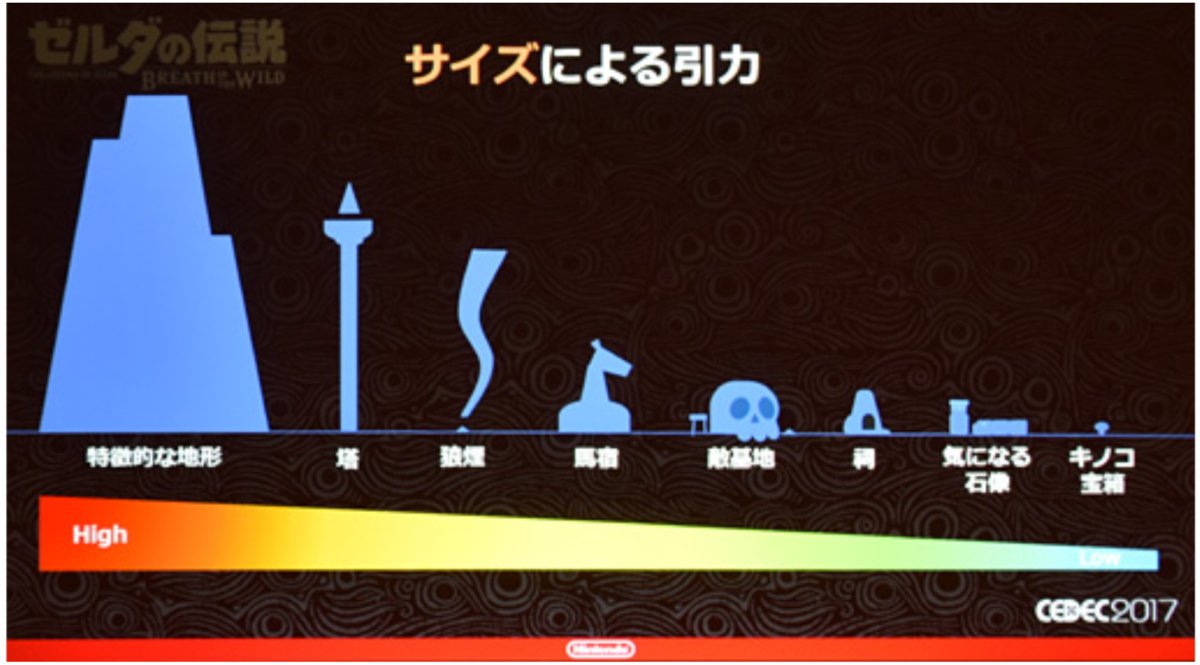 and here is how they differ in importance: 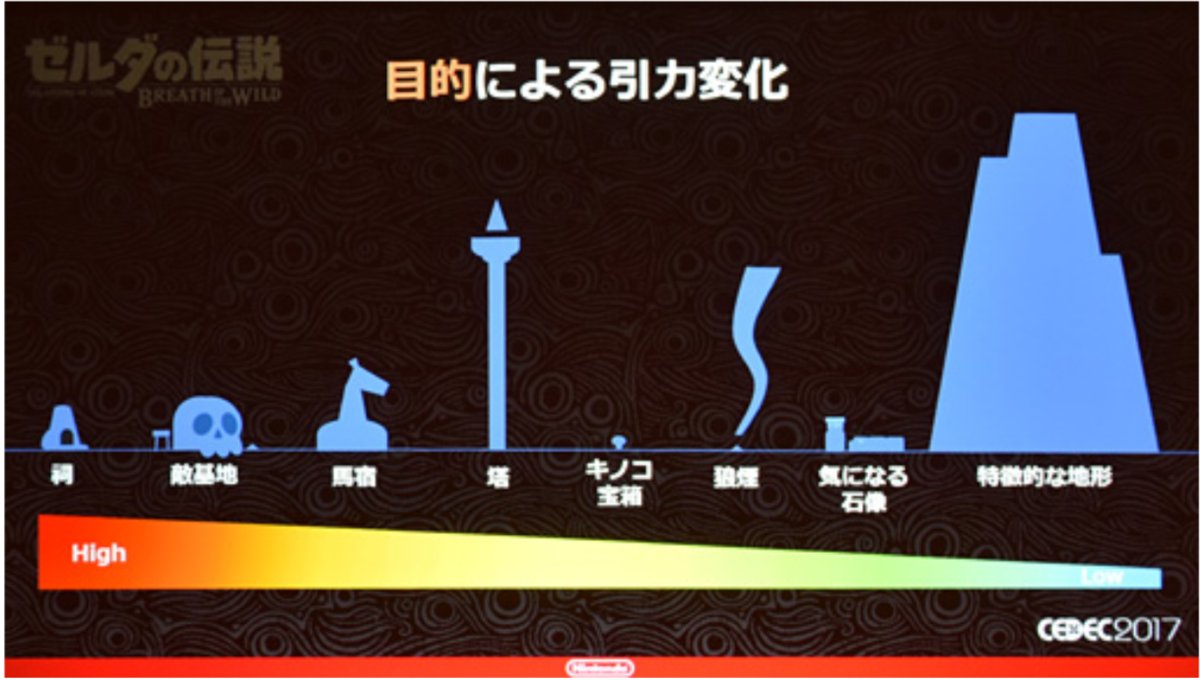 Of course, the order of importance will differ from player to player depending on their play style. Some may choose to visit more towers than shrines, while other may just want to climb mountains to look at the view.

In the IGN article, one of the developers had the foresight to see that the game will become too big to debug only at the end and therefore pushed for the game to be debugged simultaneously with the development. They implemented a new practise where they proactively fixed bugs blocking programmers or bugs specifically requested for fixing. They also made tools for the ease of bug reporting and managing, implementing the system in the game for bug finding.

All in all, Nintendo took on a monumental task of building The Legend of Zelda: Breath of the Wild. Nobody said it was easy and even the game was delayed multiple times. But at the end of everything, looking back at all their hard work, it is easy to determine that it was all worth it.