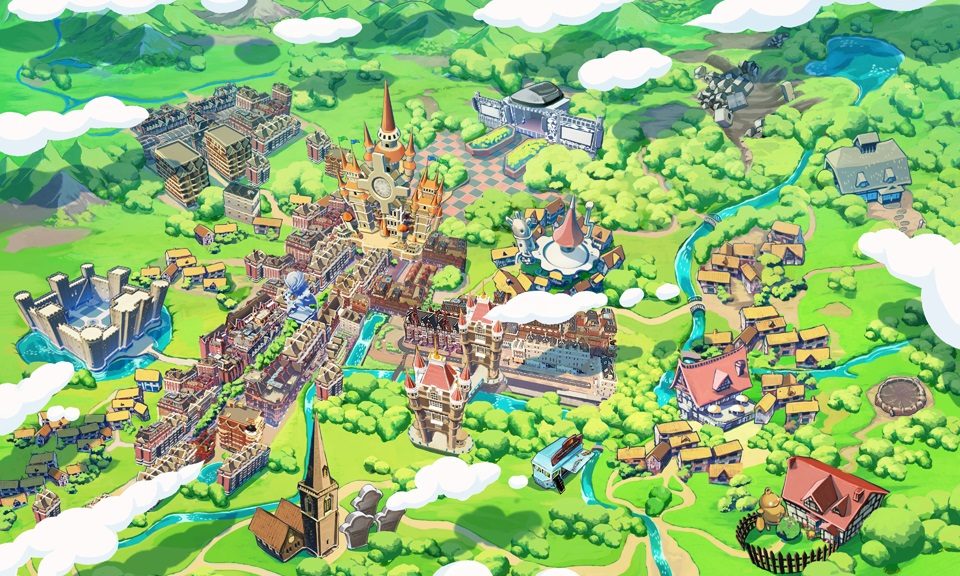 In an email interview with Gematsu, Yoshihiko Toda, Destiny Connect‘s director, shared a bunch of new information about the game.

In addition, the RPG will take about 20 hours to complete and will not feature any sub-quests. Also, no voice acting is being planned at present. Lastly, Destiny Connect will run in 30fps both on Switch and PS4.

The first thing one might notice about Destiny Connect is its unique art style compared to other Nippon Ichi Software titles. What was the inspiration behind this style?

Toda: “The goal for early production was to keep the feel of ‘90s Japanese Super Nintendo Entertainment System RPGs. It was also intended to keep the nostalgic feel while promoting highly unique 3D graphics (specifically EarthBound, Chrono Trigger, and other classic RPGs).

“Therefore, this project purposely employs a relatively unrealistic art style with cartoon-ish expressions. For example, you might see buildings rendered realistically, but the colors palettes are calm, few in number, and high in contrast.

“The art direction wasn’t particularly derived from any single inspiration more than it was a product of trial and error.

“The director intentionally emphasized the notion of actively avoiding the same aesthetic style as other Nippon Ichi Software games. He believed other directors were capable of creating games following the Nippon Ichi style, so for him to create this game as his own unique creation was a product of his creative deviation.”

The art style reminds me quite a bit of an old American computer animated television series called The Adventures of Jimmy Neutron: Boy Genius. Have you ever seen it?

Toda: “Sorry, I actually didn’t know of this until I was asked. I had to go look up Jimmy Neutron online. The game does feel like it has similar aspects, but it was not intentionally drawn from. As mentioned, the style wasn’t targeted directly as a result of external influences, but was a product of several unrelated contributing factors.”

Who is the main art designer and composer on the project?

Toda: “The art director is our company’s 3D designer, Yu Inaba. Our composer, Yukinari Irumagawa, works with an external company.”

When did development begin? Can you give us an idea of how the pitch went for this project?

Toda: “The early conceptualization began at the end of 2016. Our company, who usually specializes in 2D games, initiated the project with the decisive vision of making a 3D game. It was also during this time the art direction and the time travel concepts were developed.”

What kind of RPG is Destiny Connect? For example, is it hub-based with fields that players access by opening a map?

Toda: “The fundamental gameplay of Destiny Connect is an RPG where the user gets to control the main character, Sherry, through Clocknee Town. The stage unfolds in Clocknee Town, with the underlying objective of exploring the town. The story will unravel as you travel through the present, past, and future of the town.” Destiny Connect uses a turn-based battle system. How did you approach adding flavor to combat while still trying to evoke a sense of nostalgia?

Toda: “Command battles have been around for a while, I felt that the core system remains loyal to the classics, and from there, we designed battles to include Isaac’s ‘transformation’ and unique ‘skills’ to effectively carry out battles in a manner that’s refreshingly nostalgic.”

Were there any specific video game-related inspirations for Destiny Connect in terms of gameplay systems?

Toda: “I didn’t really draw inspirations from any single games directly… It was more of an accumulation from an entire era of RPGs that formed a single amalgamation that was the nostalgic feeling from reminiscing about my youth playing those games.

“For Isaac’s transformation, however, I did draw inspiration from the Japanese TV hero-drama Kamen Rider and how they transformed, shifting abilities for each of those different forms.”

What were your goals in terms of creating the cast of Destiny Connect?

Toda: “The main characters being a girl and a robot was established in early conceptualizations. There was a base story of the girl and a robot facing dilemmas together, and from there, we added her friends to give more substance to the story.”

Can you speak to the overall length of the game?

Toda: “Playing normally, it will take roughly 20 hours to complete the game.”

Will there be any additional activities outside of the main story, such as sub-quests?

Toda: “In early production, we did have sub-quests that strayed from the main story, but many things happened, and we needed to focus on development of the main story. For that reason, there are no sub-quests in the game. If an opportunity arises in the future for a sequel, I would definitely like to include them.” Isaac can change forms, which in addition to specialized abilities grants him different outfits in battle. But will there be additional outfits for the human characters?

Toda: “Only the main character, Sherry, will have a ‘changing’ feature where she will be able to change her appearance. You will be able to unlock a number of outfits for Sherry by collecting items throughout the game.”

Will Destiny Connect have voice-acting?

Toda: “Unfortunately, voice acting is not planned at this time.”

Can you speak to the game’s performance on each platform? What resolution and frames per second is each platform targeting?

Toda: “Both PlayStation 4 and Switch run at 30 frames per second.”

What do you hope players will take away from Destiny Connect?

Toda: “I’m sure all of us at some point experienced excitement as children, reading adventure books and watching movies (they vary from person to person, but some common ones include: Back to the Future, The Goonies, and The NeverEnding Story). I would like people to play this game with the same intent of re-experiencing those classic adventure films and books, and would be overjoyed if people felt the same sense of nostalgia as if reminiscing on their childhood experiences.”