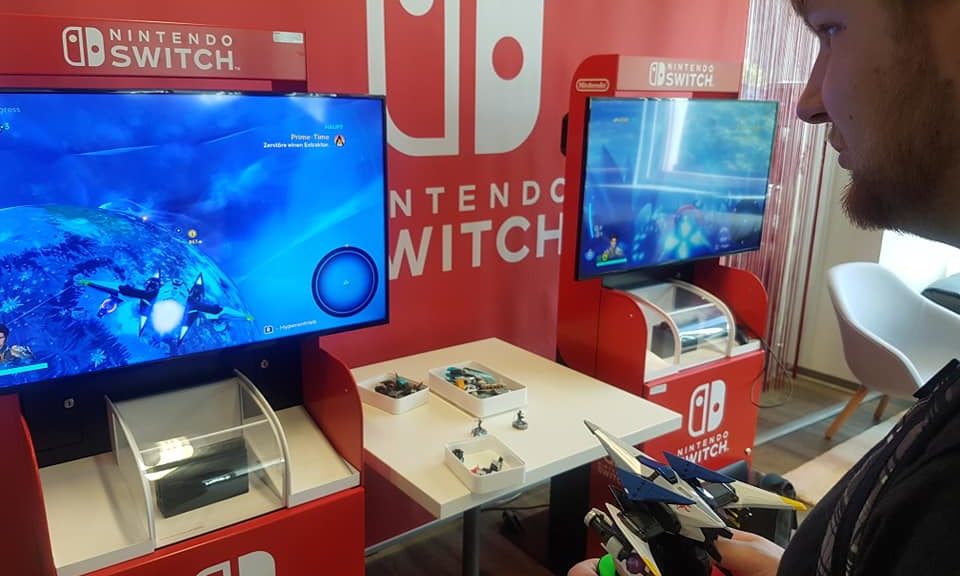 Nintendo invited us, NintendoSoup, to their European headquarters in Frankfurt (Germany). I, Manuel Wiese, your German correspondent, took the the chance to play all the shown games there.

And yes – it was a blast! The E3 Direct was not the greatest –watch the Nintendo stock… – but the line up for 2018 is really great. And Nintendo of Europe showed the press all relevant games for this year.

Before I started to play my first game, I met the guys from the Facebook group “Nintendo Switch 4ever!” and the leader of “NintendoConnect Aschaffenburg”. We formed a little group now to play Super Smash Bros. Ultimate and Monster Hunter Generations Ultimate together.

Super Smash Bros. Ultimate really feels like an ultimate version! The handling is perfect, they balanced the game in a new way and –yes– it’s fast, really fast! Melee fans will love it. And the graphics are so good… We could only play with a few characters, but you got a great insight into the game. I would say: MUST HAVE! My first impression was a 10/10. 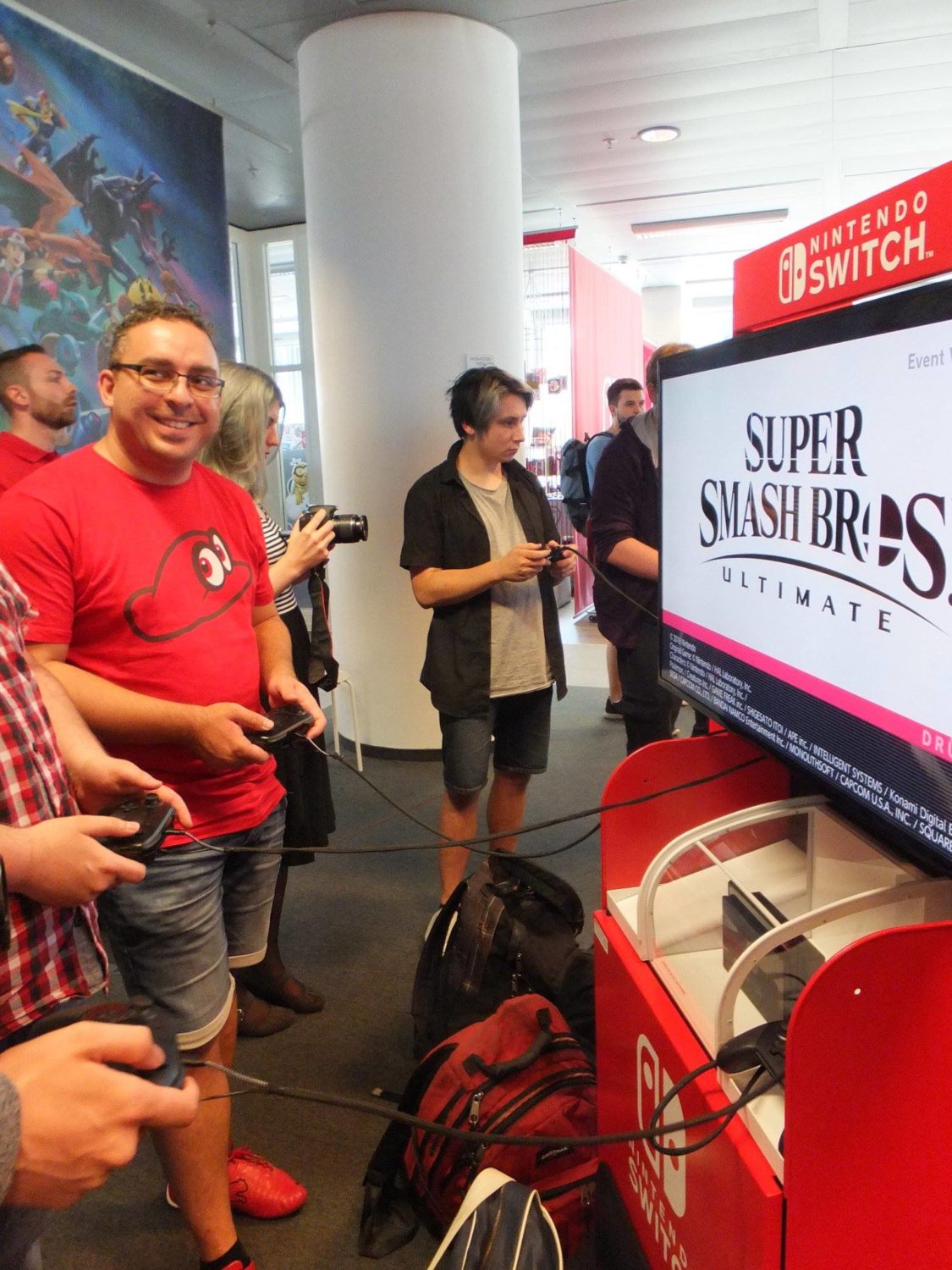 The next game I played was Monster Hunter Generations Ultimate. The next ultimate version?! Yes again! The game seems to be huge. Over 90 monsters are on board – and the gameplay we all love from the Wii and 3DS versions. The graphics are only average, but OK, it’s a port. I would give it a 9/10, if you are not a fan of the series, Monster Hunter maniacs can rate it 10/10.

Then it was time for a little presentation. Chris from Nintendo of Europe showed us two games on a special monitor, Pokémon Let’s Go and Super Mario Party – you weren’t able to play Super Mario Party there by yourself. 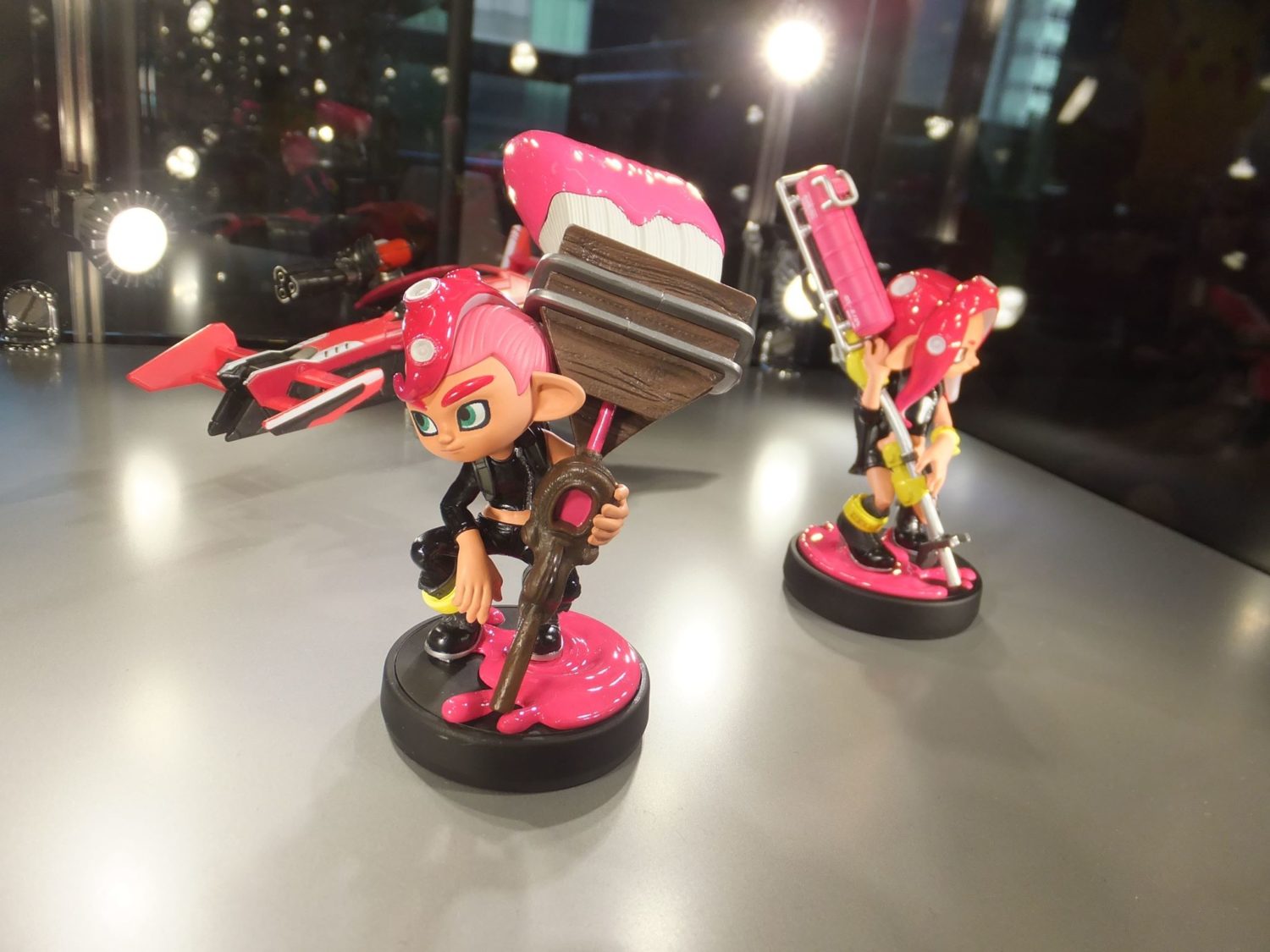 In Pokémon Let’s Go the catching is inspired by the smartphone game Pokémon Go. But you can level up like in the main series! You gain experience points through catching Pokémon. You are able to avoid Pokémon fights, you can see the monsters on the map, but you have to fight every trainer you meet. A very nice game, your partner – Eevee or Pikachu – are sitting on your head or your shoulder and one Pokémon is always following you. Great fun! And – your rivals are more friendly in this game than before: they give you tips and items and tell you a lot about your journey. But the best feature is the catching by the new Pokéball Plus – it feels so great! You could try it out by yourself later after that little show. Pokémon Let’s Go has a great potential to attract smartphone and handheld gamers, my first impression was very good 9/10. 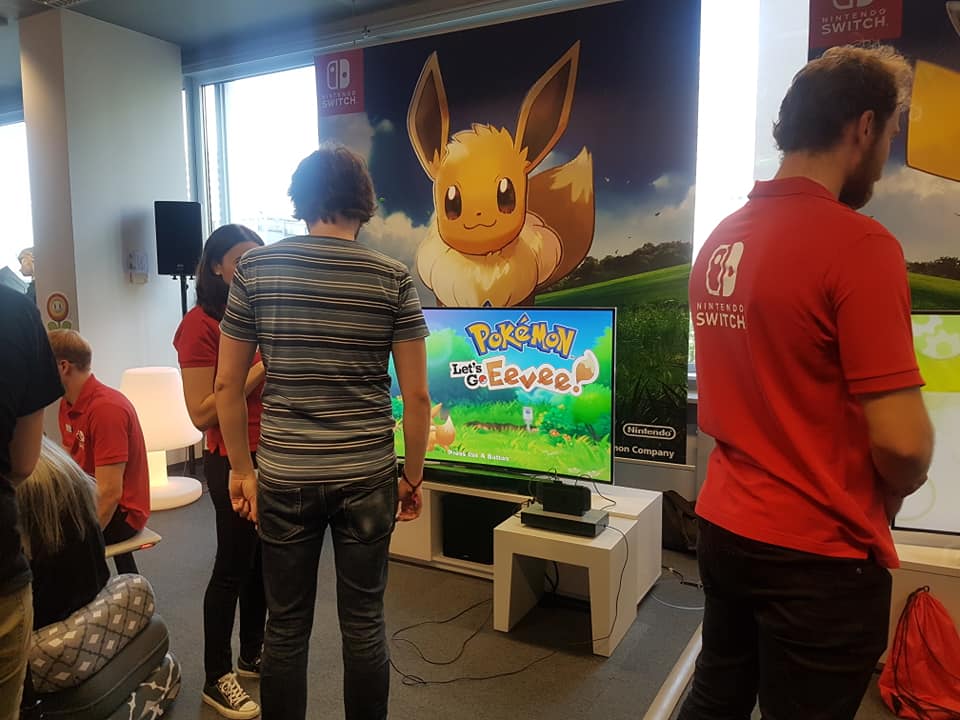 And Chris played a second game, Super Mario Party. He told us that the completed game will offer 80 awesome minigames – some of them were shown by him. We weren’t allowed to take any photos, they were top secret! He played a game called “Slaparazzi” in which you had to fight each other to be photographed. Sounds strange? It is, but it’s funny! Another one was “Sizzling Stakes”, you had to grill some steaks by using your Joy-Con. And “Trike Harder” was a trike race. You can play the game with four Joy-Cons. He demonstrated us the team mode, 2vs2, and told us that every character has now a specific dice. Yes, that makes the game more tactical. Super Mario Party looks like the perfect combination of the old and new features of the series, I think a lot of people will like it. Another 9/10! 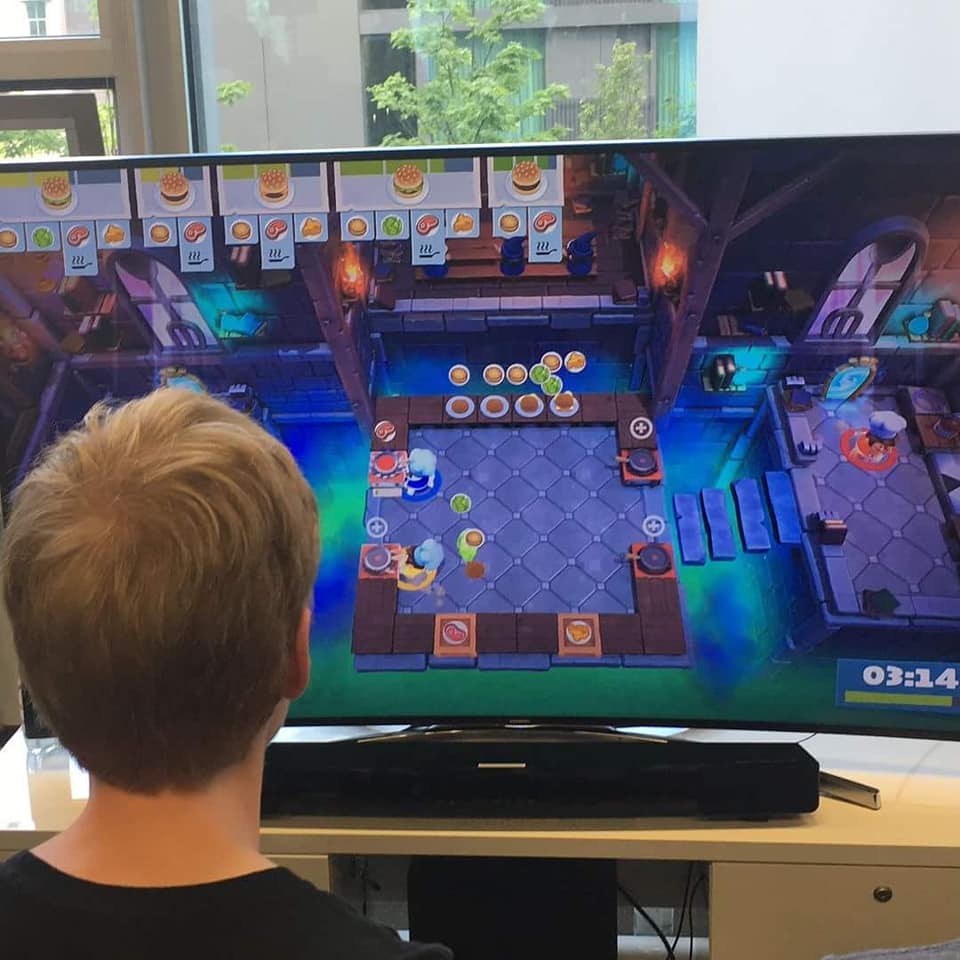 I could play FIFA 19, Mario Tennis Aces, Paladins, Fortnite, Overcooked! 2 and Killer Queen Black too, all great multiplayer games. Especially the last one could surprise in a positive way, don’t forget the name “Killer Queen Black” from now on.
Starlink. Battle for Atlas was there too. The Ubisoft shooter which was presented by Miyamoto himself @ E3! The control by ship –yes, you can use a spaceship-Joy-Con-mixture as a controller– was funny, Ubisoft could land a big hit with it! It’s inspired by the great Star Fox Zero on Wii U, I think Star Fox fans can look forward to it. It’s an 8/10 for me. 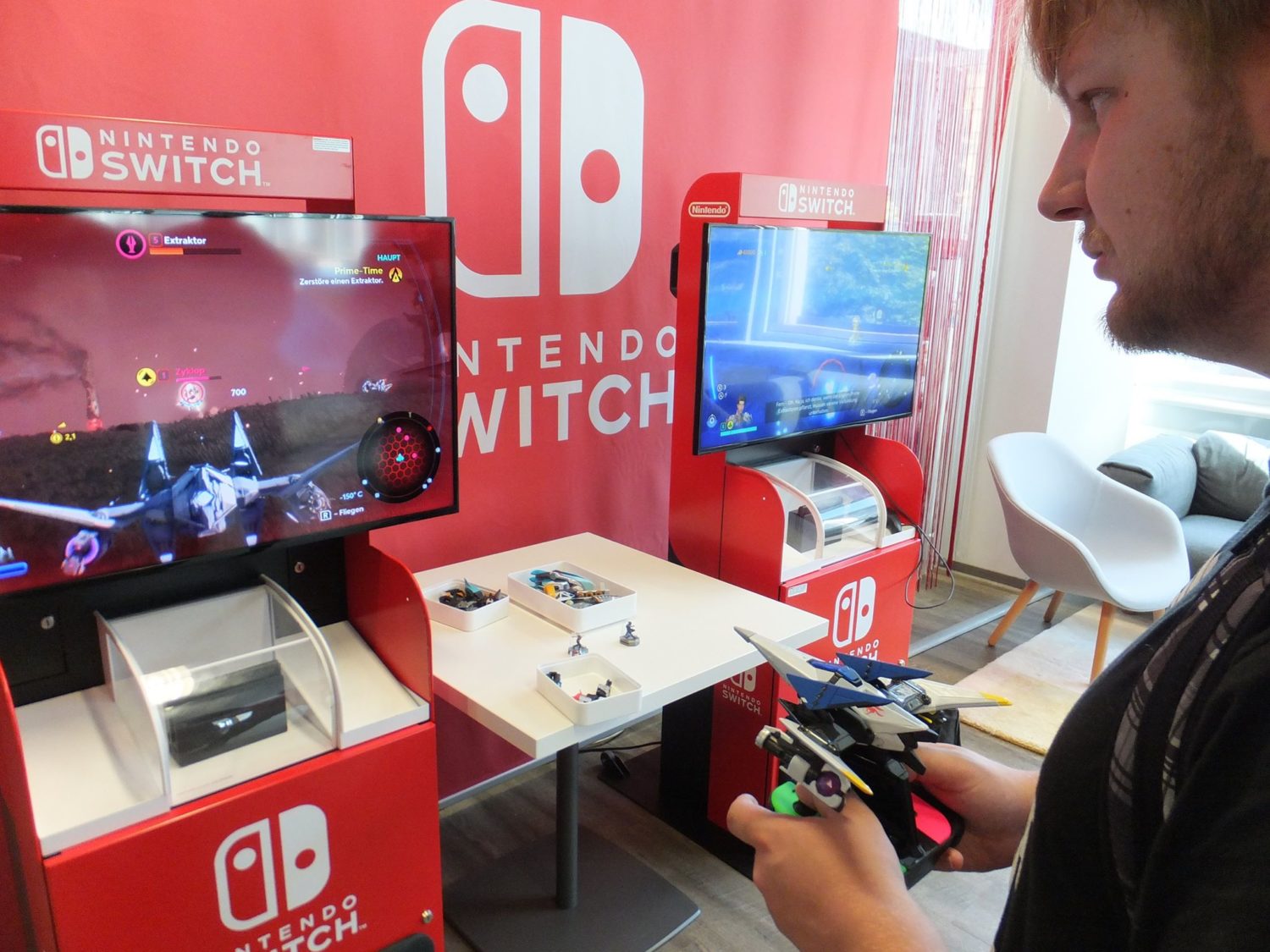 After playing and eating a lot –breakfast & lunch & a cake– I went home and said goodbye to the guys of “Nintendo Switch 4ever!” and “NintendoConnect Aschaffenburg”. We had a great time together by playing Nintendo, Nintendo’s new multiplayer games will make the Switch a must have console for families and parties.