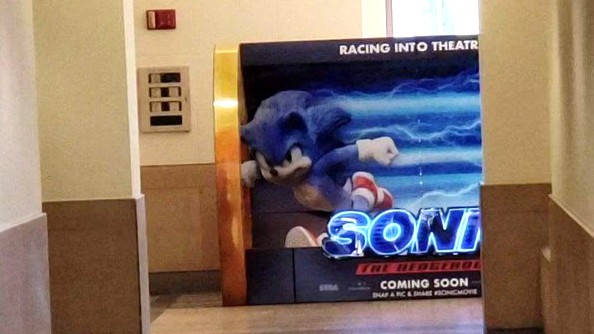 Earlier this month, a rumored leak seemingly revealed Sonic’s movie redesign – months after Paramount announced that it would be reworking Sonic’s uncanny movie look. Well, that rumored redesign might not remain hearsay for long!

Thanks to @pablothinghouse, we have what appears to be an actual photo of the redesign in the wild – as part of a new movie standee! While its location remains hush-hush for now, the standee is exactly like one of the rumored leaks, which depicts Sonic with more cartoonish proportions.

Check it out for yourself below.

at this point its going to spread like wildfire, i posted the image to the public first and i didn't take a photo. pic.twitter.com/U1OHewhdp5

As with all unverified information, we urge our readers to remain skeptical of this redesign. The absence of Sonic’s Puma-sponsored shoes in these new designs may or may not debunk it – so we’ll just have to wait until Paramount Pictures makes an official statement in the future.

What do you think? Is this for real? Would you be happy if this was the final redesign? Feel free to share your thoughts below!